Books and Art from the Veatchs Arts of the Book 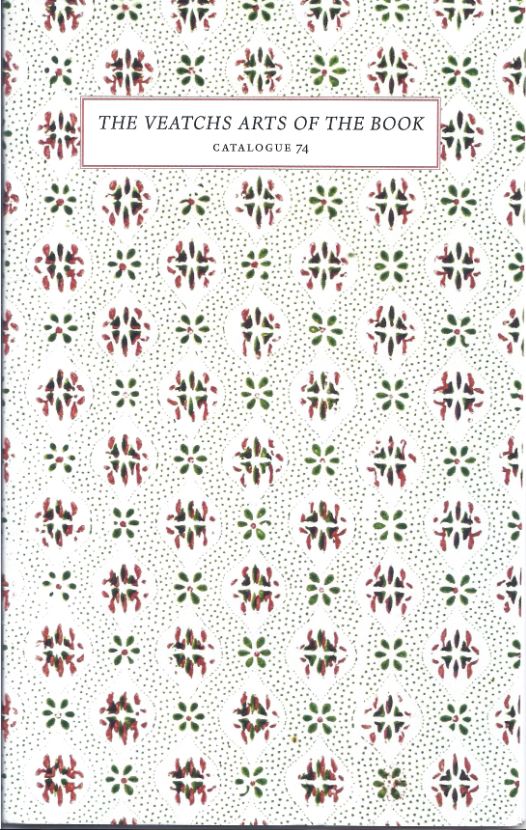 Arts of the Book.

The Veatchs Arts of the Book has issued a new selection of works in the “books about books” and book arts fields. This one is their Catalogue 74. It includes items from such areas as private presses, fine bindings, specialty papers, specimen books, leaf books, and similar topics. These are books that will catch your eye. Here are a few.

Item 5 is The First Part of the Histoire of the Valorous and Wittie Knight-Errant Don-Quixote of the Mancha. This two-volume, 1927-1928 set came from the Ashendene Press of Charles Henry St. John Hornby. This one features woodcut decorative letters by Louise Powell, and the Veatchs note that this was atypical of Honby's work. It is the only one of his works with such ornamental calligraphy, similar to the work done at the Kelmscott Press. This copy is bound in full dark green morocco by W.H. Smith and Sons. Ashendene bindings produced by Smith were the work of noted bookbinder Douglas Cockerell. Priced at $8,000.


Item 107 is An Essay by William Morris & Emery Walker. It was printed neither by Morris' Kelmscott Press nor Walker's Doves Press. Rather, it was the first work from the press of a man who would become more famous for other aspects of printing. It was printed by the Village Press, then of Park Ridge, Illinois, in 1903. It had been set up by Frederic Goudy, in the early days in partnership with Will Ransom. Goudy was inspired by Morris' work, and the book followed a similar style. The book was printed in Goudy's Village type, the first he designed, which was inspired by one Morris used at Kelmscott. In the years ahead, Goudy would print many more books, but he was even more prolific in designing types, for which he is remembered today. He designed over 100, some still in use. $600.


For those interested in American bibles, here is a one-book shortcut to an extensive and important collection: The American Bible, Original Leaves from Rare and Historic Bibles printed in the Colonies and the United States during the Seventeenth, Eighteenth, and Nineteenth Centuries. The book contains 38 leaves from original bibles. Included are the Eliot Indian Bible, the first printed in America, along with others in indigenous languages, plus the first complete American bibles in English, French, Hebrew and Spanish, and the first New Testaments in Greek, Portuguese, Dutch, and Swedish. Other leaves from important English bibles are included, along with one from a hieroglyphic bible for children printed by Isaiah Thomas. While the bibles represented are all quite old, the leaf book, with introduction by Michael Zinman, was published in 1993. Item 13. $6,000.