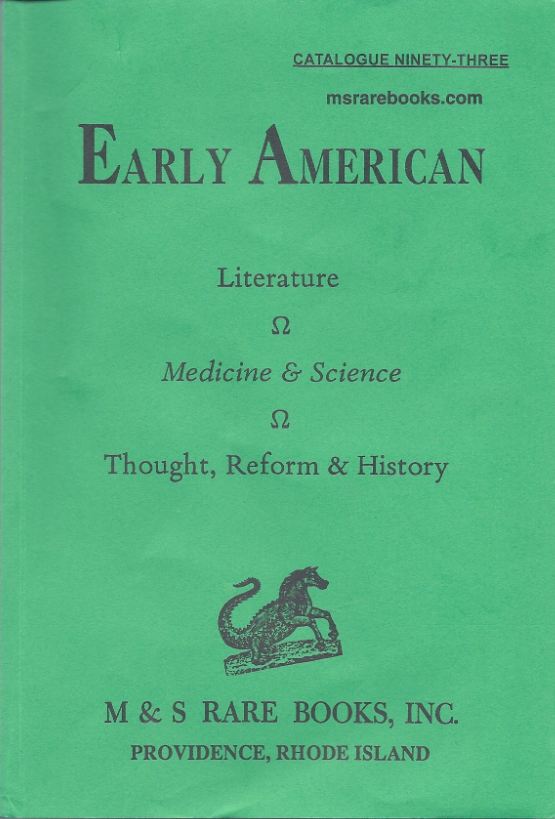 M & S Rare Books has released a catalogue of Early American Literature, Medicine & Science, Thought, Reform & History. That may not include everything in the field of early Americana, but a lot of ground can be covered with those subjects. To that we will add these items are not limited to books. There is much in the way of shorter form printed material, such as broadsides, and many manuscript works. In fact, there are many manuscript collections, numerous documents part of a family collection, diaries kept by individuals, and other sizable groups of material. For the most part, these collections originated in the 19th century. These are a few of the items you will find in this new catalogue.

Harriet Beecher Stowe wrote perhaps the most influential book of the 19th century, her 1852 publication, Uncle Tom's Cabin, firing the abolitionist movement like no other work. However, in 1830, she was still a teenager, noted, if at all, as well-known minister Lyman Beecher's daughter, or the little sister of women's education reformer Catharine Beecher. In that year, the younger Miss Beecher gave a copy of her older sister's book, Suggestions Respecting Improvements in Education... to a friend. She inscribed it lightly in pencil, “Miss Mary Ann Giles, from her friend, H. Beecher, Boston, March 20, 1830.” Item 131. Priced at $2,500.


Harriet Beecher Stowe took lots of grief in the South for her book, but probably none any worse then that inflicted on her brother, clergyman Henry Ward Beecher, by Virginia publisher George Bagby. He published this pamphlet, under the pseudonym “Virginian,” to urge people not to attend a lecture by Beecher in Richmond in 1877. Though not a political figure, Beecher was likely the most influential man in America during the era, though his reputation had recently been tarnished by scandal – an alleged affair with a friend's wife. Beecher had been a strong opponent of slavery and Union supporter during the war. The Virginian Bagby was not about to let bygones be bygones, even though the war had ended more than a decade earlier. He writes, “Consider this being in the shape of a man, whose picture disgraces our walls, whose long lecherous upper lip, swine's eyes with drooping lids, narrow bigot's forehead, lank puritanical hair, and pudgy fingers...” Enough. You get the idea. Item 29. $600.


Item 160 is undoubtedly the most important inaugural address ever given. However, it was not momentous for its content. Item 160 is the Inaugural Address. President Wm. H. Harrison, delivered in 1841. William Henry Harrison was the first (of two) Whig presidents, swept into office over the incumbent Democrat Martin Van Buren, the result of a lingering recession. Harrison was one of our oldest presidents, elected at the age of 68, more on change than specifics of his platform. Nonetheless, he had a lot to say the day of his inauguration. Too much. He read the words of this inaugural for two hours, inadequately dressed for the freezing temperatures that early March day in Washington. It weakened his resistance. Harrison took ill, became bedridden, and never recovered, succumbing a month after taking office. This undated broadside appears to have been printed shortly after the address was given, perhaps the first such printing. $5,500.


Item 316 gives us a look at rapidly developing transportation options in the first half of the 19th century. It is the Report of Examinations and Surveys of a Route for a Rail-Road from Canajoharie, Situated on the Erie Canal, to the Village of Catskill, on the Hudson River, by Lt. John Pickell. This was published in 1831, though the railroad was incorporated in 1830. One familiar with New York State geography might wonder what the need was for connecting these two small towns. Their locations by the Erie Canal and Hudson River is the explanation. The Erie Canal, that major gateway to the West, which enabled goods to be affordably shipped from much of the American interior to a port (New York), literally opened the West to trade in 1825. And yet, only five years later, a railroad was contemplated to cut-off a portion of that water route, providing a quicker path and avoiding some of the tricky waters of the Hudson. Canals, the major source of inland transportation, were quickly being overtaken by rails, just a decade old at the time. It was estimated that the railroad could make a go of it with 72 tons of cargo per day. However, while the railway did open for part of the distance in 1836, it was never completed before going broke. $175.


Item 373 is the Instruction Book for Matheson 1910 Model 18 Six-cylinder Car. It includes color plates of different models. If you are interested in a Matheson, you will probably have to settle for this instruction book. There aren't many still on the road. Matheson was formed in 1903 in Michigan, moved to Massachusetts, and then Pennsylvania, where they opened a large assembly plant. Unfortunately, by 1912, the company was in receivership and the last cars in inventory sold. $500.


Item 4 is an apparently unknown broadside from the dawn of American flight. This is not the Wright Brothers, but noted American balloonist John Wise, from the beginning of American aeronautics. Wise began testing his balloons in 1835. He had high aspirations when this broadside was printed in 1839, announcing a flight from Allentown, Pennsylvania. For 50 cents, you could hear various presentations, and in the afternoon, watch Wise alight to the skies. At two miles in height, you could witness Wise drop a dog in a parachute, “which will reach the earth in safety.” That quote would have been reassuring to the dog, who must have been scared witless when pushed out of the balloon. Wise was a believer. He obtained the first air mail contract, but reached the wrong location. He was hired to scout enemy positions during the Civil War, but got caught in the trees. He made a major discovery, the upper air currents that constantly flow west to east, and planned to ride them to Europe, though that never happened. Finally, in 1879, at the age of 71, Wise took off in his balloon from East St. Louis. Neither he, nor his balloon, was ever heard from again. The body of a passenger was found in Lake Michigan, the likely answer. What Wise was never quite able to master was how to steer these things. $30,000.