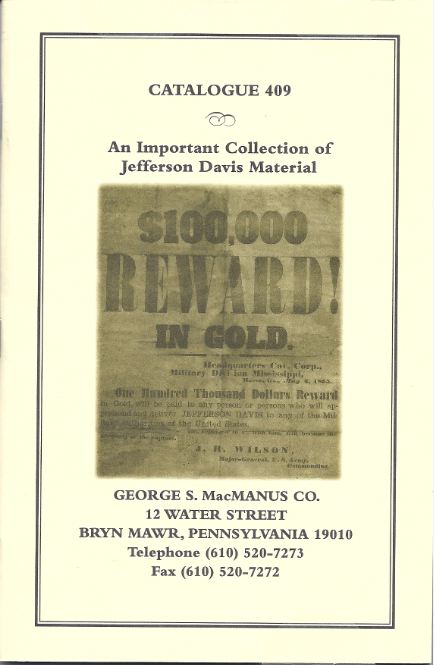 The most important movie in theaters today is an account of President Lincoln's final days of the Civil War. Such happens when you are on the winning side. The president of the losers, Jefferson Davis, may not receive such approbation, but he is recognized in the latest catalogue of the George S. MacManus Company – An Important Collection of Jefferson Davis Material. Some see him as a patriot, others as a traitor, but whatever one's view, he played a significant role in American history, as leader of the nation's most notable lost cause.

In his earlier years, Jefferson Davis attended West Point, served in the military, went back home to Mississippi to operate a plantation, and married the daughter of future President Zachary Taylor. She died 3 months later, and Davis did not remarry for another 10 years. Davis began to draw national attention for his performance during the Mexican War. The result was he was appointed to fill out a senate term in 1847, and was elected to the office in 1848. He resigned in 1851 to run for Governor of Mississippi, but lost a close election. He ran on a states rights platform against the last unionist to win in the state. He was soon back in government service, appointed Secretary of War by President Franklin Pierce. With the end of the Pierce administration, Davis again ran for the senate from Mississippi and won. He was still serving as a senator when secession came.


While a firm believer in states' constitutional right to secede from the union, both before and after the war, he was never one to favor actually seceding. When Mississippi officials gathered in 1861 to respond to South Carolina's secession, Davis opposed joining in. However, once the state seceded, Davis handed in his resignation to the U.S. Senate and offered his services to Mississippi. However, due to his stature and service as U.S. Secretary of War, he was called on to serve as the provisional President of the Confederate States (and President a year later).


Davis' tenure as the only President of the Confederacy is controversial. While General Robert E. Lee would become a great hero in the South for his field command, Davis' overall management of the war, as well as diplomatic, financial, and other aspects of leadership, is generally considered to have been less than outstanding. Lee would exit the war a hero, Davis not so much so to southerners. However, Lee died a few years later, while Davis lived until 1889, in effect regaining the role as symbol of the South for unreconstructed confederates. He would continue for the rest of his life to support confederate veterans, and argue the justness of their cause and for the constitutional right to secede, though, again, opposing actually taking such action.


Davis was imprisoned after the war and was set for trial on charges of treason. However, those charges were later dropped, and after two years in prison, and with bail supplied by, among others, noted abolitionists such as William Lloyd Garrison and Gerrit Smith, he was freed. He would travel to Canada and England, but returned to the U.S. for the remainder of his life. After his death, his widow, Varina Davis, would continue loyally to promote his legacy until her death in 1906. Now, it is time to take a look at a few items in this catalogue.


Many biographies were written about Davis after the war, but here is the first one, written early in his public career. Attributed to “A Citizen of Mississippi,” believed to be Jackson lawyer Collin Tarpley, it is titled, A Sketch of the Life of Jeff: Davis, the Democratic Candidate for Governor. It was published for his unsuccessful 1851 campaign. The pamphlet describes Davis as holding unswerving loyalty to Mississippi (states rights) as well as being imbued with selflessness, integrity, honor and devotion to his state. Item 204. Priced at $7,500.


Item 132 is one of Davis' earlier important speeches, Speech of Mr. Davis, of Mississippi, on the Subject of Slavery in the Territories. It was given in the Senate in February, 1850, and opposed the Compromise of 1850, which limited the extension of slavery to new territories. Davis hits the usual notes about interference with southern affairs and rights, though adds a novel argument in favor of allowing slavery to extend to the territories. He points out that it doesn't increase the number of slaves, and claims that when slaves are more spread out, rather than concentrated in large numbers on plantations, their care is better. “It is only when the slaves are assembled in large numbers, on plantations, and are removed from the interested, the kind, the affectionate care of the master, that it ever can partake of that cruelty which is made the great charge against it by those who know nothing of it...” claims Davis. $125.