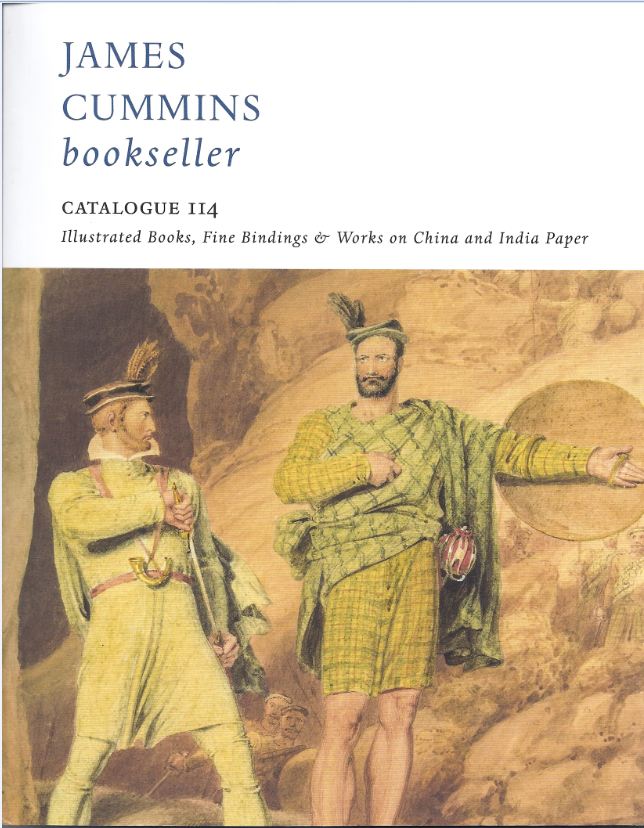 Catalogue 114 from James Cummins Bookseller is headed Illustrated Books, Fine Bindings & Works on China and India Paper. The common thread is attractiveness of appearance. That is not to say there aren't worthy texts here, but rather that appearance was the primary concern when they were produced. Some feature fine bindings, printing, and other external features, while others are noted for illustrations within. Several are privately made albums of illustrations, including original artwork and prints. This is essentially a collection of books and paper as art, and as such, it is harder than most catalogues to describe with words. But, we shall give it a go. Here are a some examples.

Gustave Doré was a French artist, illustrator and engraver of the 19th century. Doré displayed his artistic skills at an early age, and by the time he reached his early 20s, was being selected to provide illustrations for important works. In 1855, at the age 23, he was selected to illustrate an edition of Les Contes Drolatiques (Comic Tales) by Honoré de Balzac. Doré provided 425 wood engravings for this work. It is cited as his “early masterpiece.” The wood blocks for these engravings were later purchased by the firm of Garnier Freres, which released editions in 1861 and 1867 (and more later). Item 43 is a copy of the 1867 second Garnier edition, and one of what was probably a small number printed on China paper. Priced at $2,250.


What could be more beautiful than a book of pin-up girls? This was probably as close as one came in 1834-35 when Edward Finden released in 13 parts Finden's Byron Beauties: A Series of Ideal Portraits of the Principal Female Characters in Lord Byron's Poems. This is a collection of 39 portraits of women who appeared in Byron's poems. How Finden knew what they looked like is unclear, especially fictional women. Perhaps he assumed that the women in Byron's poetry must be beautiful. Lord Byron was no longer around by then to give judgment, but my guess is he would have approved. Item 29. $1,750.


Next we have a collection of far less attractive portraits, or at least, portraits of far less attractive people. Item 72 includes 40 original watercolors produced by Auguste Raffet (circa 1847) to illustrate Lamartine's L'Histoire de Girondins. The Girondists were a moderate anti-monarchy force during the French Revolution, first leading the way, but later overcome by more radical elements, many of their members ending their lives at the guillotine. However, with 39 of the 40 illustrations being portraits, it is not just the Girondists who are pictured but all elements who played a role. Considering how many ended up at the guillotine, you would think portraits of heads would be sufficient, though these generally cover at least the upper body too. They range from King Louis XVI and his bride, Marie Antoinette, early visitors to guillotine, through Mirabeau, Marat, Charlotte Corday, Danton and Desmoulins, and finally, St. Just and Robespierre. None of the above survived the revolution, and only Mirabeau was fortunate enough to die of natural causes before all Hell broke loose. $40,000.


Item 69 is a most interesting set of hand-colored cards from 1824. It is called Panaramacopia. Designed by T.T. Dales, drawing master. The technical name for this is myriorama, a term with which you (if you are like me) may not be familiar. What it is is a set a of cards that can be placed in any order to form a consistent image. The edges of each card are designed to flow into the next, no matter what order you place them. This set shows a country setting, with some trees, buildings, and people in the foreground, a large body of water in the back. These myrioramas were a favorite of children in the day, just as similar mix and match illustrations are today. $4,000.