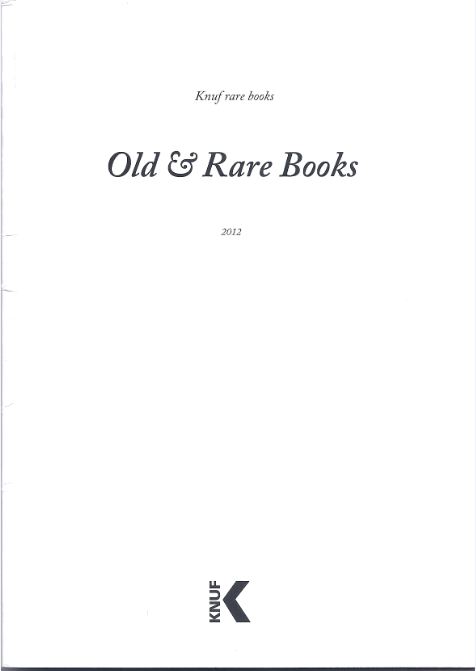 Knuf Rare Books has issued a catalogue of Old & Rare Books 2012. The Vendome, France, bookseller specializes in the “books about books” field. They offer bibliography, specimen books, typography, fine printings and bindings, and many dealer and book auction catalogues from centuries ago. Most works are from western Europe and England, with dates primarily ranging from incunable printings to the early 19th century, though a few later works do appear. Knuf has over 25,000 books in stock, but while some of the catalogues they offer contained numbers almost that large, this one includes 119 items. Here are a few of them.

We will start with An Act for the Better settling and Preserving the Library kept in the House at Westminster, Called Cotton-House, in the Name and family of the Cottons, for the benefit of the Publick. This work provided for the disposition of what is described as “the most important collection ever assembled by a private individual in Britain.” It's creator, Sir Robert Cotton, a baronet, antiquary, and MP, lived from 1571-1631, when books were still relatively recent and all sorts of material now unobtainable was still available. However, it was not the books so much as the earlier manuscripts which made this collection spectacular. Among the incomparable items was the Nowell Codex, which contained the only remaining copy of the seminal British poem Beowulf, written sometime between the 8th and 11th century. When Sir Robert died, the library passed to his son, and then his grandson, Sir John Cotton. It was Sir John who decided the greatest private library should be turned over to the nation. This act, published in 1701, provided for the transition. That transition would occur the following year when Sir John died. Unfortunately, a significant part of the library was either damaged or destroyed in a fire in 1731 (Beowulf was singed), but the remainder then became one of the three founding collections of the British Museum and Library. Item 29. Priced at €450 (euros, or roughly $583 U.S. dollars).


Item 4 is the sale catalogue of another great collection, the Bibliotheca Askeviana, the library of Antony Askew. Askew was a physician now better known as being a bibliophile. He attempted to obtain a copy of every Greek classic, much of it coming in the form of manuscripts. After his death, Askew's collection was put up for sale. Buyers included the British Museum and the Kings of England and France. Had you the foresight to purchase a copy of this catalogue at the time of the sale in 1775, it would have cost a modest one shilling six pence, but you didn't and it is a bit more dear now. €1,050 (US $1,362).


Item 38 is a particularly large catalogue. It is Catalogus Librorum Qui in Bibliopolio Danielis Elsevirii Venales Extant. This is the catalogue of publisher/bookseller Daniel Elzevier, and it contains 20,000 listings. That includes all of the Elzevier titles then in print along with many others published in Holland. Who would have thought so many books were available in Amsterdam in 1674? It includes books on theology, law, medicine, and miscellaneous subjects, with other books available in French, Italian, Spanish, English, and German. Prices are not included, but presumably they were available “on request.” €15,000 (US $19,455).


Item 1 is a Price List and Specimen Book of Types, Comprising Chinese, Japanese, Manchu, English and Music. Evidently, music is a language! This rare specimen book was published by the American Presbyterian Mission in Shanghai in 1872. Knuf notes that the mission was originally set up in 1836, but conversions were slow, as they did not baptize their first convert until 25 years later. Come to think of it, the mission must not have ever been an overwhelming success since, as best I know it, most Chinese citizens aren't Presbyterians. Nonetheless, the mission press did lots of publishing in its day, in these and other languages. €5,000 (US $6,484).