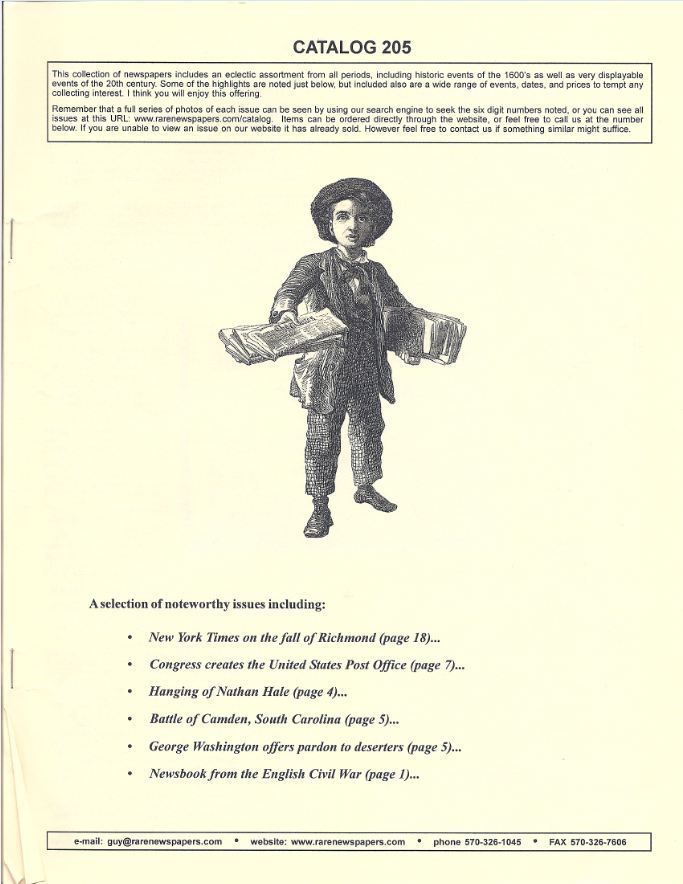 Extra! Read all about it!

Timothy Hughes Rare and Early Newspapers has just issued a new selection of old papers, Catalog 205. Covered are 344 years worth of news, as it appeared when it happened. Beginning with a “newsbook,” a precursor to the newspaper, it does not conclude until the Gulf War. The vast majority of the material comes from the 18th and 19th centuries, with breaking news about many of the events of the period. Wars are a major source of the news of these eras. For Americans, there is the Revolution, followed by the War of 1812, Mexican War and Civil War. Later papers cover the First and Second World Wars. However, there are many more events described, the forming of America's government, the issue of slavery and what to do about it, the assassination of Lincoln. There are scientific developments, inventions, crime and punishment, even Santa Claus (as illustrated by Thomas Nast). Most of the events covered precede the lifetimes of those living today, but among those some of our readers will recall include the dropping of the atomic bomb on Hiroshima, America's first man in space, the assassination of President Kennedy, the troubled Apollo 13 mission to the moon, and the resignation of President Nixon.

Among the advantages of collecting newspapers is that most are inexpensive, priced in two figures, occasionally three, not four, five and more. They provide not just news of a particular event, but of other things going on in the world at the time, and advertisements of the day, always nostalgic and entertaining. Occasionally, these early accounts of the news just got it wrong. For example, one proclaims John Adams the winner over Thomas Jefferson in the 1800 election, prescient of the famed “Dewey defeats Truman” headline. Several British newspapers bring reports of Gen. Burgoyne's success against the Americans, including his capture of Albany, a place he never reached. Here are a few of the events described in these early newspapers.


While many of the events described occurred in America, the newspapers describing them were often British. Some were sympathetic to the colonists, others cheerleaders for the home team. This November 20, 1776, issue of the Edinburgh Evening Courant is decidedly optimistic for the British cause. It speaks of victories in New Jersey. According to letters received from New York, Congress has begun to “lower their tone as even to talk of relinquishing their pretensions to independency. This sudden revolution in their ground plan is said to be owing partly to the repeated defeats of their army...” It reports that General Burgoyne has an army of 20,000 men plus Indian allies passing Lake Champlain on their way to New York, an attempt to divide the colonies that ultimately would fail. It also notes that “Yesterday we hanged an officer of the Provincials who came as a spy...” That letter is dated September 23, and the unnamed spy who was hanged the previous day was one of the most noted of American patriots, Nathan Hale. Item 596694. Priced at $535.


The unhappy (from a British perspective) conclusion to the Revolution would be marked in the January 1782 issue of the Gentleman's Magazine from London. It reports on Sir Henry Clinton's letter which begins “...I had the honour to acquaint your lordship with my fears respecting the fate of the army in Virginia. It now gives me the deepest concern to inform you that they were too well founded...” Some “honour” indeed! It even more poignantly quotes from Lord Cornwallis, “I have the mortification to inform your excellency that I have been forced to give up the posts of York and Gloucester and to surrender the troops under my command, by capitulation, on the 19th inst. as prisoners of war to the combined forces of America and France...” Item 595435. $330.


For most of us, Francis Scott Key's career begins and ends in 1814, with his writing of the Star Spangled Banner. However, Key had another 30 years remaining to his life, not all of it necessarily used in the most productive of manners. Key was a lawyer, and from 1833-1841, was a U.S. District Attorney in Washington. Among his uses of that office were a couple of notable cases prosecuting opponents of slavery. Key, long associated with the American Bible Society, was against slavery, but disliked abolitionists more than he disliked slavery. Key's solution to what to do with freed slaves was to get them out of here. He was a proponent of the ship them back to Africa movement. Item 595151 is an issue of the Dedham Gazette (Massachusetts) from July 18, 1817. It was a time when Key garnered little press, but he shows up here for speaking to a group in Baltimore that was interested in forming a society to promote the colonization of American blacks in Africa. They proposed Sherbro, a province of Sierra Leone. They article notes that Key arose and gave a speech that “enlightened” and “delineated the future grandeur & importance of the objects in view...” $43.


The Bellows Falls Intelligencer (Vermont) reported on some amazing discoveries on the moon on May 10, 1824. The use of a strong telescope revealed “a colossal building situated near the equator of the moon, resembling a fortress with strait ramparts, which are arranged like the lateral fibres of an alder leaf.” It also found roads, evidence of cultivation, “and several other indications of rational beings on the planet.” Item 595164. $39.


Item 595119 is a copy of the New York Times from June 4, 1878. Inside is a fascinating article headed An Evening with Edison. Two things were displayed at Irving Hall, a massive organ being shipped to Italy by the musical Roosevelt, organ-maker Hillborne Roosevelt, a cousin of the then unknown future president, Theodore Roosevelt. Thomas Edison then demonstrated his phonograph, recording various songs and speech and playing it back to the amazed audience. Cornet player Levy played some songs, which were then played back on the hand-cranked machine. The tuning was not good as the cranker could not turn the handle at an even pace, causing the songs to speed up and slow down and sound terribly out of key. However, Edison, who had developed a steady hand, later turned the crank evenly, resulting in a much more harmonious performance. Later phonographs would be wound up like a watch when cranked, thereby offering a steady performance. Edison and Roosevelt even performed a vocal duet, which was played back to the appreciative crowd. Edison told, and recorded, several stories as well. By the way, the original Irving Hall is long gone, but the site now houses Irving Plaza, a notable venue for music, which has featured performers like Bob Dylan and Eric Clapton, following in the footsteps of a singing Edison. $98.