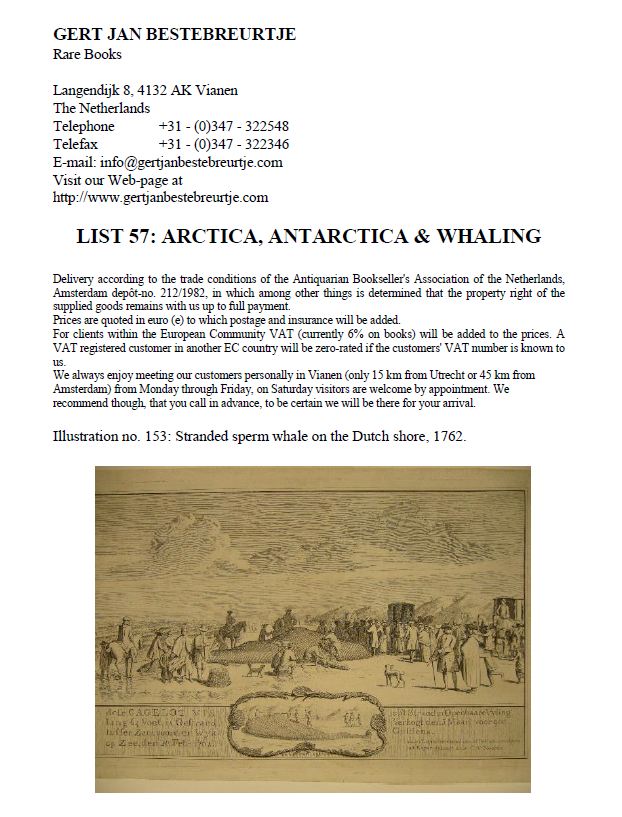 The Arctic, Antarctica, and whales.

Gert Jan Bestebreurtje Rare Books recently published their List 57: Arctica, Antartica & Whaling. This catalogue is filled with accounts of explorations to the farther reaches of the earth, north and south, where the sun either doesn't shine, or shines all of the time. Many relate to the elusive goals of finding a northwest or northeast passage. Others are accounts of attempts to reach the poles or other far northern or southern locations. Other items pertain to whaling, including several pictures of beached whales, apparently once a favorite topic of artists. So put on your sweater, coat, parka and boots and we will take a look inside of these pages.

Speaking of beached whales, the image on the cover of this catalogue is just such a whale, one of several such images in this selection. This is an engraving of a whale that beached itself on February 20, 1762 between Zandvoort and Wijk aan Zee in the Netherlands. As in all of these images, a crowd has gathered to gawk at the sight. The following day, Cornelis van Noorde drew this image. The whale was sold at auction two weeks later for 900 guilders. Item 153. Priced at €875 (euros, or approximately US $1,134).


Item 105 is a 1774 first edition of A Voyage towards the North Pole, by Constantine John Phipps (later Lord Mulgrave). Phipps was a navy man, but in 1773, instead of leading in battle, he led a pair of ships, the Racehorse and Carcass, on a journey to the north polar regions (who named that second ship?). Serving on the Carcass as a young midshipman was the man who would lead England in its glorious victory in the Battle of Trafalgar 30 years later – Horatio Nelson. The ships went around Spitsburgen and as far north as they could before being blocked by ice. The hope of finding a northern route to India was dashed, but they came back with much scientific information. They also came back with the first European description of the polar bear. €3,650 (US $4,732).


Here is a decidedly less serious journey north: Try Lapland. A fresh field for summer tourists. Lapland is a cold place. It comprises the northernmost areas of Sweden and Finland, extending north of the Arctic Circle. It's cold in winter and not warm in summer, but at least it is mild then. A great out of the way place for summer tourists. This book is an account of an 1869 journey (published in 1870) to Lapland by author Alex Hutchinson and his wife. Item 51. €65 (US $84).


Item 78 is an account of a visit to Spitsburgen, an island north of Scandinavia bordering the Arctic Ocean, in 1910. The flight was made in a zeppelin, and among the visitors was Ferdinand von Zeppelin himself. Graf (or Count) Zeppelin was 72 years old at the time. It was an early part of plans to explore the far north from the air via Zeppelin's famous airships. Adolf Miethe, who accompanied Zeppelin, and H. Hergesell were responsible for this 1911 account, Mit Zeppelin nach Spitzbergen. €95 (US $123).