Private Press Works and Much More from The Kelmscott Bookshop 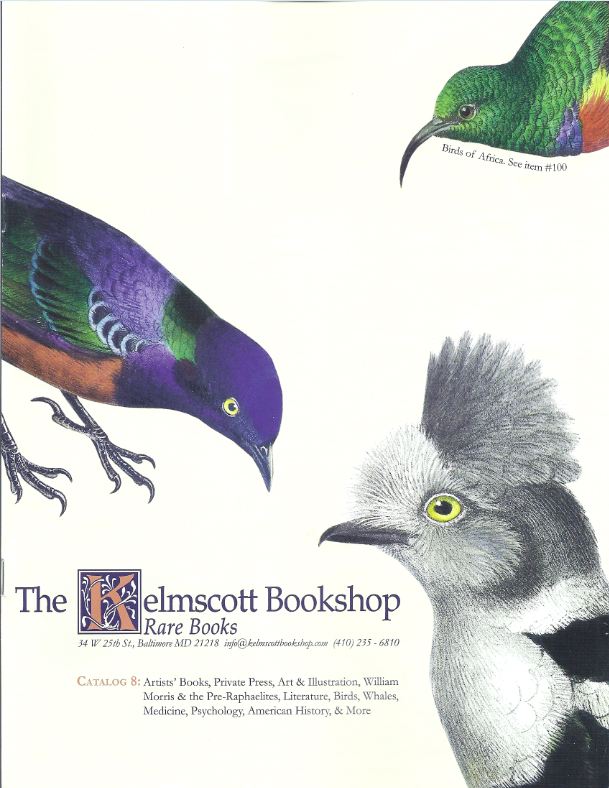 Catalog 8 from the Kelmscott Bookshop.

The Kelmscott Bookshop Rare Books has published their Catalog 8. Kelmscott focuses on the type of material created by their namesake, the Kelmscott Press. That was one of the earliest and most notable of the privates presses. So, we find much in the way of fine press work. However, there are also other types of material not always found in a Kelmscott catalogue, as the long title tells us: Artists' Books, Private Press, Art & Illustration, William Morris & the Pre-Raphaelites, Literature, Birds, Whales, Medicine, Psychology, American History, & More. All of those topics from “Birds” going forward are an expansion from the typical Kelmscott catalogue, so this one should interest a wider audience. Here are a few of the works to be found in this latest catalogue.

Here is one of those titles that fits somewhere between a collection of fine books and politics. The title is Chants for Socialists: The Day is Coming. No one will confuse this with a fine press creation. It is at best an ordinary printing. However, its author is the most notable of fine press operators, William Morris of the Kelmscott Press. This 1885 tract was published by The Socialist League Office, not Kelmscott, which was not founded until 1891. Morris was many things other than just a printer, including an artist and writer, but he was also an ardent socialist. This book attests to his deeply held political convictions. Unlike his Kelmscott books, which are almost always kept in nearly pristine condition, this pamphlet was meant to be read and its condition reflects its purpose. Item 53. Priced at $200.


Item 8 is an alphabet book. This is a fine press work from the Bay Park Press, which seems a contradiction. The last thing you want is children getting their hands on a fine press production. However, this book was hardly meant for the little ones. The title is O for Opera, and the small kids would love it, though they will never get to touch it. It has various pop-ups, movables, books within books, and other such fascinating devices. It was created by Sibyl Rubottom and Jim Machacek, and was years in the making. It is easy to see why with the intricate devices. All of this work, but only 45 copies were produced. Each of the letters describes something pertaining to the opera. The book was published in 2006. $2,500.


Alphabet books are, for whatever reason, fairly popular among private presses. Here is another. Item 12 is An Odd Bestiary, or a Compendium of Instructive and Entertaining Descriptions of Animals, Culled from Five Centuries of Travelers' Accounts, Natural Histories, Zoologies, &tc. This is an alphabet book of animals, beasts from around the world, some real, some mythical. The illustrations are accompanied by descriptions written long ago by those who encountered these strange animals. The book is the work of Alan James Robinson's Cheloniidae Press, with the illustrations also the handwork of Robinson. This copy is one of 50 of 300 that was bound in full leather. However, it is also a unique copy, as it includes 26 (of course) pencil drawings by Robinson. Published in 1982. $7,900.


This next title is appropriate to a collection of science books: One Hundred Books Famous in Science: Based on an Exhibition Held at the Grolier Club. This was from an exhibition held in New York in 1958, though this book was published in 1964. The book was the work of Harrison Horblit, who was a major collector in the sciences at the time. The copy is inscribed by Horblit to Mary and Don Hyde. They were also major collectors, and Don Hyde was President of the Grolier Club. Mary, however, wasn't even a member. No women were allowed back then. Kelmscott notes that “this book is still considered something of a bible in the field.” Item 58. $875.