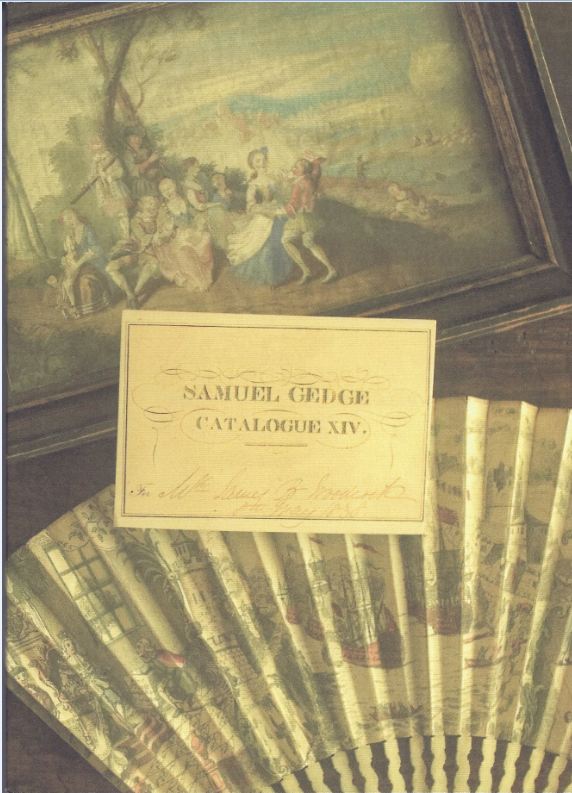 Samuel Gedge Ltd. Rare Books of Norwich, UK has issued their Catalogue XIV. Gedge offers a variety of antiquarian material, primarily English, with a concentration in the 18th century. Along with books there are manuscript letters and other documents, and various ephemeral items. There are no photographs, but that is because Gedge's material is too old for this type of representation. Drawings and paintings to capture the times, however, are to be found. These are a few of the items we found in this latest selection from Samuel Gedge.

Item 7 is a trade card for a very strange device, by today's standards anyway, though quite popular at the time (circa 1765). It is headed, At Margate in the Isle of Thanet, in Kent, is erected by Thomas Surflen, opposite the White Heart, a very commodious bathing machine... The bathing machine was not something in which to take a bath. It was a contraption designed to provide privacy in an era where men and women were not supposed to see each other on the beach. It was a modesty thing. This wheeled carriage, with a folding tent-like extension and barriers, was a place either a man or woman could change into appropriate bathing attire. It was wheeled down to the water's edge. The customer could then step out of it and into the water, the machine blocking the view of others on the beach. Sure sounds like this would take much of the fun out of swimming, but, hey, this was the 18th century. A horse was hooked up to the front to pull the device up through the sand when the swimmer was finished. Mr. Surflen notes that he is available to help gentlemen customers, while his daughter is present to assist the ladies. Priced at £650 (British pounds, or approximately $1,033 in U.S. currency).


In today's modern world, people insult each other by posting messages on some website or other, usually anonymously. This was not possible a couple of centuries ago, but evidently the need to insult was just as great. Instead, they would publish pamphlets insulting each other, and not necessarily anonymously. The “insultee” would then have to defend himself in a responding pamphlet. Pamphlet wars could go on for years. Item 71 is a letter and a responsive pamphlet from one Felice Mariottini, a learned man who had trouble finding a suitable position in Italy. Eventually he moved to London to become an instructor in the Italian language. There he discovered that Madame de Genlis, whose children he had tutored, had attacked him in her memoirs, claiming he had made repeated passes at her. In this letter (written in Italian) Mariottini defends himself. A copy of his pamphlet, Public testimonies, to oppose private misrepresentations concerning Mr. Mariottini's character and abilities, whatever they may be (1796), was included with the letter when originally sent, and is included here. £850 (US $1,351).