48 Varied Items from The Pages of Yesteryear 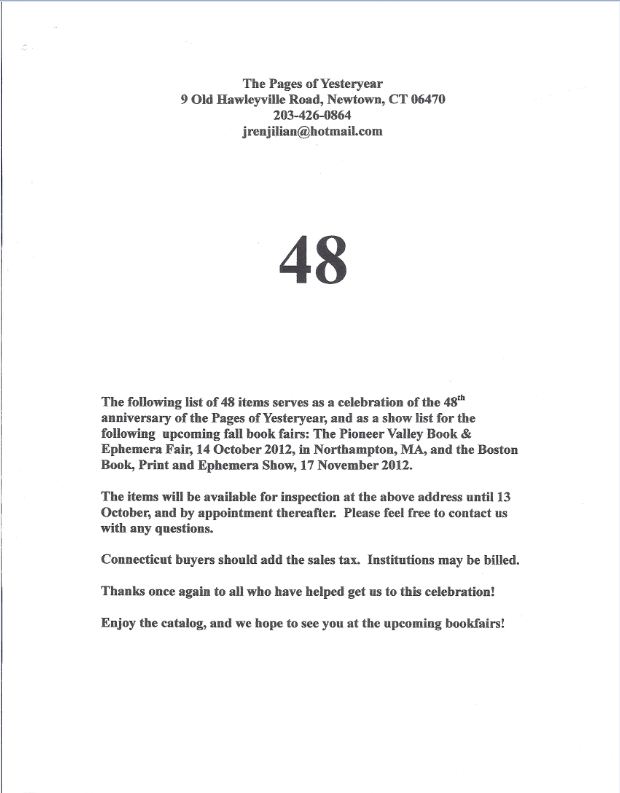 The Pages of Yesteryear issued a catalogue a little while back with the succinct title 48. It was named, not sequentially for catalogues, but for years in business. This represents their 48th year in business, almost as old as books themselves. The items offered are an unusual mix. There are books and various ephemeral items – letters, broadsides, account books, typescripts and such. These provide a glimpse at life a century or two ago. Times have changed. Let's take a look.

Item 2 is a testament to amazing technological advances at another time of rapid technical change, the turn of the 20th (rather than 21st) century. It is a Souvenir Program of the International Aviation Tournament Belmont Park, Oct. 22-30, 1910. Most people associate New York's Belmont Park with horse racing, but for a few years, that was banned. Instead, for a few days in October, it featured airplane races. Obviously not around the track, but a race went from Belmont around the Statue of Liberty and back. The winning time was 35 minutes. Another race was won by accomplishing an average speed of 61 miles per hour. A record altitude of 9,714 feet was achieved. The program lists the events and competitors and includes several photographs. Among those who participated were Wilbur and Orville Wright. That brings us to what is so amazing about this meet. It took place just seven years after the Wright Brothers' first air flight, a 12-second journey of 120 feet at a speed of 6.8 mph and an altitude of 10 feet. Progress can be astonishing. Priced at $250.


Here is a letter the Wright Brothers might have appreciated. It is a four-page letter from a boy named “Nattie” to his “Dear Papa,” dated March 10, 1878, from Boston. In it, he talks about bicycles. Bicycle manufacturing was the Wright Brothers profession before they moved to aviation. Nattie was impressed by some men riding their “bicicles,” noting, “There is a rubber band goes around the outside of both wheels (rubber tires?)...they don't make a bit of noise...they have a little brake...and the man who rides on it can stop it just as quick as you can wink.” He notes the cost ranges from $80-$150. Item 4. $150.


Dentistry is not a particularly pleasant subject today, but at least it isn't the horror it was in 1875, the time of this dentist's account book. No high speed drills, novocaine, or much else to relieve the horror of a visit. At least Horace Mason Perkins appears to have had a bit of a sense of humor, though perhaps unintentionally, as he described his customers' creditworthiness. Perkins attended the Harvard Dental School in 1898 and received a DDS in 1908 from Tufts, which may make you wonder why he was practicing dentistry in 1875. He also received degrees from the Philadelphia Dental College in 1869 and Boston Dental College in 1870. I have no idea whether he was a good dentist, but at least he was a well-educated one. Among his comments on various customers' credit, he writes such things as “good as gold,” “[pays] cash – nice old lady,” “never known to pay bill,” “Good but doesn't come on time.” For one family he writes, “Look out for the Fox family - no good – especially G P Fox who is a loafer.” As for the “Portuguese from Cohasset,” they are hard to please and will beat you down, but if you stick to your price, they will give it to you. His pricing includes 50 cents for an extraction, but $1 if you want gas or to have it done in your home, $1 for a silver filling but $2-$3 for gold, 50 cents for killing a nerve, and $20 for a full lower plate. Item 14. $250.


Item 38 is a scathing attack on the Union Pacific Railroad from 1869, the year the transcontinental railroad was completed. The author is Chauncey H. Snow, government director for the Union Pacific under President Andrew Johnson. This report is titled Preliminary Report to the President of the United States on the Location, Construction, and Management of the Union Pacific Railroad. He criticizes the “grading, bridges, curves, location, corruption in management and in Congress, and pretty much everything connected to the Union Pacific in his 17 pages,” Pages of Yesteryear tells us. He also mentions Credit Mobilier, the company involved in a major scandal in the just beginning Grant administration. Snow concludes that he knows his report will “bring upon me enmity of persons in high official positions – of persons controlling unlimited capital...but I must do my duty.” A selfless public servant was Mr. Snow. The pamphlet is dated March 10, 1869, but that has been corrected in pencil to read March 5. That is correct, as the report was handed in to President Grant, who took office the previous day, on March 5. The following day, Grant replaced him. However, before getting too sympathetic for the idealistic Mr. Snow, or assuming this is evidence of early corruption in the Grant administration, according to the book Union Pacific by Maury Klein from 1987, Snow produced two reports on the Union Pacific, one favorable, one unfavorable. He was willing to submit the favorable one for the right compensation. When he did not receive it, he submitted the bad one. At various times, Snow reportedly sought cash or a coal supply contract from the railroad, threatening to provide harmful information if he was not paid off. $125.


Tornadoes are nothing new to the Midwest. Last year, we saw the terrible destructive force in Joplin, Missouri, and before that, in Tuscaloosa, Alabama. Here is a photo account of a similarly terrible storm a century ago: Omaha Cyclone in Pictures, Easter Sunday, March 23, 1913. It was not a happy Easter in Omaha that year. A line of intense storms spawned a series of tornadoes. A very bad one made its way into Omaha. The tornado was not only powerful, but wide, increasing the damage. Houses, including wooden ones from poorer neighborhoods and brick ones from wealthier ones, were destroyed. One hundred fifty people were killed, another 400 injured. This booklet contains 30 pages of pictures, one of text, and one of advertising. Item 32. $75.