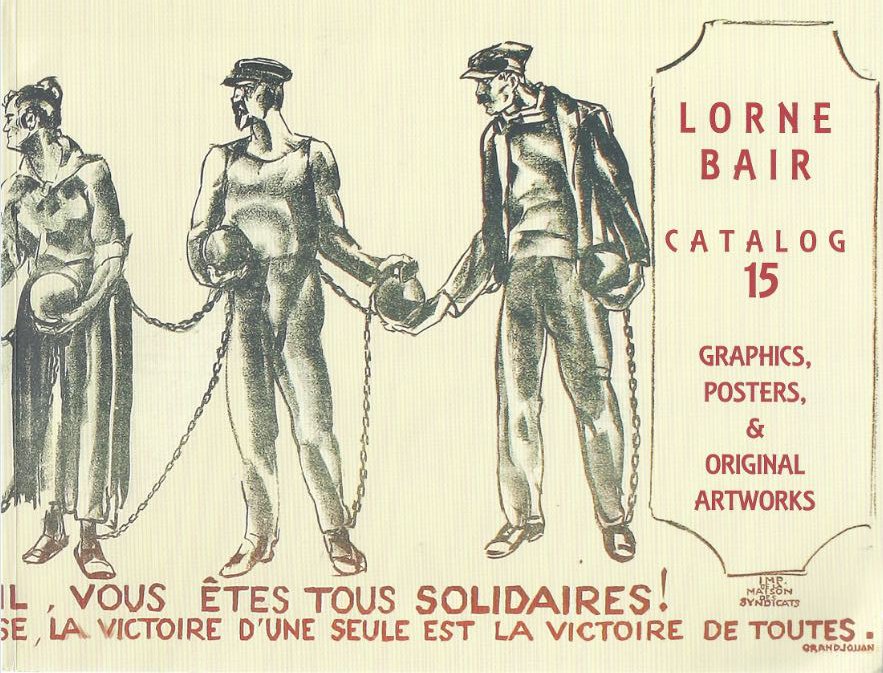 Lorne Bair Rare Books has issued their latest – Catalog 15. Graphics, Posters, & Original Artworks. Bair's material relates primarily to social and political movements of the late 19th through the 20th century. There is little that comes from what Americans would think of as the mainstream. Most would be considered the far left today - Communists, radical unions, liberation movements. They may not have seemed so far out at the time. Workers had few protections in the early 20th century, leading to reactions that might seem extreme today. Many people turned to Communists in the Depression, but conditions were so bad then that it is not surprising so many thought their economic system had collapsed. While these radical leftists may never have accomplished their stated goals for transforming society, much of the protections workers and ordinary citizens achieved over the years came in response to the even greater demands of the radical movements of the day.

The catalogue is arranged chronoligically, and starts with a cartoon mocking the end of radical Reconstruction in the South. We then move to labor movements, peace drives during the time of the Great War, leftist radical movements in Germany in the 20s, the Spanish Civil War, the Second World War, the Civil Rights movement and the more radical causes that succeeded it, the Cultural Revolution in China, and more recent events from Latin America and the Gay Rights movement.


That is not to say everything in this catalogue comes from the left. There are also items that promote the far right. Not as many, mind you, but a few. Also, unlike most Bair catalogues that are heavily weighted to America, there are many European and Asian items to be found. Political extremes have been even more common in Europe and Asia, and the consequences have often been tragic. Why can't we all just get along? We can't, so here are some samples from these years of conflicts.


Item 6 is titled The Dollar or the Man? The Issue of To Day. It is an album of political cartoons from the pen of Homer Davenport. Davenport was a satirical cartoonist at the dawn of the 20th century (this work was published in 1900). His attacks on political bosses grabbed the attention of William Randolph Hearst of all people, not exactly known for radical politics. Nonetheless, Hearst hired Davenport to draw cartoons for his New York Evening Journal in 1895. Davenport took on the bosses of the day, at one point so enraging Republican boss and Senator Thomas Platt that he attempted (unsuccessfully) to get the New York Legislature to pass a law banning political cartoons. Davenport regularly skewered President McKinley, but was approving of the candidacy of the Progressive Republican Theodore Roosevelt. Davenport ended up being, in a manner of speaking, the last casualty of the Titanic. He was assigned to draw the sinking of the famous ocean liner, and went to the docks to meet the survivors. He caught pneumonia in the cold, damp air and died a few days later. Priced at $350.


Item 12 consists of four posters from the other side of the spectrum. They were created by the National Association of Manufacturers, a very conservative business organization, for posting in the workplace. They are ostensibly very patriotic messages for wartime, the year being 1918. The messages are, basically, work hard and don't complain because this helps the war effort. A cigar-smoking “Agitator” on one poster sews “Strife” and “Disloyal Propaganda.” Bair notes that the caricature looks remarkably like labor organizer Big Bill Haywood. The NAM may have been motivated more by having a low-paid docile labor force than by the war effort. $850.


Item 25 is a poster for a German Communist Party sponsored anti-war rally circa 1924. The artist is unidentified, but looking through a strong light, you can decipher the editorial imprint of Hugo Eberlein, the party's minister of propaganda. Eberlein's name was blocked out in blue ink, and there is a likely explanation for this. Eberlein was an active communist in Germany, but after Hitler came to power, he was forced to flee to the Soviet Union. This might sound like a safe place for a communist, but not in the era of Stalin's purges. Evidently, his factional connections concerned Stalin, so in 1938, Eberlein was exposed to ten days of brutal torture, put in a show trial, convicted and sent to prison for 15 years. Not even this was sufficiently secure, so in 1941, he was brought back to Moscow, tried again, sentenced to death and shot. Any references to Eberlein, who would have become a “non-person” after that, would have been blotted out by the Soviets, the likely explanation for the ink over his name on this poster. Being a good communist was not always enough, though Eberlein was later “rehabilitated” in East Germany. $500.