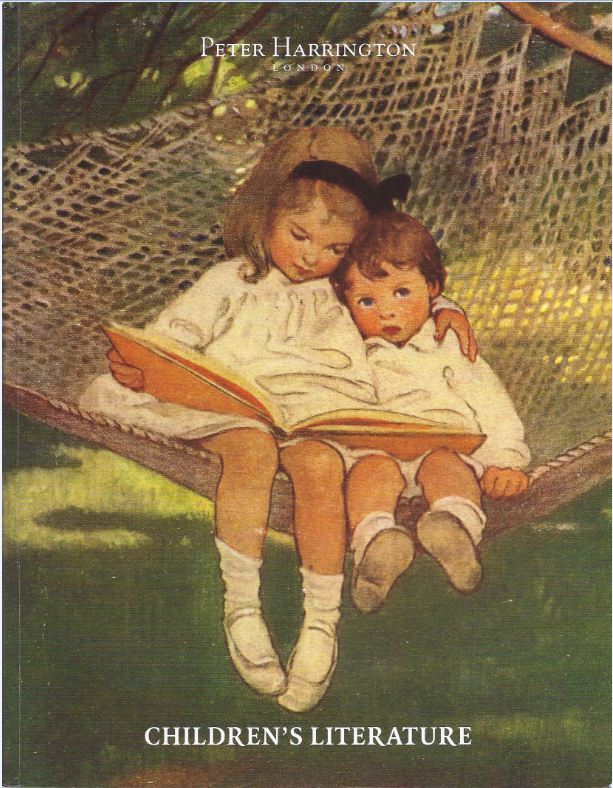 Peter Harrington of London has created a fine catalogue of Children's Literature. It is filled with the work of the most beloved of children's authors. They are all here – Beatrix Potter, Dr. Seuss, Robert Louis Stevenson, A.A. Milne, Lewis Carroll, Mark Twain, Joel Chandler Harris, J.K. Rowling, L. Frank Baum, J.R.R. Tolkien, Kay Thompson, Maurice Sendak, and many more. If you are looking for the real classics of children's literature, this is a catalogue for you. Here are a few examples.

Since we are now in the season, what better place to start than Charles Dickens' A Christmas Carol? There probably isn't anyone who doesn't know the story of the miserly Scrooge and the lesson he learned one Christmas Day a long time ago. It is a moral worth repeating year after year, as surely as this story is repeatedly told year after year. Item 43 is a first edition, first issue, published in 1843. Priced at £12,500 (British pounds, or about US $19,975).


Here is another story with a moral, but one with political implications, and an ending unrealistically optimistic. The book is Fatapoufs and Thinifers, the 1940 first English language edition of a book by French Writer Andre Maurois, originally published in 1930. It tells of an underground world containing two states, one of the fun-loving, laid back, gluttonous Fatapoufs, the other of the hard driving, hard working Thinifers. In time they go to war, and as might be expected, the hard driving Thinifers are victorious. However, they find out that they really like the Fatapoufs after all, and peace is restored. Many people saw the Fatapoufs as symbolic of the French, the Thinifers of the Germans. Of course, those two did go to war, Germany quickly conquered France, and peace and independence was later restored to France, though not as a result of the Germans suddenly concluding that they liked the French. It took massive allied force to restore freedom to France. Item 112. £600 (US $959).


A century has gone by, yet this tale remains a favorite of children. It is The Tale of Peter Rabbit, that naughty bunny, his patient but firm mother, and the poor overwrought Mr. McGregor, who just wanted to be able to tend his garden without some thief stealing the fruits (or vegetables) of his labor. Beatrix Potter originally wrote about Peter in a letter to an ill child, then forgot about it. However, years later, she thought it might make a good story for a small book, and fortunately the child still had the letter. It became the basis for this book. Potter could not find a publisher, so she ended up publishing it herself. This copy is from that privately printed first edition, the second issue from February 1902. It would soon find its way to a regular publisher and then new copies of this tale would start multiplying like rabbits. Item 134. £17,500 (US $27,970).


Here is another one of those most popular of children's books ever published. This one, instead of being an animal tale, is that of a little boy and his stuffed animals, though these were quite a lively bunch for toys. Item 114 is When We Were Very Young, the first of A.A. Milne's Pooh books. This is one of a limited number (100) of the deluxe edition. It is signed by Milne and his illustrator, Ernest H. Shepard. £17,500 ($27,970).


Here is an author we don't often think of as a writer of children's books. The Godfather? Item 152 is a copy of The Runaway Summer of Davie Shaw. The protagonist, young Davie Shaw, has a summer full of adventures in this 1966 book. Mario Puzo's children's book was published three years before he made his way into the national consciousness with his story of the Godfather. Interestingly, this children's book has an inscription from Puzo much more appropriate for the Godfather tales that he had not yet written. Writes Puzo, “For Carol. If you don't like I'll kill you. Mario.” £375 (US $599).