The First Catalogue from Honey and Wax Booksellers 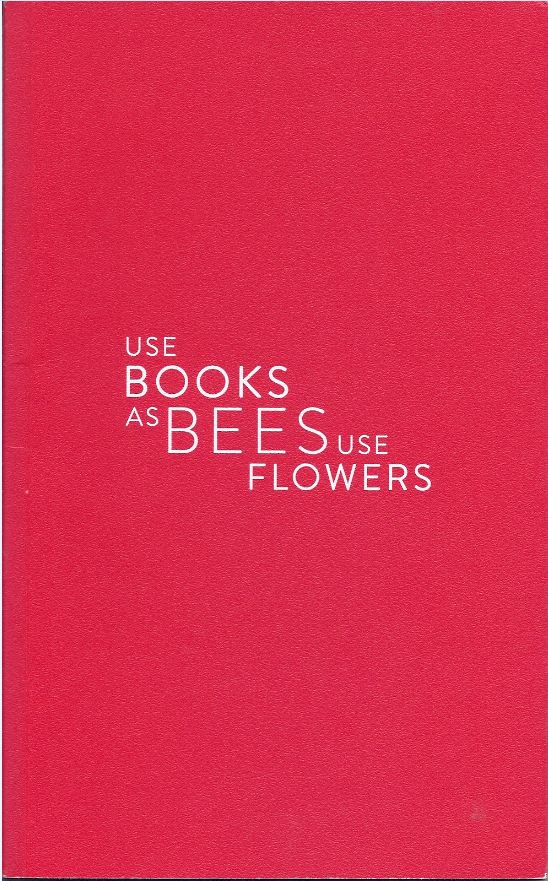 The first catalogue from Honey & Wax.

This month we received our first catalogue from Honey & Wax Booksellers of Brooklyn, New York. It is an unusual catalogue, with fold-out covers and wording on the cover I can't quite figure out whether it is the title or company motto. Either way, here it is: Use Books as Bees Use Flowers. Hm...let's see.. ah ha – they devour the nectar! That's my interpretation. Could be wrong. Honey and Wax is a fairly new book firm, but is operated by Heather O'Donnell, who brings years of experience in the trade. This is their first catalogue, but we hope to see many more. Traditional printed catalogues remain an important part of bookselling, even if this one is a bit untraditional in appearance.

In the introduction, headed “This is a story about the way we read now,” Ms. O'Donnell notes that paper books “are no longer our primary means of conveying information, and probably never will be again.” True enough, but how then do we preserve our heritage? That is a question future generations will have to answer as they delete old books from their electronic readers. Fortunately, we still have over five centuries worth of printed books to hold, cherish, and pass down to future generations. As she further observes, “They [books] satisfy our desire to own and handle well-made objects, to live among them, to give each other something lasting, rather than simply clicking 'share.'”


Honey & Wax booksellers specializes in literature, “with the occasional foray into the arts, specializing in unique copies: books from the libraries of writers and artists, rare first printings, quirky vintage editions, splendidly bound copies, books with no downloadable equivalent.” Here are a few from this first Honey & Wax catalogue.


We will start with what could fairly be called the first piece of English literature, as printed by the greatest of the fine private presses. This is the Tale of Beowulf, author unknown, perhaps dating to as early as the 8th century. It survived in a single manuscript, but did not make it to the press until the early 19th century. This copy is from the limited edition of 308 copies off William Morris' Kelmscott Press, hence its familiar name as the Kelmscott Beowulf. This work was a “labor of love” for Morris. The work was translated to prose by A.J. Wyatt, and then Morris returned the translated text to poetry, as was the original. Morris said of Beowulf, it was “the first and the best poem of the English race, [with] no author but the people.” He also claimed it was one of his most expensive productions and he lost money on the project. If he could have waited another 117 years (it was published in 1895), Morris would have done just fine. This copy includes the “Note to Reader” that was tipped in to it. Item 55. Priced at $8,200.


It is not unusual to see poets come off the mean streets, or the bohemian neighborhoods of cities. Rarely do they come from the executive offices of insurance companies. What rhymes with “amortization?” Wallace Stevens began working at the Hartford Accident and Indemnity Company in 1916, seven years before his first book of poetry was published, and would continue to do so for the remainder of his life, rising to Vice-President. On the side, he wrote poetry, and that is what he is remembered for today, not writing insurance policies. His reputation, though modest at first, grew with time, and he received a Pulitzer Prize in 1955, the year he died, for a collection of poetry. Item 36 is a first edition, first issue, first binding of Stevens' first book, Harmonium, published in 1923. The full-time insurance man was already 44 years old by then. This copy contains the bookplate of Annie Eliot Trumbull. Ms. Trumbull was a writer and Connecticut neighbor of Stevens who introduced him to the literary circles of the area in the days before he was a published writer. $6,200.


Items 73-80 are eight separate broadside promotions for Shakespearean plays in London, New York, and Philadelphia. They date from 1810-1857. Many featured the most notable actors and actresses of their day. The actress Mrs. Jordan makes her appearance on a broadside as well as on stage. Along with being a notable actress, she was even better known as the longtime mistress of the future King William IV. William was not expected to ever be King when he and Mrs. Jordan were together, so he was free to carry on his affairs as he pleased. Carry on his affairs he did, William and Mrs. Jordan having ten children together between 1794 and 1807. They broke up in 1811, and William became King in 1830. When William died in 1837, the crown passed to his niece, Victoria, since, ironically, he had no children (“legitimate” ones, that is). Another broadside features the greatest American Shakespearean actor of the mid-19th century, Edwin Forrest. The rivalry between Forrest and his working class and immigrant fans, against British Shakespearean actor William Macready and his upper class fans, led to the terrible Astor Place Riot of 1849. Followers of each fought each other outside the Astor Opera House, 20-30 people dying in the ensuing melee. Shakespeare would have been... dumbfounded? These 8 broadsides are priced from $500-$850 each.