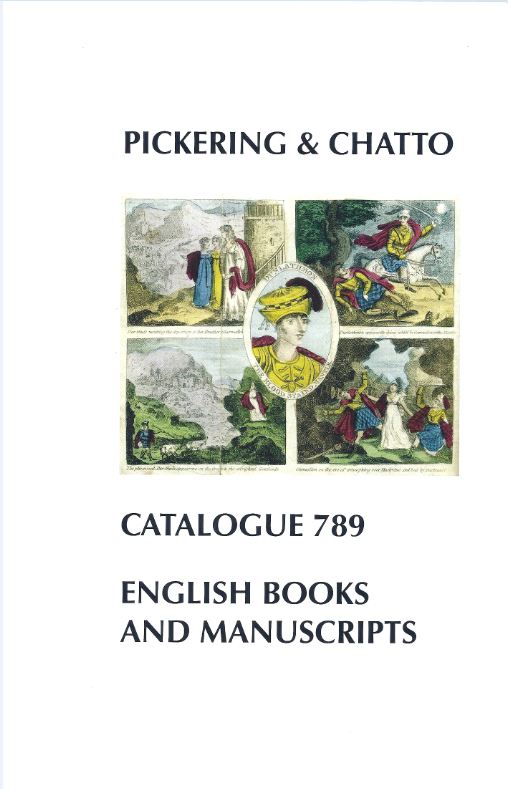 This month we review our first catalogue from Pickering & Chatto of London, England. It is not their first. Actually, it is Catalogue 789. That large number is probably best explained by their age, as they have been selling books since 1820. It is always nice to find someone older than myself. This most recent catalogue is titled English Books and Manuscripts. That could mean either of two things, these are books published in England, or books written in the English language. It turns out that, for the most part, both apply. With the exception of a small number of items published in America, these books and smaller form printed and manuscript items came off an English press or pen. As for the English language option, all of the material is in that language. So, these are definitely English books and manuscripts. Here are a few of them.

We start with an honest obituary, which is not necessarily a good thing for this man: The Life, Reign, Death, and Funeral, of His Most Gracious Majesty, King Geo IV. George IV succeeded his father, the George Americans loved to hate during the Revolution, in 1820, though he had effectively served that role for the preceding decade as Prince Regent. George III went insane. George IV served a decade as King until his death in 1830. Few mourned all that deeply. He had lived a lavish lifestyle, often beyond his means, and to his father's exasperation, while the latter still had his marbles. He had an unhappy marriage to his Queen, almost all of it spent apart, and she was forbidden to attend his coronation. He did have mistresses, and a personality that did not always engender admiration. In his kingly years, his health deteriorated while his body size grew, and he spent much of the time suffering various illnesses. This obituary is unrecorded, and Pickering & Chatto believes that it was likely suppressed for its honesty. It speaks of his younger days in “dissipated” and “immoral” circles, his illegal marriage to Maria Fitzherbert, his extravagant lifestyle and his debts. Item 55. Priced at £500 (British pounds, or about $801 in U.S. currency).


Not everyone was living a life of profligate luxury at the turn of the 19th century like the future George IV. Item 39 is The Covenant of an Indenture of Apprenticeship, printed in 1798. It spells out the duties of an apprentice. He was bound to serve his master for seven years. Among the requirements was no dealing on his own behalf, no marriage or fornication, no card playing, dice or other unlawful games, nor haunting taverns or playhouses. Otherwise, they were free to live it up. Item 39. £500 (US $801).


The opponents of women's rights aren't always men. Item 123 is Mixed Herbs: A working woman's remonstrance against the suffrage agitation: by M.E.S. That would be Maud Ellen Simkins, and she explains she isn't one of those women who opposes suffrage “as unwomanly through some finikin conception of a woman's place in life as sheltered and luxurious.” No, Maud tells us she is “a working woman,” whatever that may mean. After apologizing that - “I am no novelist: the disclaimer is doubtless superfluous in view of the simplicity, the clumsiness of my attempt at narrative,” she says that women need help. Perhaps she drew too much on her own personal situation. Published in 1908. £250 (US $400).


Speaking of working women, Item 145 is a collection of a dozen bulletins from the Women's Bureau of the U.S. Department of Labor, dated from 1920 through 1960. We will not comment further on The Employment of Women at Night. However, there are other favorites such as The Employment of Women in Slaughtering and Meat Packing, and The Effects on Women of Changing Conditions in the Cigar and Cigarette Industries. £285 (US $456).