Books in English 1527-1728 from James and Devon Gray Booksellers 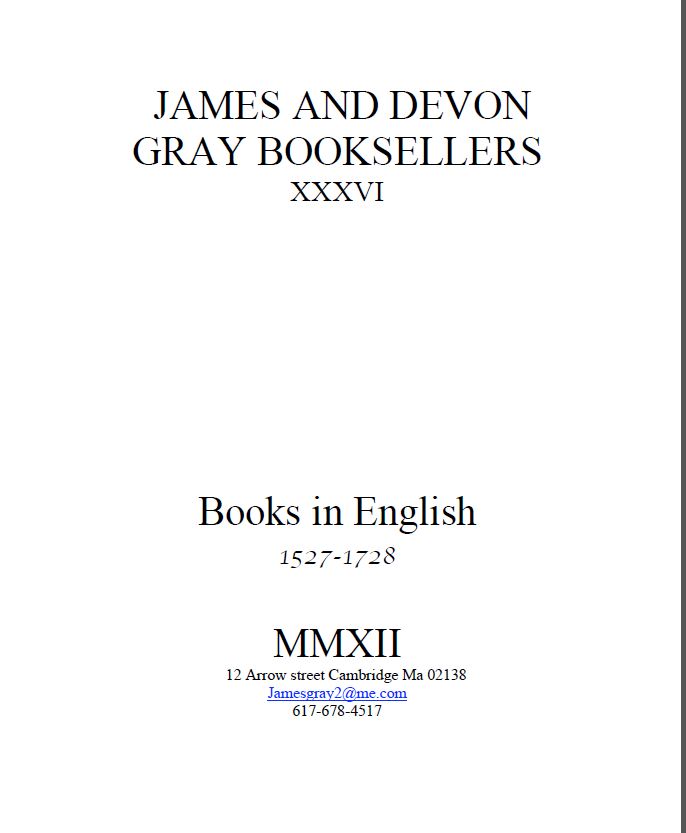 This month we review our first catalogue from James and Devon Gray Booksellers from Harvard Square, in Cambridge, Massachusetts. They specialize in seriously antiquarian books, that is, from 1700 going backwards. However, as the title of this catalogue attests, they do add in a few more “modern” texts: Books in English 1527-1728. The spellings can be a bit odd, and the wording somewhat awkward at times, but these are books English-speakers can read, unlike the majority of books dating back so far. Theological topics are often the item of the day in such early works, though science, medicine, philosophy, mathematics, and other subjects make their share of appearances. This being 16th through early 18th century England, the theological work often takes a decidedly anti-Catholic bent. Henry's problem with his marriages left its mark. Here, now, are a few of these very old works in the English language.

What were the big sports and recreations back around 1700? Perhaps the title of this book, a third edition from 1701, will shed some light: The School Of Recreation: Or A Guide To The Most Ingenious Exercises Of Hunting, Riding, Racing, Fireworks, Military Discipline, The Science Of Defence, Hawking, Tennis, Bowling, Singing, Cock-fighting, Fowling, Angling. Interestingly, while various team sports not in existence then may have the greatest following today, most of these are still very popular. Perhaps military discipline is no longer considered a lot of fun, and cock fighting has been outlawed in most places, but the others live on. The Grays note that it is interesting that people even had leisure time then, though we assume these sports were mostly enjoyed by those of more than modest means. Perhaps the reason for cock fighting no longer being considered acceptable has to do with author Robert Howlett's advice on caring for the bird, which includes “licking his head and eyes with your tongue, and then feeding him hot urine.” I guess that would make anyone fighting mad. Item 895F. Priced at $4,000.


Item 946F comes from the middle of the line of notable Massachusetts clergymen, the Mathers. This one is Increase Mather, not exactly a liberal theologian, even by Puritan standards, and not an entirely reluctant participant in the Salem Witch Trials. This item, A letter from some aged nonconforming ministers, to their Christian friends, touching the reasons of their practice. August 24. 1701, finds a more tolerant Mather. He writes “Christians should give a reason of their persuasion in matters of Religion. Why should not Dissenters be allowed that liberty?” Indeed, why not? $4,500.


As noted above, English views toward the Catholic Church were not very positive in the 16th-18th century. Item 394F gives that view away in its title: Abjuration of Poperie, By Thomas Abernethie: Sometime Jesuite, but now penitent Sinner... Abernethie claims that while in Germany, he became the “prey” of a Jesuit, who seduced him with his “alluring delusions.” “I have sinned using too much diligence in drinking the cup of their pestiferous doctrine,” he exclaims. Abernethie continues that he “studied three yeeres to their deceitfull philosophie, foure years to their sophisticall divinitie, and two yeeres to their hypocriticall superstition, or superstitious hypocrisie, in their Novitiate at Rome.” This kind of talk would undoubtedly have endeared him to a wide audience in England at the time of its publication, 1638. $1,100.


An even more rabid anti-Catholic was William Waller (not to be confused with his father, the English Civil War general of the same name). Waller was intimately involved in the “Popish Plot,” the burning of Catholic books, and numerous other attacks on Catholics. He fled to Holland in 1680, where he wrote this strange pamphlet, The tragical history of Jetzer, Or, a faithful narrative of the feigned visions, counterfeit revelations, and false miracles of the Dominican fathers of the covent of Berne in Switzerland, to propagate their superstitions. For which horrid impieties, the prior, sub-prior lecturer, and receiver of the said covent were burnt at a stake, anno Dom. 1509. According to this bizarre and unbelievable tale, Jetzer, a dimwitted Dominican, was made to believe he had seen an apparition of the Virgin Mary by the friars through some sort of floating mannequins on strings, who made proclamations Jetzer would then attest to hearing. This is all very complicated, but ultimately the Dominicans were caught and burned at the stake, all proving the perfidy of the Catholic Church. Item 195g. $950.