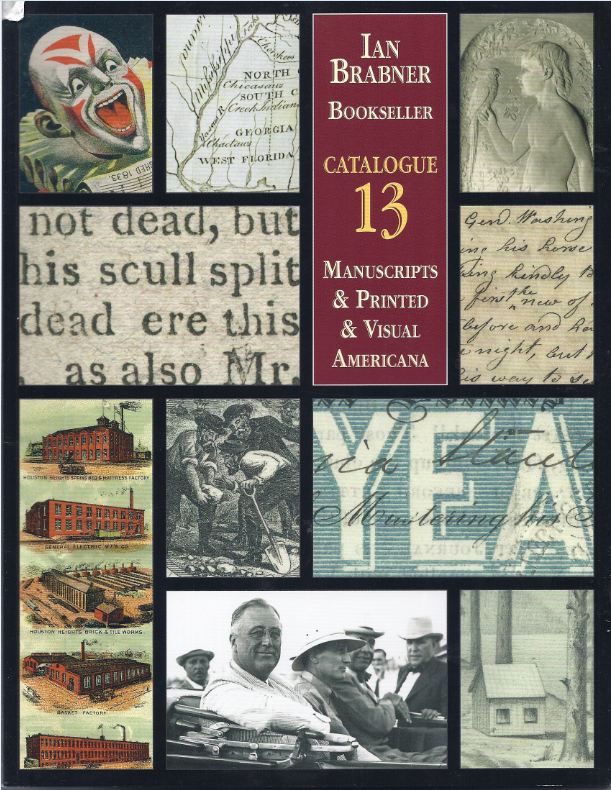 Ian Brabner, Bookseller, of Wilmington, Delaware, has published Catalogue 13, Manuscripts & Printed & Visual Americana. There is quite a variety of material here, from books, broadsides, and other printed documents, to manuscript letters and personal accounts of important events, to photographs, advertising material, cartoons, business cards, unpublished typescripts, and even more ephemeral items such as document pouches. This is a fascinating mix of material and anyone who collects Americana will much enjoy this catalogue. These are a few of the items that are being offered.

Would you like to purchase Lincoln's log cabin? You could have, once upon a time, and it wasn't all that expensive. Item 34 is a 1905 broadside announcing, Commissioner's SALE! Of the Abraham Lincoln Birthplace. The 110.5 acre farm near Hodgenville, Kentucky, was being sold on August 28, 1905, to satisfy a bankruptcy debt. The winning bid was $3,600, placed by Richard Collier of Collier's Weekly. He founded the Lincoln Farm Association to preserve the home and property, which is now managed by the National Park Service. Priced at $650.


Preserving Lincoln's cabin brought donations from all over the country to Collier's Lincoln Farm Association. Here is another American monument that brought in much support from America, and France too. Item 13 is a certificate for the Subscription for the Building of a Commemorative Monument of the Centennial Anniversary of United States Independance [sic] Erected in Remembrance of the Ancient Friendship of France and America. That monument was to be called Liberty Enlightening the World, though we know it now simply as the Statue of Liberty. France was paying for the statue, but Americans needed to contribute to build the base on which it stands. The 1875 certificate features an image of how the completed statue would look in New York harbor, along with images of Washington, Lafayette, and Rochambeau. America and France have had their differences at times, but as the certificate notes, with this gift to America, “...we consolidated by an eternal remembrance, the friendship which has been sealed by the blood of both people's forefathers.” $6,500.


Item 86 is a group of advertising leaflets and other material pertaining to the Fairy Sisters. The Fairy Sisters were Catherine (“Cassie”) and Victoria Foster, then about the ages of 8 and 2. They played music, but it wasn't their musical talents that brought the crowds to see them. It was their size. They were very small, “midgets” in the vernacular of the day, or “Lilliputian” as one of the circulars describes them. For 25 cents, you could gawk. Their parents discovered the girls were a good source of income, and put them on tour in 1872-1873. However, their health was not good, and Cassie died at age 10, Victoria at 3. Don't feel too badly for their parents losing out on their livelihood. In 1877, they had a similarly small boy, who would go on display during the next decade, and lived to be 17. $350.


Item 12 is the handwritten personal Revolutionary War journal of Elijah Porter. Porter served in General Israel Putnam's Connecticut division under George Washington. He served from May 1777 through May 1780 and witnessed many important events of the revolution. Early on, he writes of having to help hold down a British officer about to be shot for spying. At the last second, he had to jump out of the way. Porter writes movingly of General Washington walking through deep snows during the harsh winter of 1779-80 in Morristown, New Jersey, expressing his deep concern to each soldier over the terrible conditions they had to endure, and working hard to find additional food for them. Numerous notable personalities from the war make their way into Porter's pages, including General Anthony Wayne, “Barren Stuben (Baron von Steuben) the Old Prussian Drummer,” and the “Hored Trayter Arnold.” The account is dated 1841 and comes from Farmington, Connecticut. While we cannot be positive, it seems highly likely that this is the Elijah Porter who served as a Deacon in the local Congregational Church and was the first librarian in Farmington. He had created some notes about his experiences in the war that were read at the library in the late 19th century (perhaps these?), and he died in 1845 at the age of 84, correct timing for this account and for having served in the Revolution. $42,500.