More from the American West from Old West Books 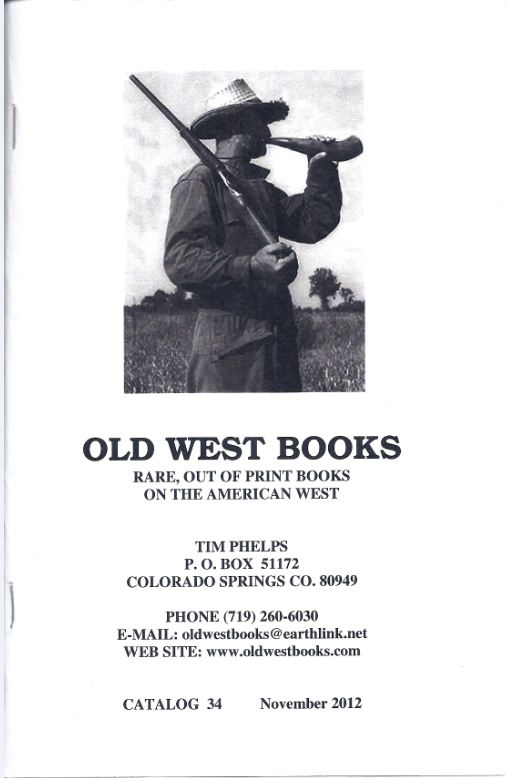 Old West Books has released Catalog 34 of rare and out of print books on the American West. Old West Books is located in Colorado Springs, and owner Tim Phelps recounts the harrowing experience of last summer's devastating fires. They came as close as the other side of the street. It is a stark reminder that, like real estate, they aren't making any more copies of old books, though unlike land, they can disappear in a moment. Get them while they are... no, “hot” is not a well-chosen word for the occasion. “Get 'em while you can” is better. Here are a few that are still available.

For those looking to start a new life on the prairie, item 3 is W.C. Avery's Cattle Raising in South Dakota The Most Profitable Field in the West and Why? The Best and Cheapest Lands and the Healthiest Climate. The claims about cheapest land may have been accurate, but I'm not so sure about the most profits and healthiest climate. This booklet was put out by the Forest City & Gettysburg Railroad Co. in 1904. That is Gettysburg as in Gettysburg, South Dakota, not Pennsylvania. The line ran 19 miles from Gettysburg to Forest City, and evidently the railroad hoped that bringing in more ranchers would be good for their struggling business. Gettysburg is the county seat of Potter County, but even today, barely 2,000 people inhabit the entire county. The railway was used to ship agricultural products to Forest City on the Missouri River, where steamboats could carry them to market. It didn't work out that well and by 1911 the railroad had closed down. This booklet provides data on climate, soil, price of land, cost of raising cattle, etc. There is a map and photographs of local scenes, including a group of Indians at council after a white man was shot. Priced at $2,250.


A costly defeat in battle made General George Armstrong Custer one of the most collectible figures from the West. After his demise, his widow, Elizabeth Custer, spent the remainder of her 50+ years of life trying to rehabilitate his reputation. Item 30 is Tenting on the Plains or General Custer in Kansas, published in 1889. This copy was inscribed by Mrs. Custer many years later near the end of her life. She has written, “Motto on General Custer's Spanish Sword, Do Not Draw Me Without Cause, Do Not Sheath Me Without Honor.” It is signed and dated 1930. Mrs Custer had lived to see warfare – with airplanes and bombs – that her husband could not have imagined when he died on the battlefield in 1876. $2,500.


Item 129 is another signed edition, this coming from a famous explorer not known for his travels in America. Nonetheless, he did do some exploring in this land, and wrote about it many years later in My Travels and Adventures in America and Asia. The author was Henry M. Stanley, known mostly for finding Dr. Livingston in the heart of Africa in 1872. However, Stanley came to America in 1859, and found himself briefly fighting for both sides during the Civil War. After the war, he became a correspondent for the New York Herald, visiting Asia before undertaking his notable assignment to Africa to track down the missing missionary. Stanley did not publish his American adventures until many years later – 1895. This copy was signed and dated in 1899. $3,750.


Item 71 is The Life and Daring Adventures of This Bold Highwayman and Bank Robber and His No Less Celebrated Brother Frank James... Hm... Wonder who that could be? This book was published in 1883, the year after Jesse James was gunned down. It is one of several books published on the notorious outlaw after his death, seeking to make the most (financially) of his demise. It's supposed to be one of the better of these tomes and a worthy item for any James collector. $850.


Some emigrants made their way over the Oregon Trail virtually without incident. For others, it was a nightmare beyond description. Such was the case for the Utter-Myers party that traveled west in 1860. They made it as far as the Snake River in Idaho when events turned tragic. They were attacked by Indians, not just shooting from afar but a full-fledged slaughter. They circled the wagons but kept on getting picked off. Finally, they decided to make a run for it, scattering as fast as they could, leaving their wagons and possessions behind. Those who survived hid at a river bank. They moved at night, hid during the day, repeating this until they felt they were safely away. However, they had no food and hunger soon set in. They killed a couple of dogs and gathered a few provisions, but it was not nearly enough. They came across some less hostile Indians who were willing to trade, but it meant giving up clothing, which in turn led to shivering nights. When they mentioned they were waiting for soldiers to rescue them, the Indians became frightened and left the area. Finally, like the Donner party, they were forced to resort to cannibalism, eating those who died from starvation. By the time rescue came, only 15 of the party of 54 were still alive. One of those was Emeline (Trimble) Fuller, who wrote the only account of this journey by a member of the party. The title is Left by the Indians the Story of My Life, published in 1892. $2,500.


Old West Books may be reached at 719-260-6030 or oldwestbooks@earthlink.net. Their website is www.oldwestbooks.com.