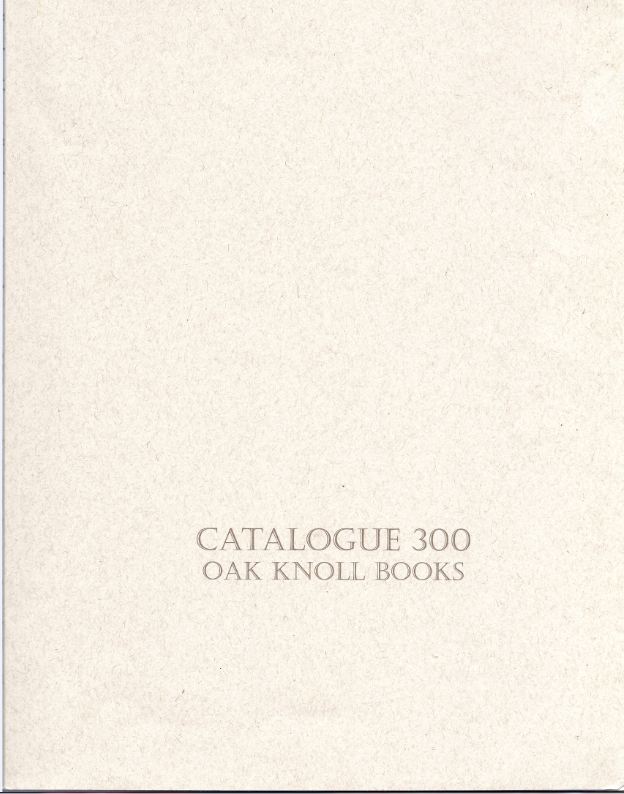 Oak Knoll Books, of New Castle, Delaware, has reached an important milestone – the issuance of their Catalogue 300. It has taken them 36 years to attain these heights, even at the prolific average of over 8 catalogues a year. This is a larger catalogue than the previous 299, for which owner Bob Fleck apologizes to those who have the other 299 neatly lined up on a shelf. This one shall always stand out. The material follows in the footsteps of those earlier volumes, books in the “books about books” category. This one is divided into subheadings for bookbinding; book collecting, selling and publishing; book illustration; cartography; Delaware history; book and graphic design; private and fine press; papermaking; printing history; reference and bibliography; type specimens; and writing and calligraphy.

While the featured books of each section (and the ones we will focus on in this review) are either antiquarian works or fine press items, there are also more recent books offered by the Oak Knoll Press. Founded a couple of years after Oak Knoll Books, the Press has been publishing items in the “books about books” field since 1978. These are titles which will help you learn more about the various aspects of the book arts. Now, we will open the catalogue to look at a few of the items to be found inside #300.


No man is more closely associated with fine bookbindings than Jean Grolier, though he was not a binder. Grolier's father was a wealthy merchant, and Jean inherited both wealth and certain government positions from him. However, it is not his day job or comfortable surroundings for which we remember Grolier. It was a his book collecting that is remembered to this day. He began building his library in the early 16th century, when printing was barely more than half a century old. What distinguished Grolier's books was the bindings. He commissioned the finest bindings for his books, making them works of art as well as repositories of knowledge. He could well be described as the father of books as art. Item 23 is Jean Grolier de Servier Viscount d'Aguisy, Some Account of His Life, by William Loring Andrews and published by the DeVinne Press in 1892. This was a limited edition (140 copies) on hand-made paper which includes plates displaying some of Grolier's bindings. Andrews, a successful businessman and notable collector himself, appropriately enough was one of the founders of New York's Grolier Club. Priced at $600.


From the category of cartography, item 82 is The Earliest Diplomatic Documents of America, the Papal Bulls of 1493 and the Treaty of Tordesillas Reproduced and Translated. This book of reproductions of maps and documents was produced by Paul Gottschalk in 1927. This is a limited edition folio printing that contains very important information on the direction America would go in the succeeding centuries. The issue was the division of the New World between Spain and Portugal. The Pope was involved in far more than spiritual matters at the time. The original division gave everything in the Americas to Spain. Not to worry for Portugal, as it was given exclusive rights in the East. The Treaty of Tordesillas would move the demarcation in the Americas a bit farther west than the bulls had allowed, thereby granting Portugal rights to eastern Brazil, but the remainder of the Americas remained available exclusively to the Spanish. Of course, other nations, notably England, would later ignore the Pope's proclamations. $1,700.


Item 134 is the Ashendene Press edition of Sir Thomas Malory's The Noble and Joyous Book Entytled Le Morte d'Arthur, published in 1913. Mallory wasn't around to approve the press proofs, he having died in 1471. This is a tale of King Arthur and the Knights of the Round Table, originally published by William Caxton in 1485. It was hand-printed by Ashendene's Charles Henry St. John Hornsby, who published 40 fine press books in his 40 years running the press. This is a fine one. $7,500.