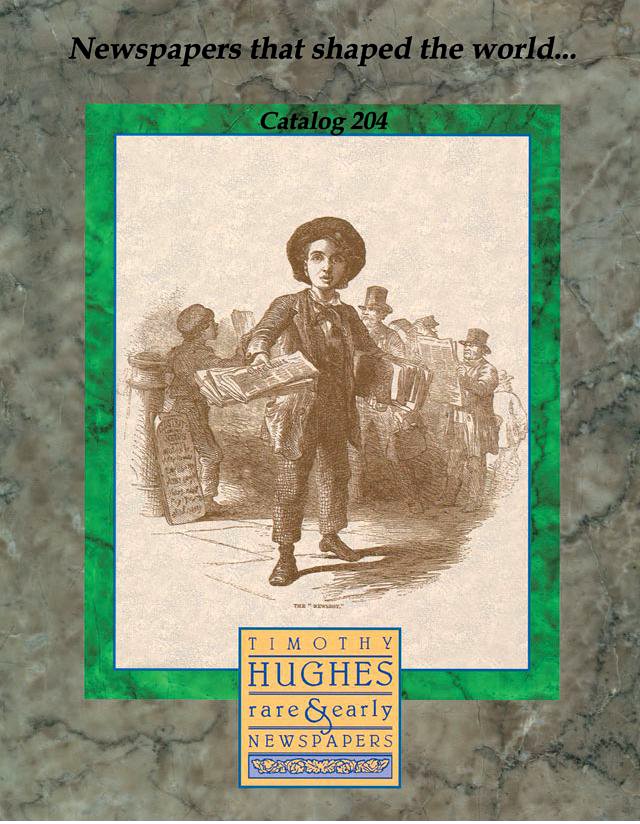 Newspapers that shaped the world.

This month we review our first catalogue from Timothy Hughes Rare & Early Newspapers. It is certainly not the first for the veteran of over 30 years in the collectible newspaper business. However, Newspapers that Shaped the World is an unusual one, larger and filled with more items than the typical catalogue. For those who collect old newspapers, or wish to know a bit more about the field, this is a catalogue you must see.

Newspapers give us a view of history as it was made, as it was seen by those who participated in it. Books can tell us about history from the point of view of hindsight, but few could be published quickly enough to be up to the moment. In this selection, we see first reports of the Great London Fire, the execution of Captain Kidd, an offer for Cotton Mather's book on the Salem witch trials, repeal of the hated Stamp Act imposed by Britain on its American colonies, reports of the Boston Massacre, Bunker Hill, Lexington and Concord, and Ticonderoga, announcement of the Declaration of Independence, surrender at Yorktown, the earliest printing of the U.S. Constitution, the election of President Washington, report of the mutiny on the Bounty, the execution of France's King Louis XVI during that nation's revolution, first reports of the death of Washington, the Louisiana Purchase, Battle of Trafalgar, declaration of the War of 1812, Waterloo, the Monroe Doctrine, the election of Lincoln and soon a civil war, emancipation, Gettysburg, death of Lincoln and end of the Civil War, completion of the transcontinental railroad, Custer's Last Stand, Bell invents the telephone, “A Flying Machine that Flies” – from the Wright Brothers, a large ocean liner that sinks (the Titanic), the San Francisco earthquake, Babe Ruth's 60th home run, St. Valentine's Day massacre, Rosa Parks keeps her seat, and man walks on the moon. And there are lots more newsworthy events than those just mentioned.


Today, much of newspapers' traditional role has been ceded to the internet. If we still read newspapers for immediacy of news, we read online editions. Print newspapers are now yesterday's news. I really don't know how people will collect breaking news, from today and days in the future, years from now. It is a difficulty comparable to collecting letters from current times, when letters are mostly emails and text messages. Fortunately, for times past, the printed newspaper preserved the news of the day. Of course, few newspapers were themselves preserved. These are ephemeral items, used, as the old joke says, to wrap yesterday's trash. Fortunately, a few copies avoid the trash buckets to survive to another time, sometimes centuries later. Timothy Hughes Rare & Early Newspapers is here to locate and offer to the public some of those survivors. Here are just a few samples of what you will find in their Catalog 204.


We will start with one of the earliest incarnations of a newspaper. It's not quite a newspaper, but one of the 16th century German “newsbooks.” They served a similar role, being dated and conveying information on current events. This one is headed Newe Zeitung, or Newspaper. It is dated 1568. It reports on the Battle of Heiligerlee, which took place on May 23, 1568. An engraving shows knights on horseback battling each other, a castle in the background. This was during the time when Spain controlled the Netherlands, and it was the first victory for the Dutch rebels in the Eighty Years War against Spanish occupation. Needless to say, there were many more battles to come. Item 548462. Priced at $2,725.


When one thinks of terrible conflagrations in London, two events come to mind - the German bombing in World War II and the Great London Fire of 1666. Item 544590 is a copy of the London Gazette from September 3, 1666. Evidently, it was printed in a safer neighborhood. On the back of this single sheet paper is the late-breaking notice, “London, Sept. 2 About two o’clock this morning a sudden and lamentable fire brake out in this City which continues still with great violence, and hath already burnt down to the ground many houses thereabouts...” It would get worse, the fire lasting until September 5. By the end, 13,200 houses had been destroyed, 87 churches, St. Paul's Cathedral, and most government buildings. It is believed 70,000 of the city's 80,000 residents lost their homes. The death toll was thought to be small, but records of poorer people were not kept, so it really isn't known. $7,350.


Item 560467 is a copy of The Connecticut Courant of New Haven, from November 17, 1779. This one has a very interesting real estate notice: “TO BE SOLD, very reasonably for Cash or Credit; A Large and elegant HOUSE and LOT; with good Stables, thereon, situate in New Haven, near the Harbeur, the Property of General ARNOLD...” That would be Benedict Arnold, a name synonymous with treason in America, but at the time still noted for his heroism and valor in Quebec and in America's great success at Saratoga. Arnold regularly made more than his share of enemies, his prickly personality, self-promotion, and greed usually more than balancing his heroism in the early days of the revolution. In colonial times, Arnold had established a mercantile business in New Haven, and its success enabled him to build the fine house that was now being sold. Arnold came to the revolutionary cause either out of patriotism, or to further his economic interest against the British who were in his way (choose your motive). After Saratoga, Arnold had various responsibilities, never sufficiently important or financially lucrative enough to please him. Washington regularly supported his General, but he had few other friends. In the spring of 1779, Arnold settled in Philadelphia, married Peggy Shippen, of a loyalist family, and generally complained about his lot. This move probably motivated the offer to sell the New Haven home he shared with his first (deceased) wife. Then again, maybe he was cashing out in advance of what he knew would come next. Though he would not receive command of West Point and have his treason exposed until the summer of 1780, at the time this notice was placed, Arnold was already supplying information to the British, and working on plans that would send him to the other side, for money, of course. It would have made sense to sell his home now, rather than risk having it confiscated for nothing later. $229.