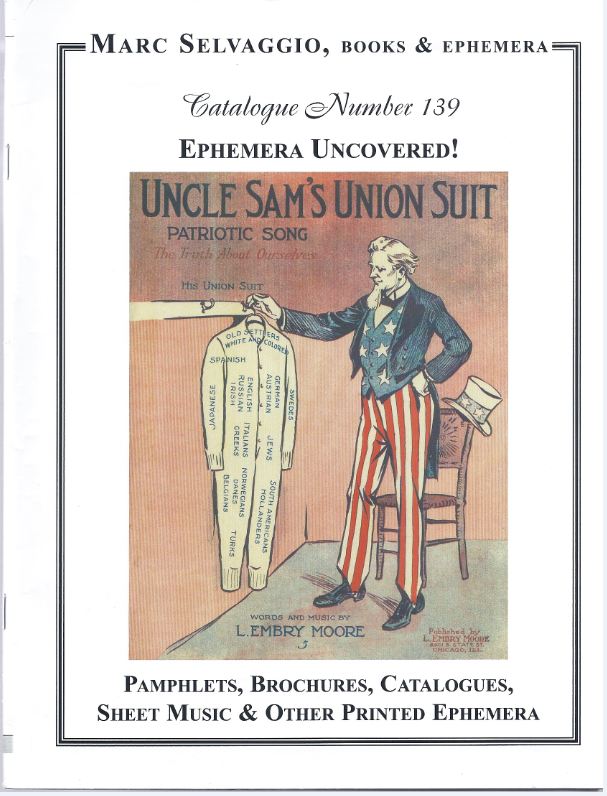 Marc Selvaggio, Books & Ephemera has issued their Catalogue Number 139. Ephemera Uncovered! It contains over 500 items of transitory printed material, items not really meant to last indefinitely like books. With many of them, the writers probably wish these few copies didn't survive. Much of it, such as medical cures and ethnic stereotypes, are best forgotten. Sometimes, what is best does not happen, so we get a chance to look back at the schemes and prejudices of another time and wonder... how could they? Most of what we find here is promotional in one way or another, a way to separate you from your money. Obviously, much of it was successful. Perhaps our grandparents weren't quite as wise as we thought. Here are a few samples.

Here is an item of extreme political incorrectness, and it doesn't even go back to the 19th century. From 1959, it is headed Flight Career. Your Future as an Eastern Airlines Stewardess. When did we stop calling female flight attendants stewardesses? As long ago as Eastern Airlines stopped flying? Whenever, among the requirements for being a stewardess are being single, 21-26 years of age, no eyeglasses, or “facial blemishes.” Undoubtedly, being young and single, and not having to fidget with your eyeglasses, are important to being able to get passengers out of a plane in an emergency, and not having facial blemishes must help in some less obvious way. Actually, these requirements are used today in hiring pole dancers. Item 371. Priced at $35.


Item 56 is the Columbia Steel Co. promotion for the San Francisco-Oakland Bay Bridge, June 1, 1935. The Bay Bridge was opened the following year. This brochure pictures and describes the building of the bridge. Columbia describes it as a “Titanic Superstructure.” Maybe it's just me, but I don't feel good about calling a structure designed to keep you above the water “Titanic.” $60.


Item 285, published by the S.H. Adams Sewage Lift Co. in 1899, is headed, On the Automatic Raising of Sewage. Evidently, raising sewage is something that is important to do, and Adams was the company you could trust with this essential task. $125.


Item 483 is a wartime (1943) piece from IBM, Typing to Speed Victory. It comes with encouragement from Margaret Hamma, the Babe Ruth of Typists (“World Champion Typist”). She could type 149 words per minute for an hour! “If ever there was a time when the typing speed and accuracy of every stenographer and typist counts most for the success of our great wartime effort, it is NOW!” And, if ever there was a desirable place to serve during wartime, it was in the typing pool. $60.


Item 117 is a promotional brochure providing Interesting Inside Information about the World's Largest Manufacturing Industry and an Opportunity for You. That opportunity offered in 1920 was to invest in the Fox Motor Car Co. No, this was not another Rupert Murdoch business, but the brainchild of Ansley Fox. Fox was a successful gun manufacturer, but his foray into automobiles was not so long lived. The Fox did get off the ground and was produced in Philadelphia from 1921-1923. It's primary feature was an air-cooled engine. As such, its major competitor was Franklin, though the latter had a run from 1902 through the Depression. That roughly parallels the life of the Fox Shotgun, which was manufactured from 1905 through the 1930s. $175.


Here's a car whose name you may yet recognize: 1915 Maxwell, At Its Price The World's Greatest Automobile. The Maxwell had a longer life than the Fox, running from 1904 until 1925. However, it remained in the public eye for another five decades as Jack Benny used it as a prop in his radio and later television show, the gag being he was too cheap to buy anything newer than the long defunct Maxwell. When his show first appeared on TV, Benny used a 1916 model, just one year removed from those pictured in this brochure. Item 154. $100.