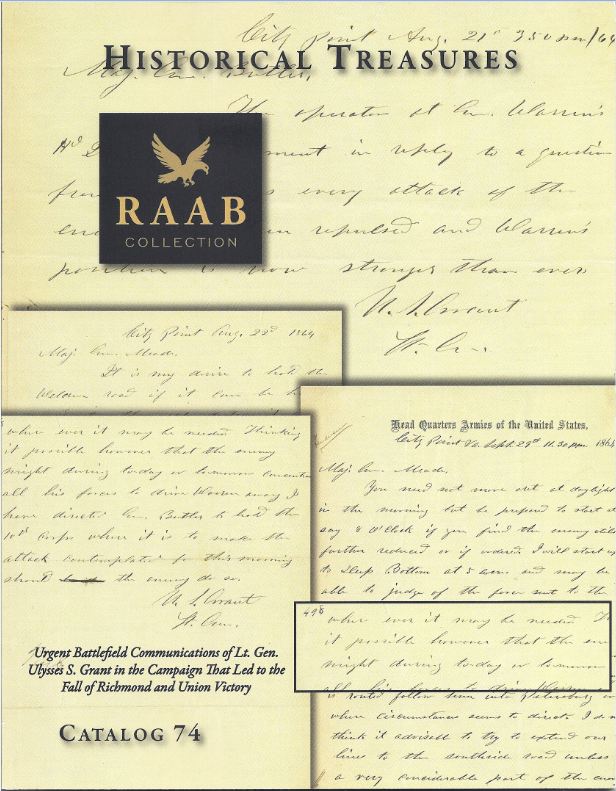 The Raab Collection has issued a catalogue for their 23rd anniversary. It is their Catalogue 74, or Historical Treasures. In keeping with their 23rd anniversary, it contains 23 items. These are mainly American documents, with a couple of notable exceptions. Exceptions or not, all are exceptional. Here are a few, starting with one of those un-American pieces.

Item 4 is the notes Winston Churchill wrote for a speech he would give to Parliament on April 13, 1939. They would be the basis for the typed speech he would have his secretary, Kathleen Hill, prepare before speaking to Parliament. British Prime Minister Neville Chamberlain had already been embarrassed by Hitler's going back on their agreement by invading Czechoslovakia. Meanwhile, Mussolini did the same invading Albania. Still, Chamberlain clung to the hope that his appeasement policy would work, that Hitler would go no further. He also made inadequate preparations, in Churchill's view, to prepare for war. Churchill's speech was nothing new for him. He had been warning of the dangers of an aggressive Germany since the early 1930s, but his warning had mostly fallen on deaf ears. Now, the British were starting to see what Churchill had envisioned years ago. In a few more months, Germany would attack Poland, drawing Britain into the war, and just over a year after the speech, Churchill would be selected P.M. in a wartime unity government. Among Churchill's comments in his notes are, “Disillusion & disappointment. Neville – who has been a second time deceived by the Dictator in whom he particularly trusts, & invites us to trust.” He also pens the Churchillian warning, “There is great danger in refusing to believe things you do not like.” However, one place where Churchill still had a ray of hope was with Italy. He felt Hitler was trying to provoke Italy into a war with Britain and France, so as to prevent Mussolini from joining with the Allies later. He thought that might still be prevented, a hope that soon would be dashed. These notes were given by Churchill to his secretary, Mrs. Hill, from whose effects they came. Priced at $47,000.


Theodore Roosevelt served in several public offices in the 1890s, an elected state assemblyman, and a couple of national appointed offices. None exactly made him a household name or a force on the political scene. However, with the outbreak of the Spanish-American War, he put together a group of volunteers, the “Rough Riders,” who achieved great acclaim for their exploits in Cuba. He was now a popular figure, and Roosevelt quickly parlayed that popularity into a run for the New York governorship. The Republican machine was not enamored of the reform-minded Roosevelt, but he promptly got his name on the ballot as a third party candidate, forcing the Republicans to nominate him or face the inevitable loss of having the party vote split. Even so, it was a close race, but late on election night, with the votes counted, Roosevelt emerged the winner. It was then that he hand wrote the words on this document, to be read to the press that night. Roosevelt wrote that he appreciated the honor and responsibility, and pledged to do all in his power “to redeem every promise I have made, expressed or implied.” He also promised “to administer the office of governor in the interests of the whole people,” singling out independents and Democrats as well as those of his own party. It was an election of momentous importance, not so much for New York, but because it propelled Roosevelt onto the national stage. As Governor of what was then the largest state in the nation, he was nominated by his party for vice-president in 1900, and when President McKinley was assassinated, it made Roosevelt the unexpected President. Few presidents have had as much impact on the course of a nation's history as did Theodore Roosevelt. Item 21. $21,500.