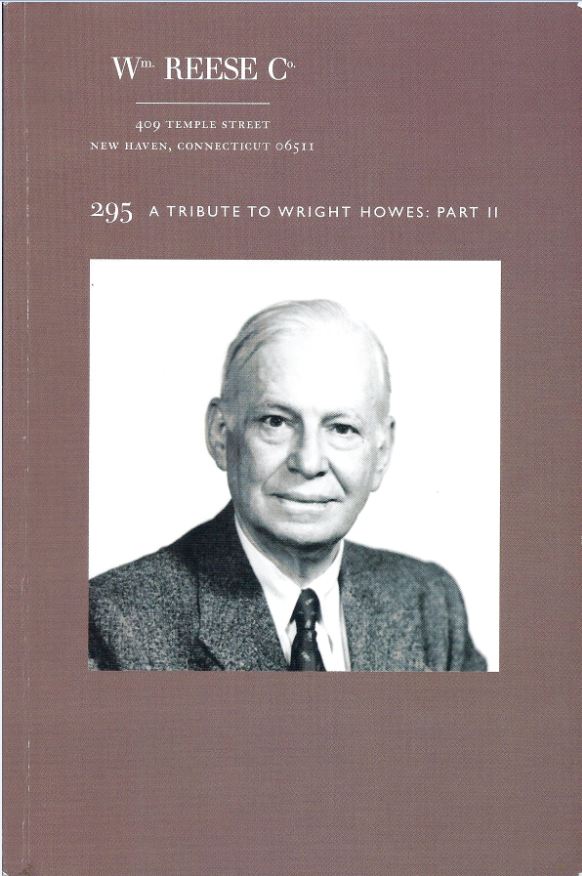 Part II of the tribute to Wright Howes.

The WilliamReeseCompany has issued PartII of ATributetoWrightHowesonthe50thAnniversaryofU.S.iana. Wright Howes was the Chicago bookseller who, late in his career, wrote a bibliography of what he considered the most important works of Americana. He listed around 12,500 titles, and, instead of assigning fixed monetary values (which he knew would soon become outdated), he assigned letters for relative value. This way, his valuations would not be made irrelevant by time. While changes in what is considered most desirable, and in what is truly most rare, have turned some of his relative valuations upside down, even 50 years later USiana remains one of the most useful and relevant guides to understanding what is important and of great value to a collection of Americana.

In August, we ran a review of PartI of this catalogue (click here). The William Reese Company has thousands of the books in stock that Howes included in his bibliography. Here, now, are just a few more selections from that inventory of books Wright Howes considered important to an Americana collection 50 years ago.

Abolition became a major cause during the 1830s, and the visceral response from the South virtually assured that civil war would be inevitable. It was as if something had been sprung on the plantation owners from out of the blue. This was not the case. Slavery was permitted by the U.S. Constitution as necessity, much of the nation's agriculture dependent on slave labor. However, there were many voices even at the founding warning the nation that, as Lincoln would later state, it could not survive forever half free and half slave. Item 1 offers a collection of those unheeded voices: MemorialsPresentedtotheCongress...bytheDifferentSocietiesInstitutedforPromotingtheAbolitionofSlavery... This includes a series of addresses to the Congress in 1791 urging an end to slavery. Published in 1792. Priced at $3,750.

Here's a tale that is no Night Before Christmas. It is a virulent attack on Thomas Jefferson, published in 1804: ObservationsuponCertainPassagesinMr.Jefferson'sNotesonVirginia,whichAppeartohaveaTendencytoSubvertReligion,andEstablishaFalsePhilosophy. The author attacks Jefferson, who was noted as something of a free-thinker for his time, for being insufficiently religious to serve as president. That author was Clement Moore, a conservative theologian whose views on religious subjects are mostly forgotten, unless you consider Santa Claus a religious subject. What Moore is remembered for is writing the Christmas poem about the night before Christmas. Item 179. $500.

The Puritans may have come to America for religious freedom, but that ideal seems to have quickly faded when others of different religious views arrived. Item 17 is an account of the abuse suffered by the Quakers in 1660s New England: New-EnglandJudged,bytheSpiritoftheLord...ContainingaBriefRelationoftheSufferingsofthePeopleCalledQuakers... This is a second edition, but first of the two parts combined, published in 1703. Author George Bishop resided in England, but was in regular correspondence with people in America, and was incensed by what he heard. Wright Howes minced few words in describing the abuse, even if he found the Quakers a bit nutty. Writes Howes, “Most exhaustive contemporary indictment of God-fearing Puritans driven by insensate religious fervor to sickening brutalities against other religious fanatics who dared to differ from themselves. Witch-hunting was bad; this was worse.” $2,000.