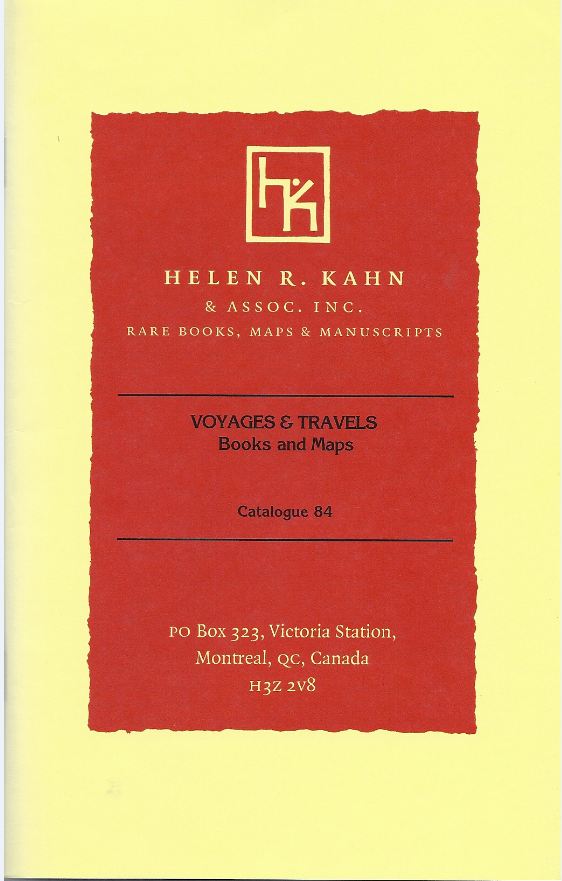 Voyages and travels from Helen Kahn.

Helen R. Kahn and Associates has issued a catalogue of Voyages & Travels. The Canadian bookseller usually focuses on works related to North America, and while there are many such items in this latest collection, it also expands to the far corners of the earth. There is much related to Asia and Europe to be found, and even some voyages to the coldest of places, the Arctic and Antarctic. The travels here are mostly very old, 18th and 19th centuries encompassing the majority, but some range from the 15th all the way to the 20th century. While some are centered on the travels themselves, others are more focused on things discovered and found in far off places. Here are a few of these works pertaining to trips taken many years ago.

Boats are an excellent way to travel, but not if they keep sinking. The British were having this problem at the turn of the 20th century with a particular class of boats. Item 43 is the Report by the Committee on Torpedo-Boat Destroyers, published in 1903. This committee was formed after the sinking of the HMS Cobra in 1901. This came on the heels of the sinking of the Viper six weeks early (the Royal Navy has not used snake names for ships ever since). There was no obvious explanation for the sinking of the Cobra. There were reports that she may have struck some floating timber, some thought she hit the mast of a sunken ship. Ultimately, the committee concluded there were structural weaknesses with the design, though the evidence for this claim is uncertain. Due to the secrecy concerns regarding defects in navy ships, this report remained classified for 50 years. Since it was not published, that is, to the public, it is a rarity, Kahn noting they have not been able to locate another copy of this report. Priced at $1,950.


Captain James Cook's three voyages are undoubtedly the most notable of Pacific exploration. However, Cook and his associates weren't always the quickest to report on their findings. The result is that some members of his crew, though officially prohibited, put out reports years ahead of the official accounts. To protect themselves, these books were published anonymously, though in time the authors' identities were determined. Item 81 is the Journal of the Resolution's Voyage, In 1772...1775. The unnamed author was John Marra, a gunner's mate. It beat the official report of Cook's second voyage by 18 months. This voyage was particularly significant as it put to rest the long accepted belief that there was a huge southern continent. Marra's chart indicates three points where Cook penetrated the Antarctic Circle, areas previously thought to be covered by land. He also reveals details of the differences that led naturalist Sir Joseph Banks to withdraw from the journey at the last moment. $12,500.


Item 23 is the first French edition of what is generally believed to be James Magra's jump-the-gun account of Cook's first voyage: Supplement au Voyage de M. de Bougainville; ou Journal d'un Voyage autour du monde... While describing it as a “supplement” to the account of French navigator Bougainville's earlier voyage around the world, Cook's journey really had nothing to do with the previous one. It was just that he covered part of the same territory, and connecting the book to Bougainville was likely seen as a good way to appeal to a French audience. $1,750.


Item 94 is a look at fossils by a knowledgeable man of his time, but a time before Darwin and an understanding of how old the Earth really is: Organic Remains of a Former World. An Examination of the Mineralized Remains of the Vegetables and Animals of the Antediluvian World; Generally Termed Extraneous Fossils. It comes in three volumes, 1808-1811. The author was James Parkinson, a surgeon and apothecary who later became a geologist and paleontologist. It was his work on a disease he labeled “shaking palsy” that led to its current name, Parkinson's disease. Parkinson put together an extensive collection of fossils. Like most of his era, he tried to relate them to biblical accounts of early times, concluding they were remnants of cataclysmic events, such as the flood of Noah. These catastrophic events were necessary to explain these findings when the belief was that Earth was barely 5,000 years old. However, Parkinson found this time line too short to explain his findings, concluding that biblical “days” must have been much longer than current days. $2,250.


It took a couple of centuries of searching to locate a northwest passage over Canada from the Atlantic to the Pacific, and when it was finally found, it was generally too icebound to be of much practical use. However, in the days before the Panama, and even Suez Canal, reaching the Pacific required circling vast continents, something a northwest passage could have avoided. Item 44 is An Act for giving a public Reward to such Person or Persons, His Majesty's Subject or Subjects, as shall discover a North West Passage through Hudson's Streights, to the Western and Southern Ocean of America. Published in 1745, this early reward required the route go through Hudson Strait, the entrance to Hudson Bay, and the southernmost possible route for a northwest passage. However, later reward offers would allow for any route, no longer being so picky considering the inability of anyone to find such a passage. $2,500.