Books from the Seattle Library of Robert Denny Watt 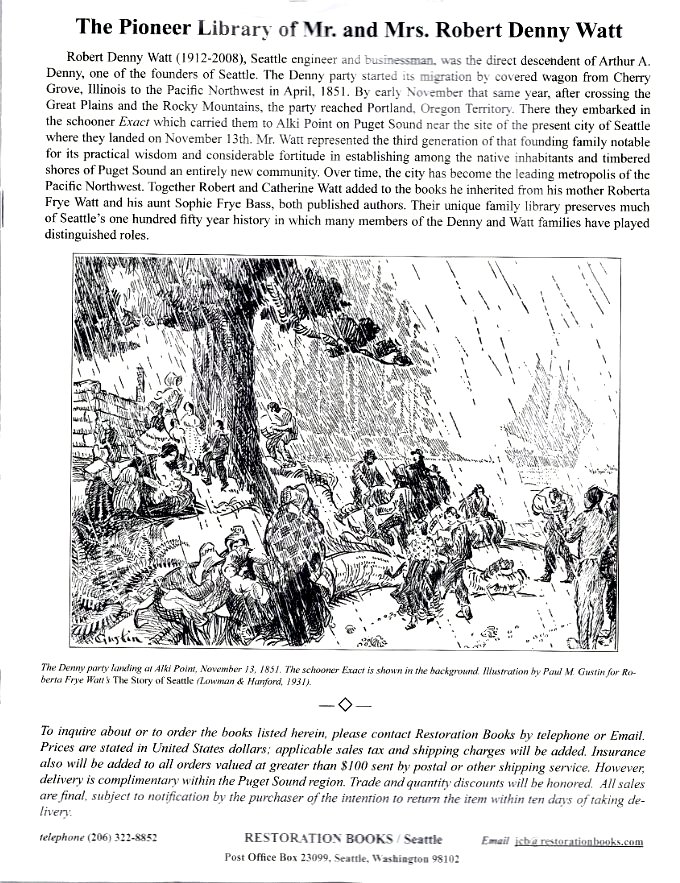 Cover image of Denny party landing in Seattle, and, oh my gosh, it's raining!

Restoration Books of Seattle has issued a catalogue of material from the library of descendants of one of that city's earliest citizens: The Pioneer Library of Mr. and Mrs. Robert Denny Watt. Mr. Watt was the great-grandson of Arthur A. Denny, leader of the Denny Party, which traveled to Oregon in 1851, but then kept on going to Puget Sound. They are generally considered to be the founders of Seattle. Arthur Denny became both a government leader and a very successful businessman in his newly established hometown. His great-grandson also would be successful in local business. Robert Denny Watt, who was born in 1912, inherited books from the family collection from his mother and aunt. That collection is heavily concentrated in material related to Seattle, Washington State, and the Pacific Northwest. However, there are also numerous books on a wide variety of subjects totally unrelated to that land. They range from dictionaries and spelling books, to titles about slavery, Lincoln, religion, English Parliament, poetry, French rivers, whatever else might have interested someone in the family at one time or another. Here, now, are a few items from the collection of Robert Denny Watt, who passed away in 2008 at the age of 95.

Since we have mentioned the role in Seattle history of Arthur Denny, we might as well start with an account he wrote: Pioneer Days on Puget Sound. It was published 1888, many years after his arrival. Denny tells of their trip along the Oregon Trail from Illinois. Despite some of the hard luck stories we often hear about these pioneers, the Denny family's trip was, for the most part, smooth and uneventful. Only once did Indians attack, but they were at a distance and their aim not very good. Once the immigrants found cover, their attackers decided to move on. Like most others, Denny planned to settle in Oregon, but a stranger told him about Puget Sound, and Denny was intrigued. Along with family and friends, they took a boat that was headed for gold country, but got off at the Sound, set up a camp, and later moved to the site that would become Seattle. By the time Denny wrote this book, his encampment had become a substantial city. Item 51. Priced at $1,000.


Here is a book by a fascinating character from Oregon Trail and much later days, complete with an interesting Denny family inscription. The title is The Ox Team or the Old Oregon Trail. 1853-1906. The gift inscription is from C.S. Denny to Lenora Denny, cousins rather than direct descendants of Arthur Denny. In it, C.S. Denny says that author Ezra Meeker had made the trip to Oregon around the same time (two years later) as Arthur Denny and that he knew the Dennys of Seattle. This seems likely as Meeker also wrote a book about early days on Puget Sound. Meeker was a hardy man. He made the trip in 1853 by oxcart, and in 1906, as part of a movement to encourage preservation of the old trail, he made the journey by oxcart again. He repeated the feat in 1910, at the age of 80. Meeker would also make the trip by train, automobile, and finally by airplane. He lived to be 98. Item 122. $500.