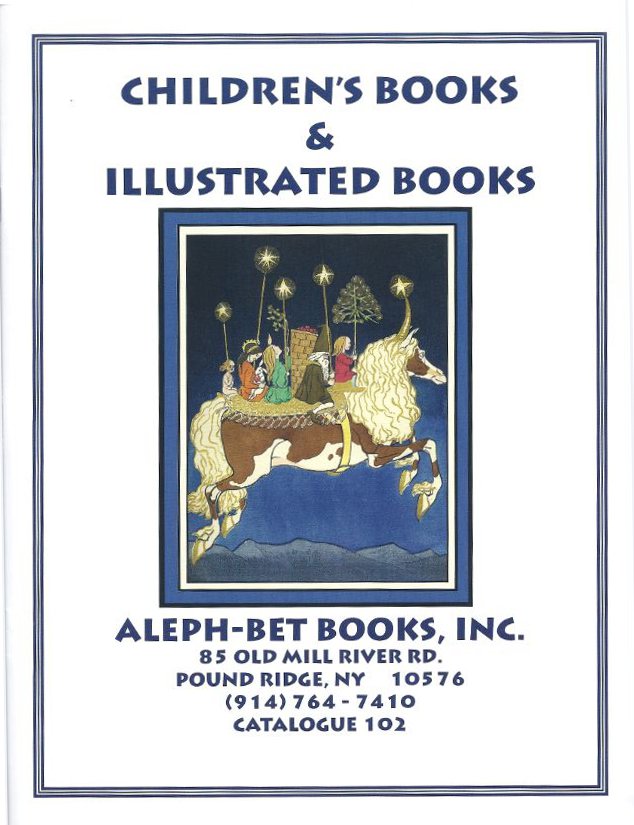 Aleph-Bet Books has released their Catalogue 102 of Children's Books and Illustrated Books. It is a catalogue filled with wonder and fantasy. We may grow old, but the books of our youth never do. Wondrous stories are backed with fantastic illustrations, works of art and imagination. Of course, a few reflect the biases of adults, particularly when it comes to other races and nationalities, but these are exceptions. For most, these books are a trip to Oz, Wonderland, or Where the Wild Things are. So, lets take a journey inside.

We will start with a set of 10 posters that were certainly intended to steer the thoughts of children in a desired direction, but in this case, the intentions were good, even if the creators might have been a bit naïve. The posters were created by the National Council for Prevention of War and the National Child Welfare Association in 1923. Just a few years removed from the war to end all wars, these posters were meant to teach children that people all over the world could live together in peace and harmony. The belief behind them was that since children readily get along with other children of different backgrounds, at least until adults teach them their prejudices, this was an an age to instill those natural instincts to get along. Each poster shows children from different lands, accompanied by a poem that reenforces the concept that we are all basically alike. Unfortunately, the years ahead would show just how difficult it is to maintain that youthful harmony among people as we get older. Item 406. Priced at $1,200.


Item 385 is a wonderful collection of material from the artist and writer John R. Neill. Other than the first book in the Oz series (The Wonderful Wizard of Oz), Neill illustrated every Oz book for the next 40 years, and even wrote a few of them in the 1940s. Neill's work was particularly admired by the Lufkin family of Connecticut, who corresponded with Neill from 1935 through his death in 1943. They even commissioned him to paint a 6' x 4' mural of Oz they hung over the fireplace. Included in this collection are three watercolors Neill drew in preparation for the mural, numerous letters, and a Christmas card of the Lufkin living room, with his Oz painting above the fireplace, that Neill drew for them. Neill dedicated the first of the Oz books he wrote to the family. $16,500.


Tony Sarg was a noted children's book illustrator, animator and puppeteer in 1934 when Conoco hired him to create a coloring book for kids. It may seem odd an oil company producing a coloring book for children, that not being a target audience for petroleum products. However, the marketing department may have hoped such freebies would bring their parents to a Conoco gas station, and perhaps develop a little brand loyalty among the young for the hottest brand going. Each of the 18 black and white illustrations, suitable for coloring, features a Conoco station. Item 495 is titled Tony Sarg's Bird's Eye Views of Conoco Land. $200.


Rival Esso was not to be outdone. They called in a heavy hitter – Dr. Seuss. Item 518 is a 1930s jigsaw puzzle titled Foiled by Essolube. The puzzle features such scary creatures as Karbo-nockus, Moto-munchus, Oilio-gobelus, and Moto-raspus. Of course, a good lube job at your friendly Esso station would eliminate those critters in a hurry. How long has it been since cars needed to be lubricated? Probably as long as it's been since Exxon stations were called Esso (in America, anyway). Actually, Dr. Seuss would not have been a major name at the time, as he spent most of the 1930s doing advertising, not children's books. Nonetheless, his fantastical characters were already evident in his advertising material. $850.