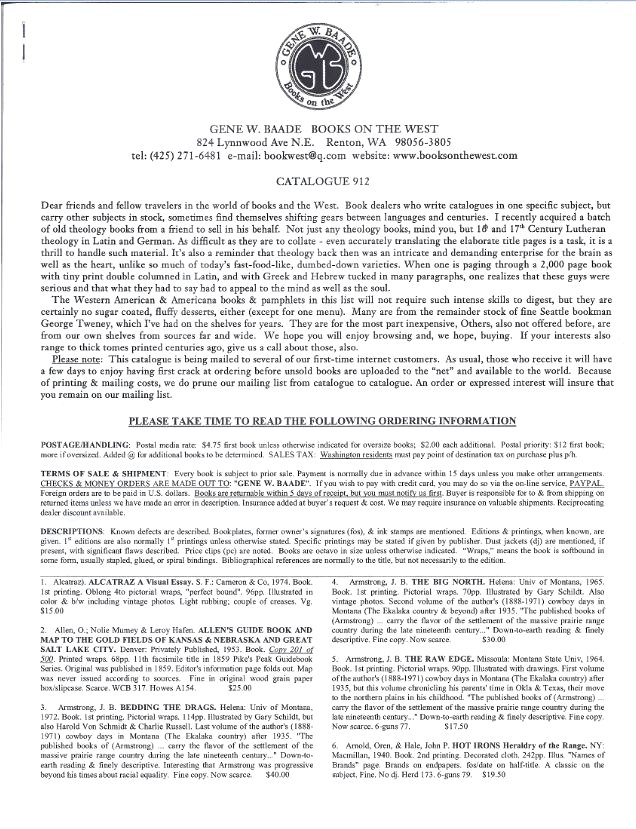 Books on the West.

Gene W. Baade Books on the West has issued his latest catalogue of what you would expect. This one is numbered Catalogue 912, and though there is an occasional exception, these titles are overwhelmingly focused on the American West. However, Baade begins with an unexpected notice. He recently acquired a group of theology books, or, to be more specific, 16th and 17th century Lutheran theology books in Latin and German. So, if you collect books on the American West and 16th-17th century Lutheran theology texts in Latin and German, you are a very unusual collector, but one who definitely should contact Mr. Baade. Perhaps a bit more likely you know someone else who collects such material. You should give that collector a heads up, as he or she is unlikely to contact a dealer of “Books on the West” expecting to find old Lutheran material. Now, we shall return to this catalogue, for more of the types of books we expect from Gene Baade.

There are few characters from the west more familiar than General George Armstrong Custer, even if for all the wrong reasons. He was more famous in defeat than in triumph, death than in life. Nevertheless, he has fascinated us ever since his last stand in 1876. Item 13 is one of the many books about this interesting personality, Custer's Indian Battles, published in 1936. The author is Col. Charles Francis Bates. Though he was a New Yorker, Bates conducted extensive research on Custer and his battles, most of which turned out much better than his final one. Bates was a good friend of Custer's widow, Elizabeth Custer, who outlived her unlucky husband by way over half a century. As such, you can be sure that Bates is sympathetic to the man, as his widow spent the rest of her days rehabilitating his reputation. However, Bates was also sympathetic to the Indians, recognizing the plight they faced through no fault of their own. This copy of Bates' book has the ink stamp of “Mary Jane Williams Battlefield Souvenir Shop Crow Agency, Mont.” Mary Jane ran a souvenir shop/gas station/tourist trap on the road to Custer Battlefield National Monument in the 1940s. Priced at $27.50.


Item 113 is a history from one of the earlier writers to fully sympathize with the predicament in which America's Indians found themselves. Lucullus McWhorter was a West Virginia native who moved to Washington State at the turn of the century. He befriended members of the Nez Perce tribe and determined to tell their story. His sympathy for them, McWhorter was later to note, did not exactly make him popular with the local non-native population. It didn't stop him, and McWhorter became best noted for conducting interviews with Yellow Wolf, an aged Indian who personally could recall the tribe's hard experiences. This book is titled Hear Me, My Chiefs! Nez Perce History and Legend, and was published in 1952, several years after McWhorter died. $60.


Here is a book that must be essential for a collection of manure, that is, books about manure, not the actual stuff: Manures, Their Composition, Preparation, and Action upon Soils... by Campbell Morfit. This is probably a fairly early book on the topic, being dated 1848, though that is just a guess. Anyway, this should still be a helpful title for organic farmers or those looking to avoid chemical fertilizers. Item 122. $95.


This sounds like a real western title, though perhaps it is different from what you might think: “The Cow Killers” With the Aftosa Commission in Mexico. What this actually is, Baade informs us, is “one fun read about the attempt to eradicate hoof & mouth disease south of the border in the 1940s & 50s.” “Aftosa” is the name by which hoof and mouth disease is known in Mexico. In the late 1940s, there was an epidemic of this highly contagious disease killing tens of thousands of cattle in Mexico, and Americans were intent to keep it from spreading north. Apparently their work was at times controversial among Mexicans who suspected something more than just vaccinating cattle against disease was going on. This is a 1984 second edition of Fred Gipson's book originally published in 1956. Before you assume this must be a boring read, we should note that Gipson was the author of several entertaining fiction works, most notably Old Yeller. Item 58. $27.50.


Here is an 1871 title that really belongs in a catalogue of books on the east. It is Descriptive and Historical Guide to the Valley of Lake Champlain and the Adirondacks. It covers such areas of northern New York and Vermont as Lake Champlain, Lake George, the Adirondack Mountains, Burlington, Camel's Hump and St. Albans. It includes descriptions of area railroads. This was the era when the opening of railroads was making this northern area accessible to tourists from New York City, a beautiful and cooler place to escape the heat of the city. Item 130. $95.


Most people think of Oregon as lush, often rainy territory. That may be true of its coast, but once you get to the eastern side of the Cascade Mountains, it's more reminiscent of its neighbor to the south – Nevada, not California. Item 76 is E.R. Jackson and R.A. Long's The Oregon Desert, published in 1964. It is a large, sparsely populated territory, much of it almost devoid of human inhabitants. $35.