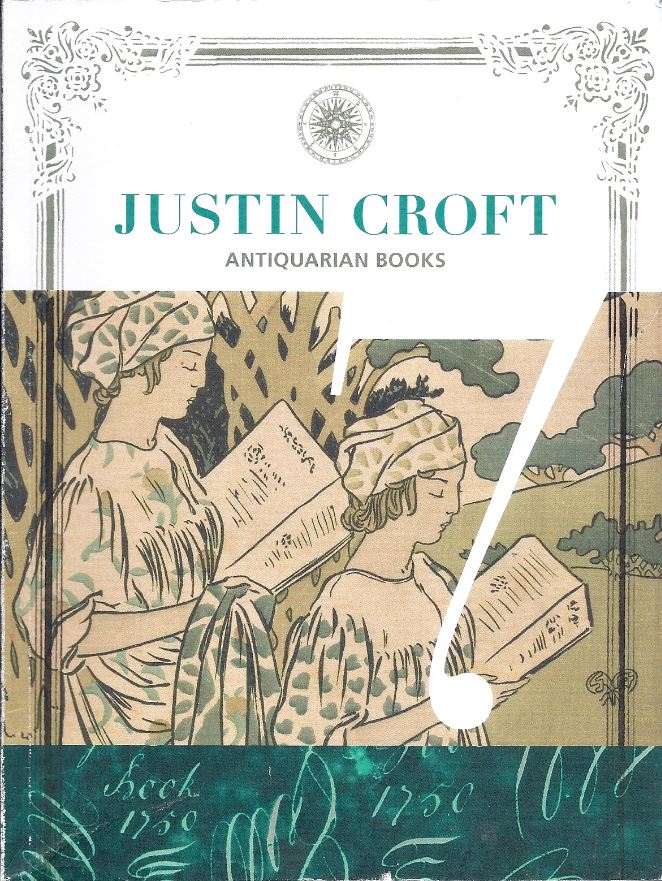 Justin Croft Antiquarian Books has prepared their Catalogue 7. There is no further description of the material provided, and it took a careful search to even discover its title is “Catalogue 7.” So, here is my best attempt at a description. It is filled with material, generally a couple of centuries old, that usually pertains to personal issues, or to thoughts about more elevated matters by regular folks. A great portion of the items are in manuscript, often filled with illustrations, dealing with matters that concerned the individual creator. The catalogue provides a fascinating look at the issues that concerned people in their everyday lives centuries ago. This is real life in another age. Here are some of these items.

We start with a schoolboy's manuscript geography by one of the two most famous Lincolns in American history. You probably can guess who the other famous Lincoln was. This one is Benjamin, a noted general during the American Revolution. Benjamin Lincoln was present for Burgoyne's surrender at Saratoga early in the war, and was at Washington's side when Cornwallis agreed to the final surrender at Yorktown. After his years in the military, Lincoln served as America's first Secretary of War. Benjamin was related to Abe, but very distantly, through ancestors far back in their British past. Benjamin's illustrious career would not rise until the Revolution. Item 32 goes back much farther. It is his handwritten geography schoolbook from 1750. He was 17 years of age at the time. It contains such things as his descriptions of foreign countries, including England, China, Japan, India, and several African nations, among them Biledulgerid (in the North African desert), Zaara (Sahara), and Negroe Land (along the East African coast). Priced at £2,000 (British pounds, or roughly $3,200 U.S. dollars).


Here is a book that a barkeeper might find handy: The tavern-keeper or publicans directory, and family assistant, containing receipts for the managing, colouring, and flavouring of foreign wines and spirits... by E. Morgan. Published circa 1820, it includes both recipes for various drinks and how to spruce up foreign wines. Perhaps French wine didn't have quite the same caché then. It includes instructions for recovering wines that are past their prime, such as adding crushed oyster shells of crab claws. The next time you find a crab claw in your glass of wine, you'll know someone is pushing off their bad stuff on you. Item 37. £1,300 (US $2,080).


Now for another useful guide, from 1787. This one is A complete guide for a servant-maid; or, the sure means of gaining love and esteem. Ann Walker provides helpful hints for dealing with the intrigues these women faced working in the households of the wealthy and privileged. Among the topics are avoiding sloth, sluttishness, giving saucy answers, liquorishness, being too free with men servants, giving advice too freely, chastity, temptations from the master, if a single man, if a married man, if from the master's son, if from gentlemen lodgers, to which other useful things are added, like how to get spots or ink out of linen. Ms. Walker wisely points out, “corruption, though it begins at the head, ceases not its progress till it reaches the most inferior parts, and it is high time to endeavour a cure of so growing an evil.” Indeed! There appears to be nothing known of Ann Walker other than that she was described as a resident “near Bath.” Item 59. £4,500 (US $7,195).


Item 15 is an album of 46 hand-drawn clever caricatures labeled Album de Caricatures dessinées par M. Cloquet Professeur a la Faculté de Médicine de Paris vers 1820. Jules-Germain Cloquet was a physician and surgeon who was on the medical faculty in Paris. However, he was also an illustrator, having illustrated several medical books, and, as a family friend, served as an older traveling companion for a young Gustave Flaubert. Cloquet has captured street scenes with his caricatures, such as a rag picker beating off dogs, various uniformed soldiers, drunks, beggars, hawkers, a hunchback rat catcher with dead rats strung to a pole, plus a few unrealistic images, such as a trio of skeleton musicians. £4,500 (US $7,195).