Works from the Four Corners from Back of Beyond Books 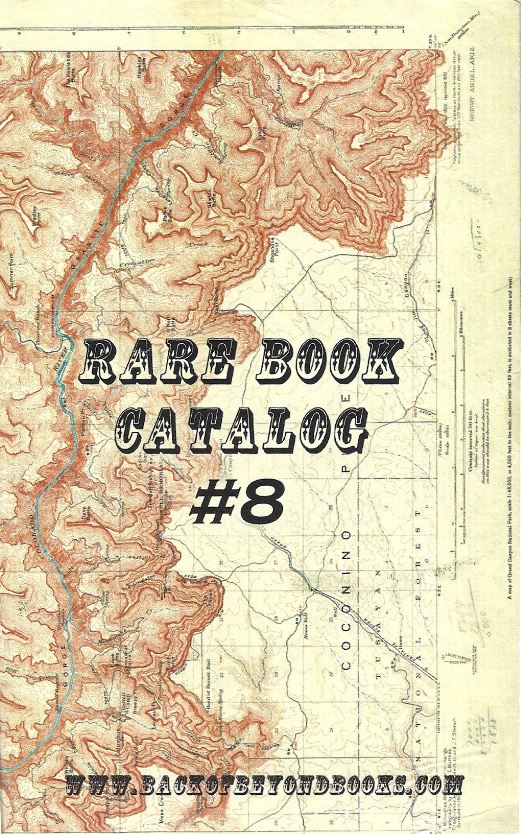 Books from the Four Corners.

I recently returned from my summer vacation, a sojourn through the beautiful states of Arizona, Colorado, New Mexico and Utah, to find a surprise in my mailbox. It was the latest catalogue from Back of Beyond Books of Moab, Utah, Rare Book Catalog #8. As the introduction explains, “This issue features titles from the states of Arizona, Colorado, New Mexico and Utah.” This review is not work, it is simply an extension of my vacation. There are few places more scenic and spectacular than the Four Corners of the American Southwest, from high mountains to flaming red canyons and deserts and even a few plains. The snow-topped peaks didn't have much snow this year, a victim of either unusual heat or drought. Nevertheless, the beauty to be discovered in this region astounds. Meanwhile, the people are a hearty lot, used to living on the edge of civilization. No, it is not the isolation of years ago. Moab, once a sleepy little mining town, is a mountain biking and tourist center today. Nonetheless, this is still an area where one can get away from civilization, and experience the land free from the clutter of today's suburban world, a place where you can still imagine what the writers or subjects of many of these old books experienced in another time. Now, here are some books from this world in back of beyond.

Life was never easy in this rugged land, but item 10 takes us back to a particularly hard era: Cliff Dweller Christmas Annual 1938. This was during the Great Depression, and this booklet was published by the Civilian Conservation Corps working at Mesa Verde National Park in Colorado. The CCC provided jobs for out-of-work men from the 1930s through the early 1940s, often working on preservation projects such as this. This booklet describes the projects that were accomplished and includes anecdotes from the men working at the location. CCC camps were found throughout the Four Corners states at the time, though many of the workers came from states far to the east as well as locals. Priced at $20.


One of the earliest explorations of the Colorado River basin in Utah has largely been forgotten. In 1859, the U.S. government sent Capt. John Macomb, along with naturalist John S. Newberry, with an expedition to map out a route from Santa Fe to the convergence of the Grand and Green Rivers (the Colorado River above the confluence was known as the Grand in those days). It is suspected the underlying reason for wanting to find such a route had to do with issues the government had with Mormons in Utah at the time. Macomb didn't find a clear route, but the expedition did learn much about the geography, geology, and botany of the area, most of this data gathered by naturalist Newberry. However, they never quite made it to the junction of the two rivers, a deep canyon in the barren badlands area in today's Canyonlands National Park. The results of their expedition were almost lost, as the intervening Civil War prevented publication of their findings. It was not until 1876 that the results were finally published as Exploring Expedition from Santa Fe, New Mexico, to the Junction of the Grand and Green Rivers of the Great Colorado of the West. Item 45. $3,200.


It may have been impossible to actually get to this territory at the time, but that didn't stop people from selling lots there. Item 23 is an 1861 certificate for a share in Grand Port City containing 50 lots. Grand Port City was supposedly located south of the confluence of the Green and Grand Rivers, one of the last parts of continental America ever to be explored. No one would even pass through the area until John Wesley Powell rode down the river in 1869, seven years later. He could have then told them that the place was thoroughly unsuitable for a port, an area of rapid whitewater surrounded by enormous cliffs with little vegetation. Offered are two certificates, the lucky owners being William and Martha Slaughter. $650.


English is a difficult language to read, what with its silent letters and inconsistent sounds for many letters. Nonetheless, as Brigham Young could tell you, it is very difficult to get people to change their language. Young attempted to get his Mormon flock to adopt a new written language, based on the created Deseret alphabet. All this strange looking alphabet was was an attempt to create phonetic symbols for spoken English. Young figured it would be much easier for children to learn to read a phonetic version of English, and that this would be particularly helpful for foreign converts who might learn to speak English, but not write it. Some suspected Young might have also wanted to make it hard for others to read Mormon writings, or for Mormons to read books not produced by their leaders. Whatever the thought processes, the influential Young had little success with this project. After 15 years of preparation, the Church finally began printing books in Deseret. At some point, it must have dawned upon the church fathers that reprinting all of the world's literature in a new language would be a difficult and costly undertaking. In all, only four books were ever published in Deseret, and by 1870, the project was abandoned. Item 21 is the Deseret Reader, First and Second Volumes, published in 1868. Other than these, only the Book of Mormon and the First Book of Nephi were ever published in this odd alphabet of 38 letters. $450.