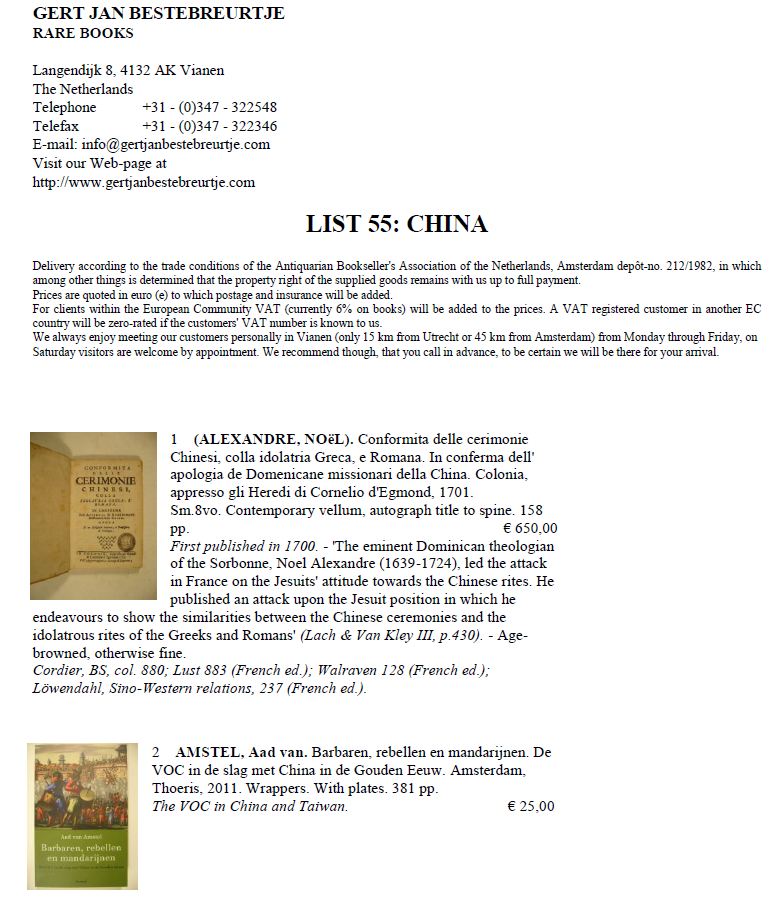 Gert Jan Bestebreurtje Rare Books has issued their List 55, with the subject being China. These are works from a western perspective, primarily by Europeans who visited China in an era when the land was mostly unexplored by outsiders, rather than a source for everything we buy. Outsiders were not always welcomed in Asia with open arms, but in time, walls broke down, and Europe learned progressively more about the mysterious East. Here, now, are a few of those books that opened European eyes to a world they little understood.

We will start with one of the earlier visits by a European to Asia, a tale so extreme that most people believed much of it was fabricated. That is likely true, and yet it provides a first glimpse at places that had never before seen a European. The title is Wonderlyke reizen van Fernando Mendez Pinto, the first Dutch edition of the 16th century exploits of Fernando Mendez Pinto. Pinto was a Portuguese explorer, first heading to Asia, India specifically, in 1537. However, later voyages would take him to China, Japan, and Indonesia as well. Pinto entered China through the Yellow Sea, but was, he claimed, taken prisoner and forced to help build the Great Wall. He was eventually freed by invading Tartars, making his way to a pirate ship that agreed to take him away. However, that ship sank near Japan, whereupon he became one of, if not the first, westerner to visit Japan. He claimed to have introduced the gun to the Japanese. In time, Pinto made his way back to Portugal, and wrote the manuscript for his book, though it was not published until 30 years after he died. Pinto earned the unflattering sobriquet “Prince of Lies,” as his account, including numerous imprisonments and escapes, was too much for his countrymen to believe. Exactly how much is accurate, and how much an exaggeration, is hard to know. Item 164. Priced at €650 (euros, or about $817 U.S. dollars).


Pinto may have been given to exaggeration, but not so George Psalmanaazaar. Psalmanaazaar authored An Historical and Geographical Description of Formosa, published in 1704, and the man of many “a's” perpetrated outright fraud. Nothing in his description of Formosa was true. Psalmanaazaar pretended to be an island native, a convert to the Church of England, but in reality, he was a Frenchman spinning tall tales. He used some knowledge from the books of others, but built it up with fantastical stories. Among those was the claim that 18,000 boys were sacrificed every year. Psalmanaazaar also invented a Formosan language, which he would quote. The book quickly generated some suspicion, and yet despite its absurdity, it developed a large following of believers. Boswell attributed this to the claimed connection of the islanders to the Jesuits. The English were only too glad to believe anything horrible about the Catholic Church. In his Life of Johnson, Boswell says of the tale, “So gross is the forgery that it almost passes belief that it was widely accepted as a true narrative.” Item 170. €1,500 (US $1,887).


Here, now, is an entirely honest, if not completely accurate, depiction of a trip to China. It is Atlas du voyage Peking a travers la Mongolie en 1820 et 1821, published in 1826. It is the atlas volume of Egor Timkowski's journey from Russia to Peking, where he was heading up the ten-year Russian embassy in that country, beginning in the year 1820. Timkowki traveled from Russia through Mongolia to reach Peking, and kept maps, as best he could produce, of the journey. It includes a plan of the Forbidden City, the first to appear in a western atlas. Item 206. €975 (US $1,226).