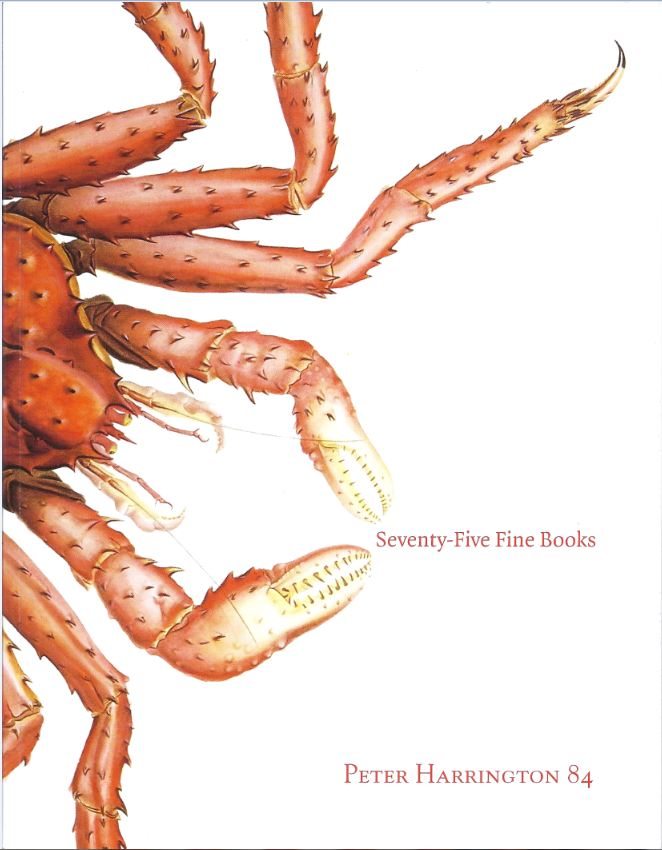 Peter Harrington has issued their 84th catalogue, Seventy-Five Fine Books. These are every bit as fine as the title says. This is a collection of important books, in top condition, in first or other important editions. There are not many you won't recognize. They range from early printings of antiquarian works to science, travel, literature and other fields. Many types of books are represented, with importance being the common thread. Here are a few.

In 1663, Robert Hooke placed some tiny specimens under his new, compound microscope. He was amazed by what he saw. Within a few years, so would the rest of the world. He began to see things invisible to the naked eye. He began placing everything under the microscope, and drawing what he saw. His drawing of a flea, the size of a bird, is probably the most famous, not to mention horrible sight he drew. The flea is not a handsome creature. He also gave us mosquitoes and fungi, but what was most important is that he gave us our first look at cells. He was the first to describe these basic units of tissue as being a “cell.” Item 12 is a first edition, first issue copy of Micrographia: or some Physiological Descriptions of Minute Bodies Made by Magnifying Glasses, published in 1655. It contains 38 plates of what Hooke saw. Priced at £65,000 (British pounds, roughly $101,780 U.S. dollars).


Item 42 is a very special copy of a work that is performed as a play every Christmas all over the world. That, naturally, is Charles Dickens' A Christmas Carol. There is no need to recount the plot line as everyone knows it. This copy is unique as it contains Dickens' inscription to “George Cattermole from his friend Charles Dickens, Eighth November 1845.” Cattermole was an artist and illustrator who illustrated a couple of Dickens' books. However, he was more than that. He was a close personal friend of the great writer. Dickens possessed a couple of his friend's paintings, and when Cattermole died, Dickens worked “tirelessly” to raise money to support his widow and children. This is a copy of the 1844 edition. £50,000 (US $78,230).


There is probably no greater book in western literature, certainly in English literature, than this one. Item 10 is a copy of Mr. William Shakespeares Comedies, Histories, and Tragedies. This was only the second appearance of his works, what is generally referred to as the Second Folio, published in 1632. After the playwright's death in 1616, it was likely that all of his great works would soon disappear. His plays had been performed, but they were not published. Fortunately, a group of his friends, realizing something needed to be done to preserve them, published this collection in 1623, in the edition known as the First Folio. Two more folio editions would be published in the 17th century, and then with the 18th century, countless editions of his various works would roll off of presses. The first edition is extremely difficult to find now, and all four folios are highly collectible. £385,000 (US $602,500).


Item 5 is the great work of the 16th century scientist William Gilbert. If you are wondering who gave electricity its name, it was Gilbert. That comes from the Greek word for amber, from which Gilbert created static electricity. Gilbert was particularly focused on magnetism, and concluded that the earth itself was a large magnet, that being the explanation for the working of a compass. He also was a strong supporter of the Copernican theory of the universe, long before Galileo's support of the same got him in serious trouble with ecclesiastical authorities. The title of Gilbert's book, published in 1600, is De Magnete, Magneticisque Corporibus, et de Magno Magnete Tellure. £30,000 (US $46,975).