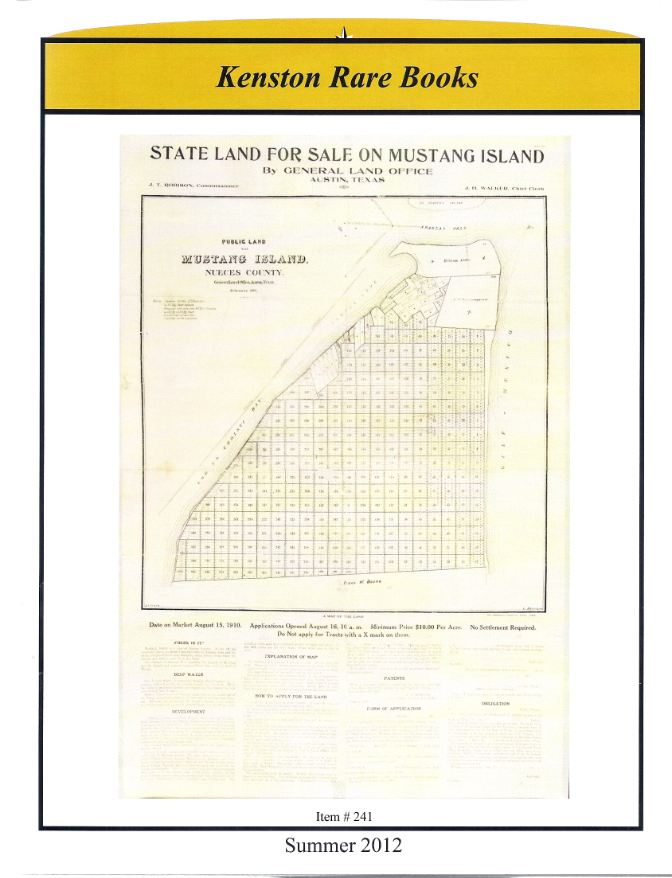 Kenston Rare Books has issued their catalogue for Summer 2012, Fine Books on Texas and the American West. Offered are 270 items, some old, others relatively recent, though the topics of all relate to historic events and times, 19th and early 20th century. The focus is on Texas, but there are works that relate to other areas of the Southwest, notably the states of New Mexico and Arizona, and the nation of Mexico. Naturally, you will find books pertaining to cowboys and Indians, lawmen and gunslingers, cattle, farming, railroads, land development, and many local and county histories. The history of Texas and the West can be found in the pages of the books in this catalogue, these being a few samples.

Item 254 provides an account of Texas Indian behavior by a perhaps not entirely objective observer: Indian Depredations in Texas. It recounts numerous 19th century Indian battles, at least through its publication date of 1890. The book also provides sketches of notable Indian fighters and victims. The author was John Wilbarger, and according to Howes, “Wilbarger was scalped by Comanches and had good reason to hold a personal grudge.” Priced at $550.


Item 241 is the broadside pictured on the cover of the catalogue. It announces State Land For Sale on Mustang Island by General Land Office Austin, Texas. The date was 1910, and the lots at the northern end of this island just to north of Padre Island were to be auctioned for a minimum of $10 per acre. There are some million dollar homes to be found on this tract of $10 lots today. $2,775.


Just about the most notorious of Texas gunmen was a man named after a notable theologian, John Wesley Hardin. Hardin grew up with a deep mean streak, and a serious disregard for human life, at least the lives of others. He reportedly killed his first man at the age of 15, and probably another couple dozen or so through the rest of his career. No one knows for sure. He shot others he worked with on cattle drives, and lawmen who got in his way. However, he did avoid one in particular, the legendary Wild Bill Hickok. Hardin did, at least, value his own life. Eventually, he was captured in Alabama and sentenced to prison in Texas. Amazingly, after 17 years behind bars, he was pardoned. Set free in 1894, Hardin, having pursued legal studies in jail, set up shop as a lawyer in El Paso. It was also during this period after his release that he wrote his autobiography, which was published in 1896 under the title The Life of John Wesley Hardin, From The Original Manuscript, as Written By Himself. It is regarded as an accurate and frank account of the man's life. Hardin did not get to enjoy the fruits of his career as an author. In 1895, he got into an argument with a local lawman and this time he lost the gun battle (actually, he was shot before he had an opportunity to draw his gun). His autobiography was published posthumously, and includes an addendum on later events Hardin was unable to write about himself, including his shooting, and the later shooting of his killer, John Selman. Item 120. $225.


If John Wesley Hardin was one of the most hardened and vicious of criminals, Bill Carlisle must have been one of the kindest and gentlest of the breed. Item 41 is Bill Carlisle, Lone Bandit: An Autobiography. Carlisle was one of the last train robbers, a man who held up several trains in Wyoming in 1916. He was a little short of money, being disappointed he could not buy a Christmas present for his niece. He would sneak onto trains, hold up passengers for their money, but always treating them politely, and then jump. He would not take money from soldiers and left a tip for a porter. Ultimately, he was caught, imprisoned for life, escaped and held up another train in 1919, was caught again, and paroled in 1936. He became a legitimate businessman, operating a lunchroom and gas station, and in 1946 published his autobiography. $40.