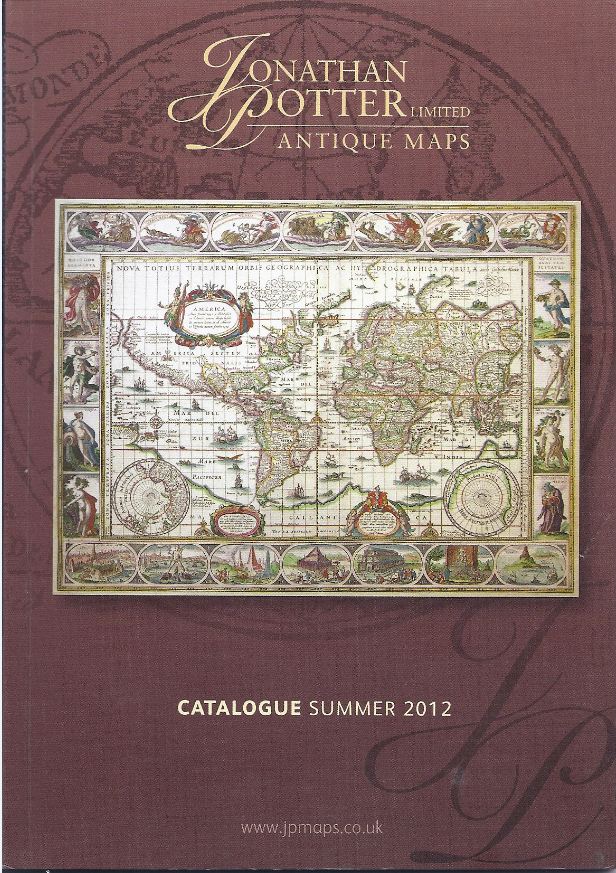 Jonathan Potter Antique Maps has released their Catalogue Summer 2012. No surprise as to what will be found here – maps. Lots of them. They range from the 15th century to the middle of the 20th. Most are quite old, dating to times when knowledge of geography was still imperfect. One can see the world evolve, at least in the eyes of its beholders, as new discoveries added to mankind's understanding of the world they inhabited. From the 15th century, when to Europeans the known world was a much smaller place, to the discovery of new lands in the East and West, to the refining of the coastlines of these new discoveries, and lastly to understanding the internal regions of these new lands, the evolution of man's understanding of their world can be traced through these maps. Here are some of those steps along the way as seen on the pages of Jonathan Potter's latest catalogue.

We will start with the world as it was known for 1,500 years, perhaps longer, at least to those in the West. There was little difference in the world as it was known in antiquity and at the dawn of the Age of Discovery. In 1493, Hartmann Schedel published his history of the world, known commonly as the Nuremberg Chronicle. Item 1 is the world map from this great work. The world to Europeans had not changed since Greek and Roman times, consisting of Europe, southern Asia, and northern Africa. Schedel's map shows this small world being supported by the three sons of Noah, while various heads blow winds from different directions. Along the side are various strange-looking creatures thought, or perhaps surmised, to live in the far corners of the earth. What Schedel would not have understood as he prepared his work was that a man named Columbus was discovering vast new land masses that would forever change the size and understanding of what was out there. Schedel's map was, in effect, the last look at the ancient Ptolemaic world, soon to be changed forever. Priced at £14,000 (British pounds, or roughly $21,686 U.S. dollars).


Item 4 is a 16th century printing of one of the most important maps ever published, it being one of the first to display the New World. Martin Waldseemuller first published his map of the New World in 1507, calling it “America.” However, when he reprinted it in 1513, he changed it to “Terra Nova,” perhaps recognizing that Columbus, not Amerigo Vespucci, discovered it. By then it was too late. The name “America” had stuck to the land. Laurent Fries republished a smaller size version of Waldseemuller's 1513 atlas four times between 1522 and 1541. Item 4 is taken from the 1541 printing. Fries made some minor changes updating current knowledge, and added a vignette showing some South American cannibals and an opossum. The last two editions of Fries' atlas were published by Michael Servetus, a Spanish cartographer, but also a scientist, humanist, and theologian. That last role got him in much trouble, and reduced the copies of his books available as many were burned. Servetus did not believe in infant baptism, nor did he believe in the orthodox view of the Trinity, arguing that the Trinity represented three aspects of one God, rather than three distinct beings. Such differences could get you in serious trouble in those days, and not even reformist Protestants had much mercy on nonconforming thoughts. Servetus was burned at the stake for his heresies, with John Calvin being a leader in pushing for his execution (Calvin did call for the more merciful beheading, but others overruled his request and burned him alive). £12,800 (US $19,806).