The Founding of America from Seth Kaller Historic Documents 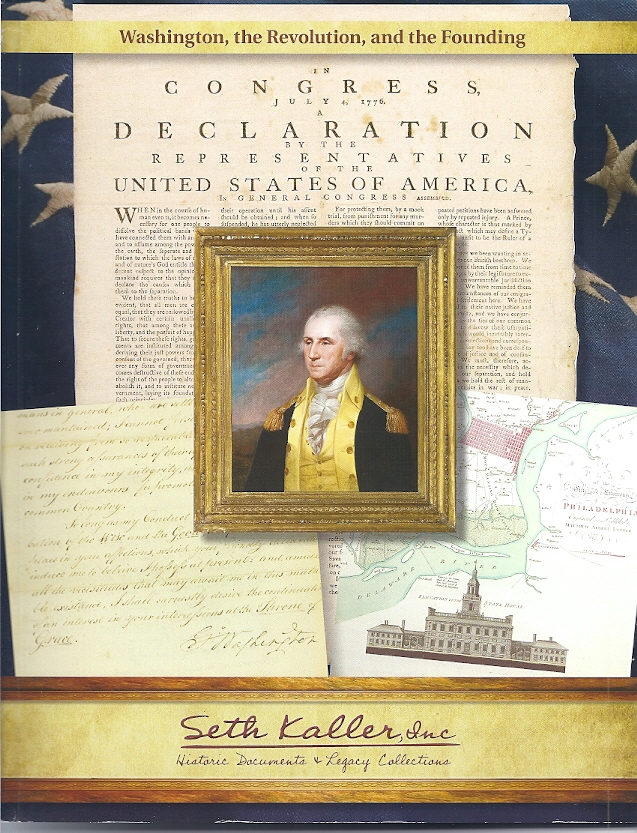 Seth Kaller, Inc., Historic Documents & Legacy Collections has issued a catalogue entitled Washington, the Revolution, and the Founding. For Kaller, original documents provide a means “to see the unfolding of America's destiny.” Here, the focus is on the early days of the nation, ranging from the uneasy decade before the colonists decided reconciliation with the British was hopeless and rebelled, through the administration of America's first president and revolutionary leader, George Washington. Indeed, these are the days when America was created and chose the path along which it would rise, and occasionally stumble, as a nation. Here are a few of these seminal documents being offered.

Before George Washington was President, before he was a general, or the father of his country, he was a land surveyor. He trained for the profession at the age of 15, and soon thereafter, he was off to the sticks to begin surveying uninhabited frontier land in Virginia. Washington became connected with the wealthy Fairfax family through his half-brother, Lawrence, which led to an appointment as an official surveyor for Culpeper County, now in West Virginia. It was hard work under difficult, sometimes dangerous conditions, but it also was a well-paying job, and helped to raise the social standing of the ambitious young man who would find himself in the military a few years later. Offered is one of those early surveys Washington made on the frontier. It is dated November 4, 1749, when Washington was 17 years old. It covers 412 acres of land owned by Ann Dunbarr. It contains Washington's signature, generally recognizable though not quite yet matured. Priced at $78,000.


The American Revolution may not yet have been officially declared, but the fighting began in 1775 when the British made their run at Lexington and Concord. The purpose was to capture weapons held by local militias, to prevent their being used against the British. However, unexpected confrontations broke out, dozens on each side were killed, and after reaching their destination, the British were forced back to Boston, American militiamen shooting at them as they fled. Offered is a contemporary account published in the Connecticut Courant and Hartford Weekly Intelligencer. Dated May 8, 1775, less than three weeks after the battle, the account proclaims the British demand shortly before the battle began: “Disperse you damn'd rebels – damn you disperse!” They didn't, someone fired a shot, and the Revolution was on. The article also describes the “express riders” who brought the warning, something of an American legend but here described in a contemporary account. It also lists those killed at Lexington, the first to die in the American Revolution. $8,500.


Despite the fighting at Lexington and Concord, the American colonists would not declare their independence until over a year later, when, as we all know, on July 2, 1776, the Continental Congress made its declaration. July 2? Yes, that isn't a typo. Independence was declared on July 2, but it took two more days for the official document to be drawn up. The June 1776 issue of The Pennsylvania Magazine records this momentous event, though only in the briefest words. Only a small amount of space was available, but that was because the new issue should have already been printed. However, a shortage of paper required a few days delay, leaving just enough time for the announcement: “July 2. This day the Hon. Continental Congress declared the UNITED COLONIES FREE AND INDEPENDENT STATES.” Elsewhere in the issue is the text of Pennsylvania's resolution calling for a declaration of independence. $8,000.


Here is a most upbeat letter from Major John André back home to Mom in England. André was serving with the British in America during the Revolution. On September 1, 1780, he writes, “Good fortune still follows me...I am full of gratitude towards the General for so much Kindness and impress'd with the greatest Zeal to deserve it, but can hardly look back at the steep progress I have made without being giddy.” He notes that his mother's pleasure in hearing of his rise in the military is undoubtedly as great as his own. Unfortunately for Major André, that good luck was about to run out. A few weeks later, he traveled by boat from New York to West Point to meet with the turncoat (still unknown to Americans), Benedict Arnold, but his transportation departed ahead of him when spied by American forces. He tried to escape to New York by land but was captured. When the capturing soldiers realized his mission, André was tried as a spy. The British argued that he was a prisoner of war, but not even Washington was buying that argument. As a prisoner of war, he would have been held until the war concluded, but a spy could be hanged. Just a month after this letter was written, that would be André's fate, though his contact, Benedict Arnold, would manage a successful escape. $39,500.