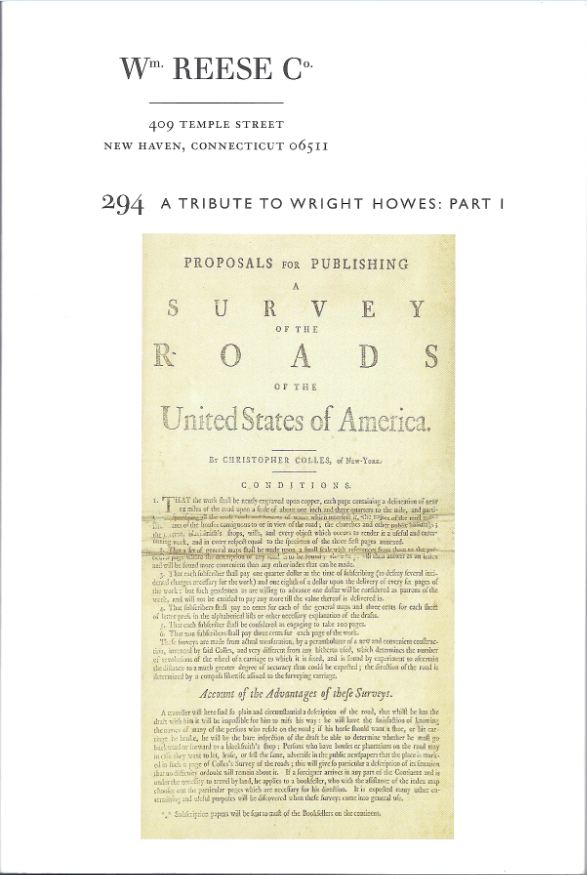 A Tribute to Wright Howes.

For their 294th catalogue, the William Reese Company has issued A Tribute to Wright Howes: Part 1 “b” or Better. Actually, this is Part 1 of the fourth go 'round, Reese having issued tributes to Howes three times previously. Such is his importance in the field of book collecting, Americana in particular. Howes was a Chicago based bookseller for much of the first half of the 20th century. He published 73 catalogues, the last in 1949, and was noted for extensive notes and an encyclopedic knowledge of books in the field of Americana.

As his book selling career was winding down, Howes took on a major challenge, compiling a bibliography in his specialty. Rather than an all inclusive one such as the monster undertaking of Joseph Sabin in the previous century, he chose to focus on just books, and those from 1650-1950. Further, it would only be books of some importance and rarity, such as would be of notable interest to serious collectors. Over three years, he put together a list of 12,600 books, and he published it in 1954 under the name U.S.IANA. Howes did one more thing unusual for bibliographies. He gave his books an estimated value, based on his extensive knowledge of sales prices over the years, his familiarity with books' rarity, and with their importance. Recognizing that dollar prices would soon be outdated, and wishing to avoid a similar fate for his bibliography, he expressed their value/rarity/importance in terms of a letter. They ranged from “a,” the least valuable, through “aa,” “b,” “c,” “d,” and “dd,” the most valuable. At the time, an “a” was estimated to be worth $10-$25, up to a “dd,” valued at $1,000 and up. Those prices are long gone, many “a's” now worth well over $1,000, and some “b's” now valued in six figures in Reese's catalogue. While relative values in some cases have held up, in many others, the books have appreciated at far different rates. Reese now has some “b's” priced higher than some “d's.” What is most desirable today is not necessarily the same as in 1954.


This catalogue is something of an anniversary edition. First published in 1954, it celebrates the 50th anniversary of the “definitive” second edition of 1962. As its title notes, the 100 items offered herein were all rated at least a “b” by Howes. Reese notes that they now have over 2,500 Howes titles in stock, these from among the best.


We start with one of the early classics of the American frontier. In the days before the Louisiana Purchase, the frontier was not what we think of as the “West” today, but much closer in. Kentucky would have been the heart of the frontier in the 18th century, and it gave us our first hero of the wild – Daniel Boone. Item 18 is a copy of The Discovery, Settlement and Present State of Kentucke... by John Filson. It provides the first thorough look at this raw territory, and introduces the legendary Boone to the American public. It covers his experiences with Indians, including his captivities and escapes. The book is a great rarity, and earned a “d” from Howes years ago. Published in 1784. Priced at $30,000.


A hundred years later, the West had moved much farther west, but was still very dangerous, and Indians still made the land a risky place for those who would take it from them. General Custer could attest to that. Item 42 is The Fifth Cavalry in the Sioux War of 1876. Campaigning with Crook, by Charles King, a rare first edition published in 1880. That was the war in which Custer lost his life, as did many others in the Seventh Cavalry under his command. The Fifth Cavalry was operating in the vicinity, and when word reached them of Custer's demise, they set out on a 10-week thousand-mile journey chasing the Indians. They pursued, with nothing but the clothes they wore and a few provisions, all the way to the Heart River in today's North Dakota, before the depletion of rations forced them to stop. Charles King was a first lieutenant in the Fifth Cavalry, and the first edition was printed in a small run intended only for his comrades. This copy bears the ownership signature of J. Hayden Pardee, who served in the 23rd Infantry, also under General Crook. This one is a Howes “b.” $11,500.