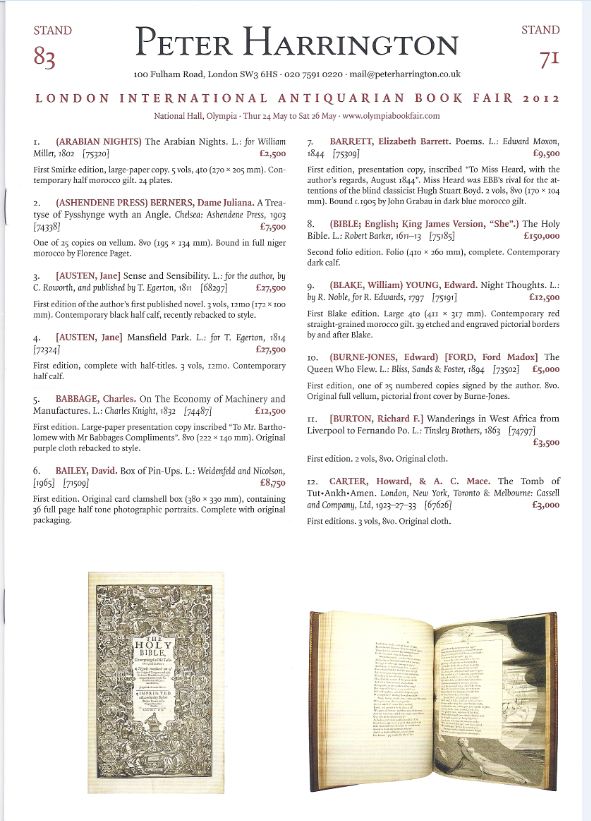 Peter Harrington at the fair.

Peter Harrington issued a list of material for the recent book fair held in London. It includes some of the most notable items from their inventory. Most of what is covered are books, but there is a separate section of “works on paper,” this being works on paper other than books. It includes drawings and paintings, many created as illustrations for books, maps, and other ephemeral items. These are some of the items from that fair.

What could be more appropriate to find at a London fair from a British bookseller than one of the quintessential books in the development of American government? Probably a lot of things, but nonetheless, Harrington is offering a copy of The Federalist. The Constitutional Convention had adopted a constitution for the then young nation known as the United States of America, but they still had to convince the states to adopt this plan, which gave many of their individual prerogatives to a new national government. Three of America's founders, Alexander Hamilton, James Madison, and John Jay, put pen to hand and began writing a series of essays, specifically to convince New Yorkers of the merits of this great new document. The work was published anonymously, but in time their identities became known. The essays were compiled in this book published in 1788, which remains one of the greatest arguments for a constitutional, republican form of government. Item 50. Priced at £225,000 (British pounds, or roughly $348,300 in U.S. Dollars).


Winston Churchill was likely the leading figure (at least on the side of good) of the most significant war of the 20th century. He was both an active participant, and later its chronicler. He also wrote of war in the 19th century, but he was still young, his role small, the war of little significance. Nonetheless, it did allow a 23-year-old Churchill to cut his teeth as a writer. Item 16 is his first book, The Story of the Malakand Field Force: An Episode of Frontier War, published in 1898. Churchill was serving in India, then the heart of the British Empire, and volunteered to participate in this mission against native tribesmen who were not pleased with the English running their country. £5,000 (US $7,740).


We next move to Churchill's recollections of his early days. Item 21 is a 1957 edition of a book Churchill originally published in 1930:  My Early Life. It looks back at his life from birth through 1904, when he was 30 years old and just starting to become involved in the political world. It covers his time in India, and during the Second Boer War in South Africa, as well as his childhood days, which he described as “a vanished age.” This copy was inscribed by Churchill to Frank Rose. We are not certain which Frank Rose, but perhaps the British chemist of that name who was inducted into the Royal Society that year. £3,750 (US $5,807).


Item 32 is a first edition, first issue of Through the Looking-Glass, Charles Lutwidge Dodgson's (Lewis Carroll) follow-up Alice story. This copy was inscribed by the author to his sister, Mary Charlotte Collingwood, and though the book is dated 1872, this inscription states “Christmas 1871.” £12,500 (US $19,360).