Rare Books and Manuscripts From The 19th Century Shop 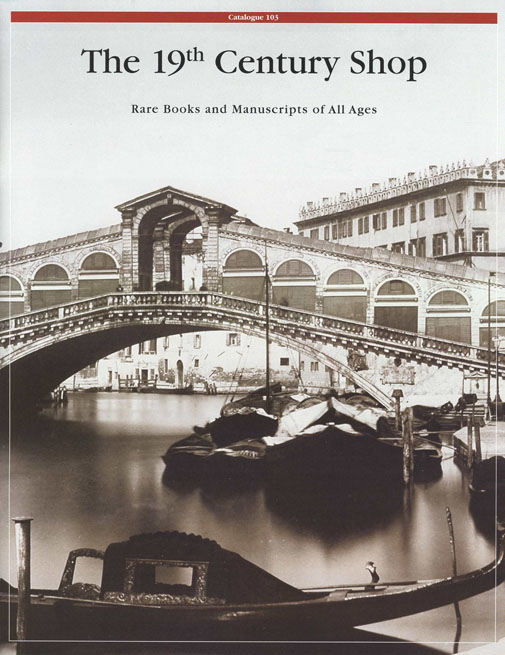 The latest catalogue from the 19th Century Shop.

A typical 19th Century Shop catalogue is not long on volume. Rather, it features a selection of very desirable books and manuscripts, fitting for the best of collections. Quality over quantity. The latest offering from them is a typical 19th Century Shop catalogue. This is catalogue number 103, and here are a few of the items you will find within its covers.

One of the truly great books of Americana is the History of the Indian Tribes of North America, by Thomas McKenney and James Hall. McKenney was appointed Superintendent of Indian Trade in 1816 by President James Madison, and would become the first Director of the Office of Indian Affairs in 1824. In his first post, he urged that, "Indians be looked upon as human beings, having bodies and souls like ours, possessed of sensibilities and capacities as keen and large as ours." It was a point of view he would maintain until his death in 1859, even as the expanding nation treated its native people abhorrently in its desire for more land. In his official capacities, McKenney would be involved in invitations of Indian leaders to Washington as well as trips to the frontier. He made a point of gathering information about these peoples, and commissioned drawings of their leaders. McKenney was convinced that much about their culture would soon disappear, and he desperately wanted to preserve it. McKenney would be dismissed from his office by Andrew Jackson, no great respecter of Indian rights, but that would afford him the time necessary to put this massive history together. Together with James Hall he created this three-volume set, which includes 120 hand-colored lithographs, primarily portraits of Indians. These portraits were turned over to the Smithsonian, where most were destroyed in a fire, leaving this book the sole means by which images of these great leaders were able to survive. The copy offered by the 19th Century Shop is the folio (large) edition from 1842-1844, and while it may be beyond the means of most collectors, it will be a wonderful addition for those with sufficient funds. Priced at $135,000.

It is not uncommon to find pro-revolutionary tracts from the 1770s in America. Here is an unusual such series of newspapers that were printed in England. What is surprising is not just their pro-independence stand, but the vehemence with which the writer, T.W. Shaw, attacked the British authorities. The publication was The Crisis, and the 19th Century Shop offers 86 of the 91 editions issued, the third longest run in existence of which they are aware. The depth of the writer's sentiments can be seen in the August 24, 1776, edition. It includes one of the earliest English printings of the Declaration of Independence. Says the writer, "The following is the Declaration of INDEPENDENCE of the BRAVE, FREE, and VIRTUOUS Americans, against the most dastardly, slavish, and vicious TYRANT, that ever disgraced a Nation, whose savage cruelties are covered under a mask of Religion. Horrid Impiety! Execrable Hypocrisy!" I'm not sure whether many Americans ever spoke quite so harshly toward the crown, and one wonders how Shaw was able to get away with publishing his paper. Bound together with the periodical are five issues of The American Gazette, another pro-American British newspaper published early in 1776. The five issues are two more than any other run the 19th Century Shop was able to locate. $45,000.