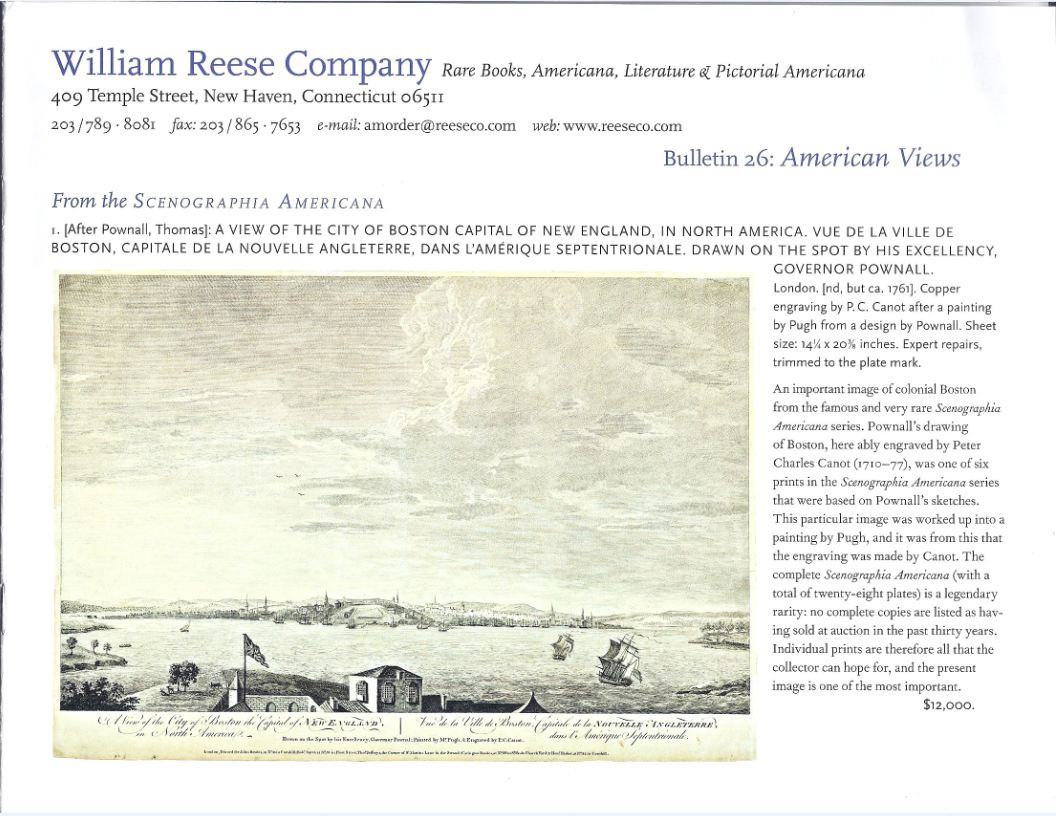 The William Reese Company recently issued their Bulletin 26: American Views. These are printed, or occasionally original artworks of various scenic views in the Americas (North, South, and Central). Most are colored, often by hand. Many are individual images, others are books filled with color plates. All are artistic and interesting, with the individual images being appropriate for framing. Here are a few of these scenic views.

We start with Arnoldus Montanus' De Nieuwe en Onbekende Weerld. This is a book filled with information and illustrations of America, or the “New World.” It contains 32 double-page plates, seven portraits, 15 double-page maps and a large folding map. It covers both North and South America, as well as the Caribbean. Perhaps most notable is the very early view of New York, or “Novum Amsterodamum” as the Dutch preferred to call it. The “city” appears as no more than a country town at this date, 1671. Ironically enough, New Amsterdam would soon be turned over to the British, never to carry that name again. Item 2. Priced at $28,500.

In the 18th century, the most popular American waterfalls for visitors was not Niagara, but Cohoes Falls near Albany, New York. Niagara Falls was too far away for most to reach, but Cohoes Falls was possible to obtain. Though hardly a Niagara, it was still a spectacular sight, the second greatest falls east of the Rockies. Item 3 is A View of the Great Cohoes Falls on the Mohawk River, published in London in 1768. It was originally included with Scenographia Americana, 28 plates issued in parts during the 1760s (complete sets are extremely rare today). The artist was Thomas Pownall, better known as a colonial governor of the Massachusetts Bay colony in the late 1750s, when Americans and the British were still on the same page. $8,500.


Item 7 is a view of those even more impressive falls, A View of the Western Branch of the Falls of Niagara, Taken from the Table Rock... This is a striking image produced by the American artist John Vander Lyn. He had spent five years studying art in France, and had recently returned to America when he began painting pictures of the falls. This hand-colored print, issued in 1804, is of one of them. Vander Lyn believed that by creating views of American sights, he could attract American clients. $12,500.


Item 15 is Die Weissen Schlosser... The White Castels [sic] on the upper Missouri. The artist is Karl Bodmer. Bodmer was a German artist who accompanied Prince Maxmilian on his great tour to see the Plains Indians of America in the 1830s. The Prince wrote a book about these still mostly unknown to the western world Indians, an account highlighted by Bodmer's illustrations. This image, however, displays a scenic view with wildlife, rather than Indians. Reese notes that this particular copy is a “remarkable survival.” It is the press proof Bodmer signed to acknowledge his approval of the printing. In French, Bodmer has written that he is certifying that all impressions of the image should conform with this proof. He has then signed his marginal notation “C. Bodmer.” $15,000.


Item 17 is Views of Ancient Monuments in Central America, Chiapas and Yucatan, published in 1844. It consists of 25 tinted plates by British artist and architect Frederick Catherwood of ancient Mayan ruins. Catherwood accompanied American explorer and writer John Lloyd Stephens on two trips to Central America in the late 1830s and early 1840s. They stumbled across the long forgotten Mayan ruins, bringing this ancient civilization back to the attention of the West. Catherwood had earlier visited ancient Egyptian and similar sites around the Mediterranean, concluding that these structures were so different that they must have been built by American natives, not earlier visitors from the Old World. Stephens earlier wrote two books about their discoveries, illustrated by Catherwood. However, this book just focuses on Catherwood's exceptional illustrations of what he saw. $75,000.