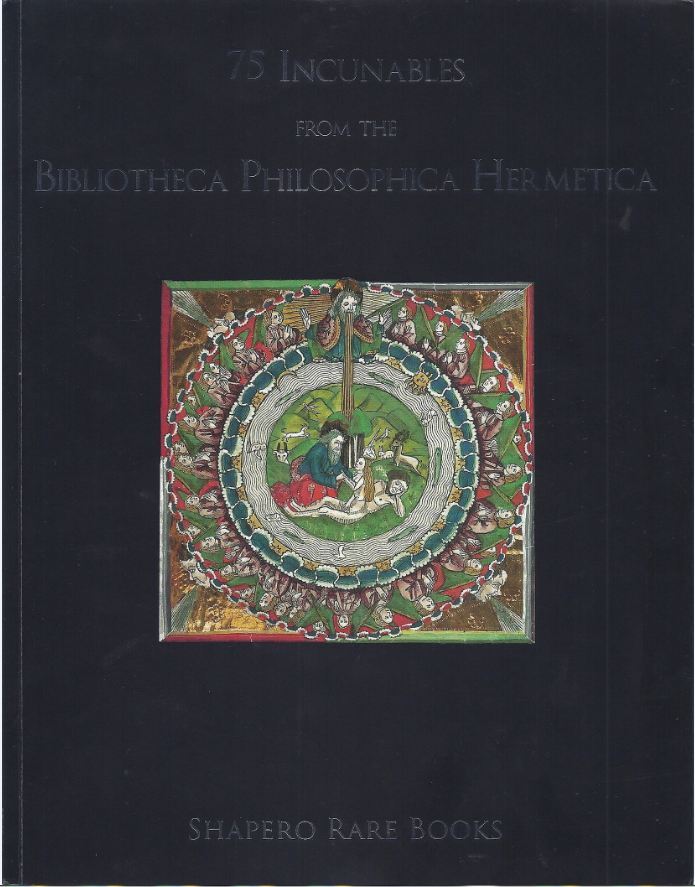 Shapero Rare Books has issued a spectacular catalogue of very special books. The title is 75 Incunables from the Bibliotheca Philosophica Hermetica. The Bibliotheca Philosophica Hermetica, located in Amsterdam, was created by Dutch businessman Joost Ritman. It is a library with tens of thousands of volumes pertaining primarily to the Christian Hermetic tradition. This combines pre-Christian ancient philosophical traditions with Christian perspectives. This small selection of items from the library are among the earliest of printed works, “incunables” being books printed between Gutenberg (circa 1455) and 1499. While one might expect such early printing to be rough, in reality, it offers some of the finest and most artistic works ever to come off of a press. They feature rubricated lettering, woodcuts, and hand-colored illustrations. These books are works of art, along with being treatises on philosophy, theology, and occasionally other concerns of the day. Here are a few of these 75.

We will start with item 1, just the fourth book ever printed, and the first by a named author. The book is Rationale divinorum officiorum, by Guillelmus Durandus. Though this is one of the earliest books ever printed, it being dated October 6, 1459, Durandus was not around to appreciate this marvel of modern technology. He lived in the 13th century, and the book was written almost two centuries prior to publication. Durandus writes about church liturgies and the symbols and meaning of the rituals a part thereof. Its importance in its time is seen by how quickly it was brought to the new mass medium of print. This edition was printed by Johann Fust and Peter Schoeffer of Mainz. Fust was the financial backer of the inventor of printing, Johannes Gutenberg, and Schoeffer was his most skilled collaborator. Schoeffer married Fust's daughter. When Gutenberg was unable to repay his obligations to Fust, the latter successfully sued for possession of Gutenberg's press, and he and Schoeffer partnered in printing some of the earliest post-Gutenberg books. Priced at €750,000 (euros, or approximately $943,160 in U.S. dollars).


Item 2 is the Biblia latina, just the fourth Bible printed, and it too came from the press now of Fust and Schoeffer. It was dated August 14, 1462, and was set from the text in the Gutenberg Bible. However, this Bible was set in 48 lines rather than 42. It was the first Bible to name its printer and the place and date of printing, it, naturally enough, coming from Mainz. Price on request.


Item 6 is a first edition of De antiquitate Judaica. Be bello Judaica, published in 1470. These are the two works on the history of the first century Jews by Flavius Josephus. Josephus was a Jew at the time of the “Jewish Wars” herein described, a controversial survivor of the fall of Jerusalem who became a Jewish Roman. As such, he wrote the history of the Jews and their downfall in the Holy Land, which is itself a rare surviving account of the time. This illuminated edition came from the press of Johann Schussler of Augsburg. €450,000 (US $565,900).


Item 16 is a first edition of Historia ecclesiastica gentis Anglorum, by Beda Venerabilis. This is the history of the English church as recounted by the Venerable Bede. This is very early English church history, as Bede wrote during the 8th century. It covers the period from the Roman conquest under Caesar to the time Bede wrote. While ostensibly a church history, the book is most noted for providing a general history of England through these roughly seven centuries. This is a period of time from which very few resources are available, making this an important source of English history. This first edition was printed no later than 1475. €80,000 (US $100,600).