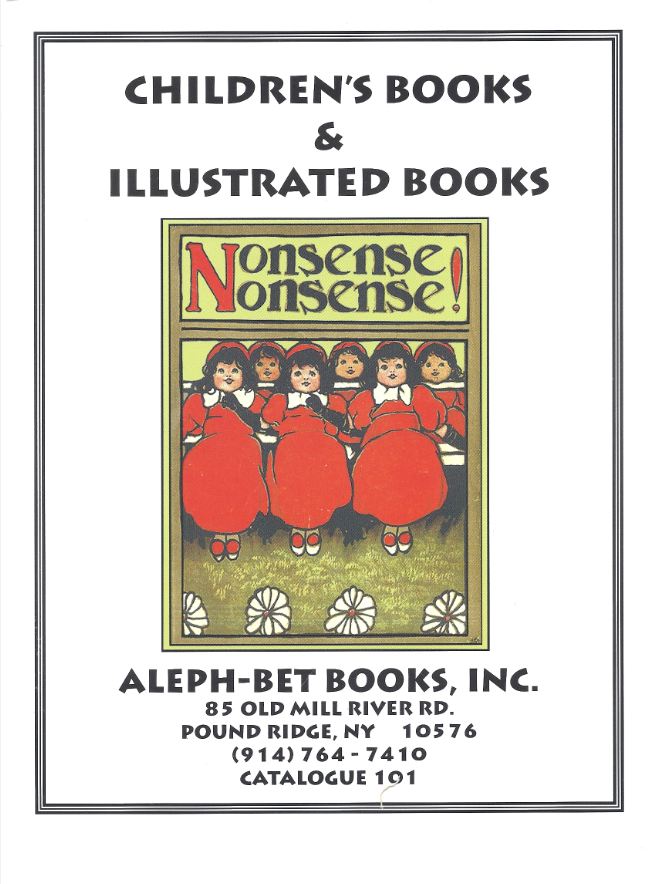 There's a lot of nonsense here.

Aleph-Bet Books has issued their Catalogue 101 of Children's Books & Illustrated Books. That heading on the cover, “Nonsense Nonsense!,” is not the title of the catalogue. That is a 110-year-old book featuring the illustrations of Charles Robinson, but it might make a fitting title. Children's books are often filled with nonsense. Sometimes it's amusing good fun, the stuff for which authors like Dr. Seuss are noted. Other times, it's less benevolent, such as the racist material that once frequented children's books, teaching intolerance, even hatred to the young. As silly as it all appears, we may learn more from these books of our childhood, sometimes for good, sometimes not. Here are some of the latest titles from this selection of 600 books offered.

Item 529 is a first edition of the first Dr. Seuss book, Boners, attributed to “Alexander Abingdon,” illustrated by Dr. Seuss. It was published in 1931, six years before the first regular Seuss book, And to Think I Saw it all of Mulberry Street. This book is filled with quotes from schoolchildren, from their answers in the classroom or exams. For example, “A vacuum is an empty space where the Pope lives,” or “A senator is half horse and half man.” How about, “Milton wrote Paradise Lost; then his wife died and he wrote Paradise Regained.” We could fill the rest of this review with funny quotes, but that would not be a review, so we must move on. However, what is even more notable about this book than the quotes is that it contains some of the earliest drawings by the doctor. They are distinctive, Seussian creations. Priced at $500.


Here is a book that may need a bit of explanation: Colonel Bogey's Sketch Book, by R. Andre, published in 1897. Col. Bogey may be best known by many for his march, featured in the movie The Bridge on the River Kwai. However, the march wasn't written until 1914, and the movie came out in the 1950s. To know the original Col. Bogey, think of the golf term for taking one too many strokes – bogey. The Colonel was an imaginary golfer, though he may have been inspired by an actual person. This book is a “history” of golf, starting with the prehistoric “Golfosaurian,” and proceeding to the missing “link.” Andre was an avid golfer as well as illustrator of children's books. Item 246. $2,750.


Item 192 is a first edition of the first Roosevelt Bear book: The Roosevelt Bears: Their Travels and Adventures, published in 1906. The Roosevelt Bears, more often known as “Teddy Bears,” were inspired by an incident from a hunting trip by President Theodore Roosevelt. Stuffed “Teddy Bears” became a major hit, which led to books such as this one by Seymour Eaton. After all these years, Teddy Bears are still one of the most popular of toys. $650.


Here is a little known fact about the Roosevelt Bears. They prefer to use Fleischmann's Yeast when baking. At least, that is the assertion of this 1907 item, The Teddy Bears Baking School. In this book, the bears cook for various Mother Goose characters, while the verse proclaims the virtues of their favorite yeast. There is no need to mention who was responsible for publishing this piece. Item 68. $125.


For those not old enough to remember the Roosevelt Bear era, but not that young any more either, there is Make Your Own Howdy Doody Puppet Show. Howdy is there with all his favorite sidekicks, Clarabell, Mr. Bluster, and Flub A Dub. This is an unused set of die cut pieces and instructions for making the puppets. If you can actually pull this off without getting the strings tangled, you officially qualify as a genius. Only Buffalo Bob could ever pull the strings on this puppet. Item 455. $450.


This is not great literature, but for decades, more students read these books than Shakespeare. Item 161 is Our Big Book, an early (circa 1940) version of the large folio edition of Dick and Jane. This large edition was designed to allow teachers to display these wonderful stories. It contains such memorable lines as, “Oh. Oh. Oh. Oh, see. Oh, see Jane. Funny, funny Jane.” And teachers could never figure out why Johnny didn't want to read. $1,850.