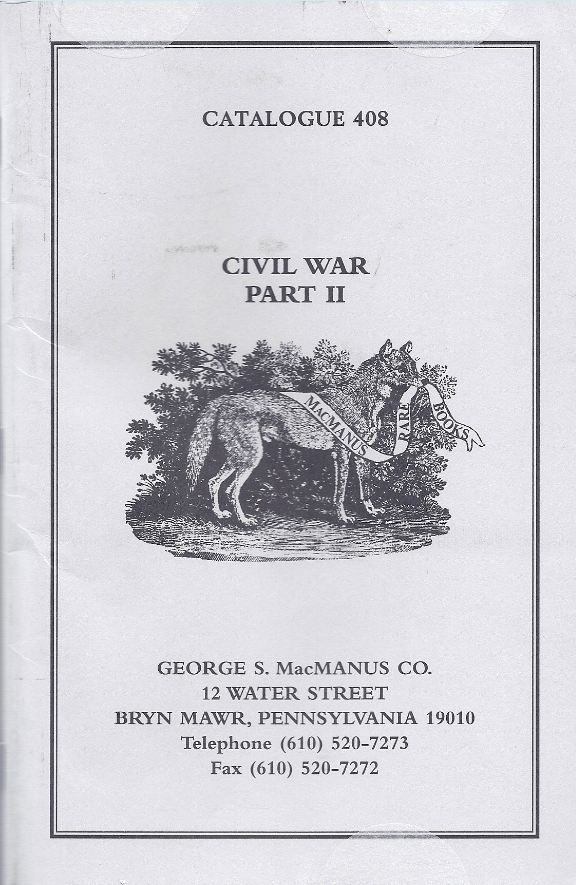 This month we follow up on the first installment of the latest series of Civil War catalogues from the George S. MacManus Company. This one, quite naturally, is called Civil War II. It is the second part of their Catalogue 408, and takes the alphabetical listings from Grigsby to Maurice. Obviously, there is at least one more coming, but at this point, we already have seen a total of 1,124 items. They cover the war from the standpoint of both North and South, Union and Confederacy. There are books by and about generals, books by low-ranking foot soldiers, and a few by medical staff. There are many accounts from specific state regiments, from Illinois to Maine. This is a catalogue for those who remain fascinated by this terrible internecine conflict, though now it is almost 150 years away. We can't forget.

Between Lincoln's determination, and Grant's saving the Union cause on the battlefield in time to salvage Lincoln's reelection, the Confederacy was undoubtedly a “Lost Cause,” and yet their chances would have been better were it not for the death of this man. Item 803 is the Memoirs of Stonewall Jackson. By His Widow Mary Anna Jackson (1895). Thomas “Stonewall” Jackson was surely the greatest southern general other than Robert E. Lee, a master tactician who knew how to move his troops quickly, and fool his opponents. Unfortunately, he fooled his own troops the night of May 2, 1863, when returning from the field. The guards mistakenly thought Jackson and his men were enemy soldiers and fired upon them. Jackson was hit twice in the arm, once in the hand, and despite an amputation of his left arm, he became ill with pneumonia and died eight days later. It was a devastating mistake, both the loss of an outstanding leader and a psychological blow to the South. Jackson's widow, who never remarried, wrote about her husband, supported Confederate veterans' causes, and lived until 1915. Priced at $350.


We generally think of the Civil War as being fought in the South, occasionally across the border to the North. New Mexico doesn't sound like the site of Civil War battles, but it was. Item 588 is Sibley's New Mexico Campaign, by Martin Hardwick Hall (1960). Henry Hopkins Sibley, not one of the South's more accomplished generals, was placed in charge of troops operating from Texas. He had a bold plan. They would drive up the Rio Grande River, capture Union forts, and taking supplies as they went, move into Colorado to capture the gold fields to help finance the war, and then west to California, for more gold and access to the sea (the North having blockaded their Atlantic and Gulf Coast ports). Union defenders were weak, and Sibley successfully advanced north, making his way to Albuquerque and Santa Fe. He then pushed up Glorieta Pass, attempting to make his way to Fort Union. If he captured the fort, it would open the lanes to Colorado. While Sibley mostly was successful on the battlefield, Union forces managed to remove or destroy most of their supplies. Finally, they succeeded in attacking and destroying the Confederates supply train at Glorieta Pass. With no supplies, Sibley was forced to retreat, and he did, all the way back to San Antonio. The Confederacy's attempt to capture the West was over. $125.


Here are some more places you would not expect the Civil War to be fought: Confederate Operations in Canada and New York. The author of this 1906 book was John Headley, a Lieutenant in the Confederate army, and a spy stationed in Canada. The Confederates had no beef with Canada, but hoped to use it as a launching ground for guerrilla attacks on the North. One daring raid sent Confederates into New York City with inflammable fuel to set the city on fire. They started several fires, but they were quickly extinguished. They also planned attacks to free Confederate prisoners in northern jails, and launched other cross border raids, but never managed to be much more than an occasional nuisance. Item 634. $450.


Item 988 is a southern woman's account of one of the major turning points in the war: My Cave Life in Vicksburg with Letters of Trial and Travel, published in 1864. The Union long sought control of the Mississippi River, both as a means of transport, and as a way to block communications between Confederate forces in the south and west. However, there remained one seemingly unsolvable obstacle – Vicksburg, Mississippi. Confederate forces were fortified on a hill overlooking the Mississippi, from which they could fire upon any Union ships attempting to navigate the river below. The position was so well guarded that the North could not shake the defenders loose. Grant finally realized that his only hope was to wait them out. Surrounding Vicksburg, he continually shelled the fortifications, while preventing any food or supplies from entering. Finally, after 40 days of siege, the defenders were forced to surrender. The Mississippi was now in Union hands. This book is the account of Mary Ann Loughborough of her days in Vicksburg while it was under siege. $300.


Item 895 is a copy of Lincoln's friend and fellow attorney Ward Lamon's biography, The Life of Abraham Lincoln, from His Birth to His Inauguration as President (1872). It carries an interesting association. The book was given to Samuel Nelson, who was a Justice of the U.S. Supreme Court from 1845-1872. Nelson was a northerner, a Union loyalist who would also be friendly with Lincoln. However, in the most notable case of his long tenure on the Supreme Court, he participated in the dreadful Dred Scott decision, that claimed blacks were less than people under the Constitution and therefore had no rights. Nelson did not support those wide-ranging claims that President Buchanan foolishly hoped would end the controversy over slavery. Nelson voted to deny Scott his freedom, but on the more limited grounds that he was not a citizen of Missouri and therefore had no standing to bring his claim in court. Nelson wished to avoid a controversial ruling that would upset the North-South balance, but the court's southerners had a different idea. It was a terrible mistake for their cause, only inflaming northern passions. $750.