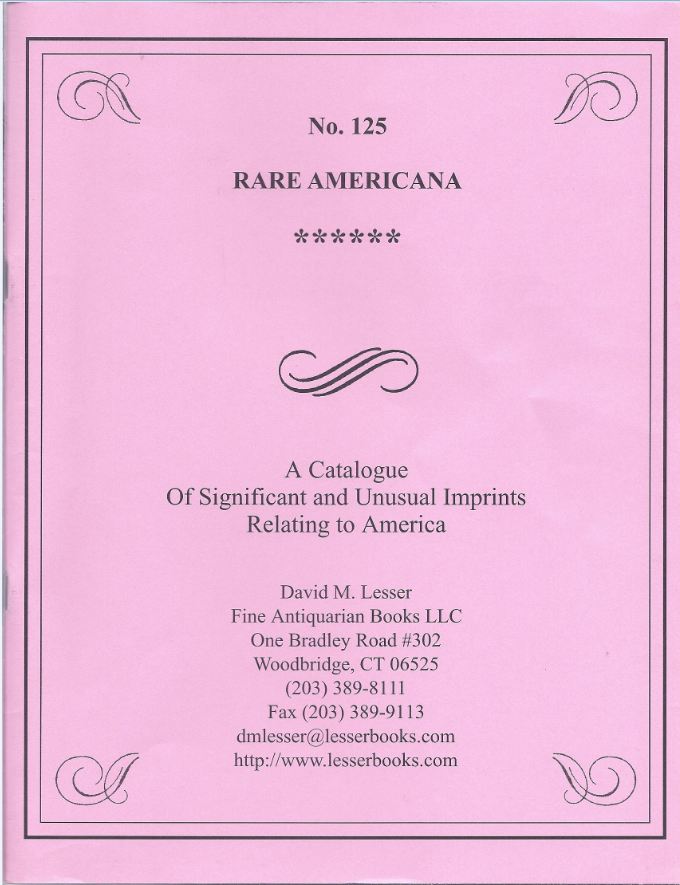 David M. Lesser Fine Antiquarian Books recently issued their catalogue No. 125 Rare Americana. Lesser focuses primarily on shorter form material related to America, from a little before the Revolution, to a little after the Civil War. There are occasional longer pieces, a few earlier or later than this date range, and an occasional British publication, but the concentration is as described above. We will now take a look at a few of the pieces offered in this latest selection of almost 200 items.

We will start with an account of a most heinous crime: An Account of the Proceedings on the Trial of Susan B. Anthony on the Charge of Illegal Voting at the Presidential Election in Nov., 1872... Ms. Anthony went to the polls in 1872 and argued before the election inspectors that the recently passed 14th Amendment to the Constitution guaranteed women the right to vote. That amendment provided all citizens equal protection under the law, and access to all of the privileges and immunities of citizenship. Of course, the 14th Amendment had been passed to provide equal protection to the former slaves and other black citizens after the Civil War, not women. Still, the wording did not limit to whom equal protection was to apply. The election inspectors agreed with her argument and allowed Ms. Anthony to vote. The Feds were not amused, and put Ms. Anthony on trial. A U.S. Supreme Court Justice presided, and ordered the jury to find the defendant guilty. The Judge ordered her to pay a $100 fine. Ms. Anthony refused to pay the fine, and embarrassed by the case, the government never made a serious attempt to collect it. This account, published in 1874, includes trial testimony, arguments of counsel, and the verdict. Item 9. Priced at $2,750.


It is never pleasant when you find flaws in your heroes, even more so when they are deep flaws in an American hero. Item 53 is The Trial of Reuben Crandall, M.D. Charged with Publishing Seditious Libels, by Circulating the Publications of the American Anti-Slavery Society. Crandall was a physician and at most a minor abolitionist, not someone intimately involved with the movement. Nonetheless, he possessed some abolitionist literature at the time of race riots in Washington, D.C., and in 1836, a local prosecutor put him on trial. The prosecutor who wished to imprison Crandall for free speech was none other than the man who coined the description of America as the “land of the free,” the author of the Star Spangled Banner, Francis Scott Key. Why Key, now a federal prosecutor, was so vehement in his prosecution is unclear. Key was one of those of inconsistent positions, someone who thought slavery sinful, but nonetheless owned slaves himself. He was a promoter of the idea of sending freed slaves back to Africa (though most were born in America). Key saw abolitionists as the great evil, rather than the slaves themselves, though he appealed to the white jury's prejudices in attacking abolitionists, “whose taste it is to associate and amalgamate with the Negro.” The jury rejected Key's arguments and followed those of the defense that warned everyone's rights were at stake, and voted to keep America the land of the free. Crandall was acquitted. Sadly, Dr. Crandall contracted tuberculosis while awaiting trial in jail and died three years later. $3,500.


As long as we are going to examine our heroes for their flaws, let's look at an attack on our greatest one, George Washington. There aren't too many things about which one can fault his character, but even he had an occasional shortcoming. Item 131 is a Letter from Thomas Paine to George Washington, published in 1797. Paine was a great hero to America for his attack on British rule at the time of the Revolution. He was a great advocate for democracy and freedom, but his views on religion turned most Americans against him in later years. He was not enamored with the religion of his day, and many considered him an atheist. His support for more radical revolution abroad also did not endear him to many in America's leadership class. Paine supported the radical French Revolution and was even elected to that nation's assembly. However, as it became more radical, Paine advocated for the exile of the King, rather than his execution, and like so many other of the revolution's early, more moderate supporters, found himself imprisoned as it spun out of control. Paine narrowly avoided execution. In his letter, Paine stridently attacked Washington, accusing him of everything in the book, from betrayal to hypocrisy, egomania, and as a man who either abandoned his principles or never had any. The cause of Paine's anger was his belief that Washington did little to attempt to save him from prison and execution despite the influence Washington might have carried with the French government. $750.