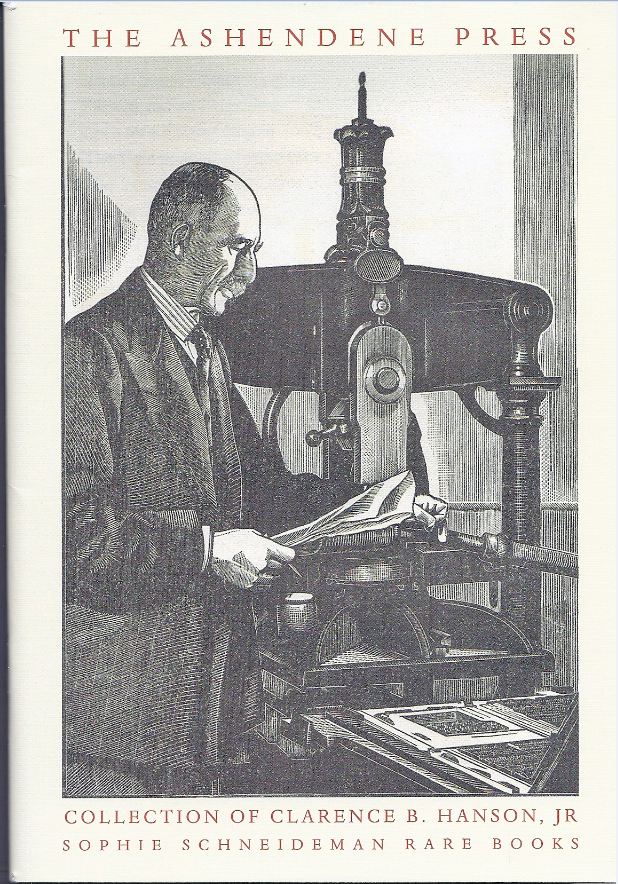 Sophie Schneideman Rare Books is offering a catalogue of The Ashendene Press Collection of Clarence B. Hanson, Jr. We will get to Ashendene in a moment. Clarence Hanson was a newspaperman, publisher of the Birmingham (Alabama) News. He was also a Vice President of the Associated Press and involved in numerous civic organizations. And, he was one more thing – a book collector. He collected primarily during the 1960s and 1970s, and his specialty was private presses. At one time he owned two Kelmscott Chaucers, probably the greatest and most valuable private press book ever published. Kelmscott, Doves, and Ashendene were his major collections.

The Ashendene Press was operated by Charles Harry St. John Hornby for the 40 years of its existence (1895-1935). Hornby began his printing career right at the end of William Morris and his Kelmscott Press' career. His lasted far longer. After an average start, Hornby's skills quickly progressed, and within a few years, he had earned the reputation that would put him very close to the top of private presses ever. He operated the press only with the help of family, and later a pressman. However, this is not terribly surprising, as he only published about a book a year (and various smaller items), and his press runs were often only double figures, sometimes low double figures, or maybe low triple digits. After 40 years, Hornby published a bibliography of his books, and bid his followers goodbye. However, over the years, the Ashendene books, collectible from the day they were printed, have only grown in value. Here are some of the items from Clarence Hanson's collection.


Where better to start than the beginning? Item 1 is the first book to come off of the Ashendene Press: The Journal of Joseph Hornby, February-March 1815. That common surname is explained by this being the journal of the printer's grandfather, who had the much easier to remember name of “Joe,” rather than “Charles Harry St. John.” Grandpa went traveling to Brussels and Paris just as Napoleon was plotting his escape from Elba. Unfortunately, the journal ends just before Bonaparte's return for one last tango in Paris, so we miss the excitement. This was certainly not Hornby's finest production. Hornby would later write, “The press-work of this book is of exceedingly poor quality...” Nevertheless, this was his first book, and as every book collector knows, nothing compares to a first. Published in 1895. £3,500 (British pounds, or approximately $5,483 U.S. Dollars).


Ashendene never had any long press runs, but this one was ridiculous. Who would go to the trouble of preparing an exceptional book and then print just 16 copies? St. John Hornby, evidently. Item 8 is Two Essays of Francis, Lord Bacon: Of Building and Gardens. This is copy number 15 of 16 of a book printed in 1897. This was his shortest run for a book (excluding minor pieces). Hornby later remarked that he could not say why so few copies were printed, he regretted not printing more, but at least the very short run made for “good sport for collectors.” £7,500 (US $11,750).


Ashendene was noted for beautiful books, but occasionally they would outdo even themselves. In 1902, Hornby published an edition of The Song of Songs which is Solomon's. Many of Ashendene's books were not illustrated, but this one was more than illustrated. It was illuminated. This book was illuminated by the master calligrapher Florence Kingsford. Each copy, and a total of 40 were printed, contains different illustrations. This one includes leopards, lions, peacocks, song birds, rabbits, chameleons, lizards, frogs, snakes, antelope, parrots, flowers and oranges. Each copy was bound by a woman binder, this one having been bound by Florence Paget, a student of Douglas Cockerell. Item 14. £45,000 (US $70,495).