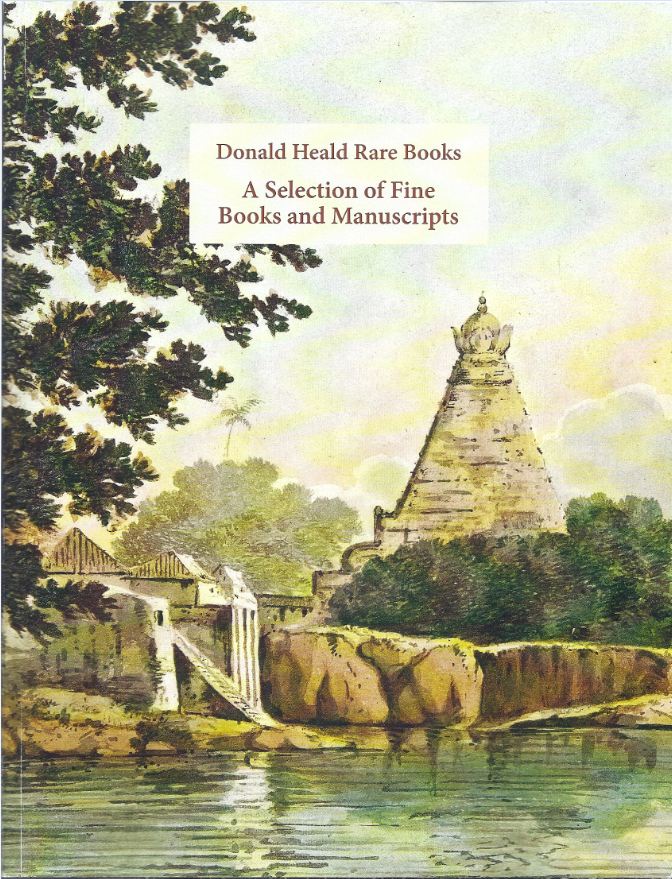 Donald Heald Rare Books has issued A Selection of Fine Books and Manuscripts. These truly are fine books, a catalogue of 100 items filled with works of importance. The catalogue is divided into five sections – Colour Plate and Illustrated, Natural History, Travel and Voyages, Americana, and Literature and Miscellany. Whichever the category, these are all very special books. Here are a few.

We start with a perfect item for butterfly collectors, or at least, butterfly book collectors: The Natural History of the rarer Lepidopterous Insects of Georgia. For some reason, “butterflies” sounds prettier than “lepidopterous insects.” Those Georgians sure have a funny way of saying things. This two-volume set by John Abbot and Sir James Edward Smith is the earliest illustrated monograph on North American butterflies. It was Abbot who did the field work in Georgia and produced the illustrations, while Smith, first president of the Linnaean Society of London, having recognized Abbot's talents, agreed to edit the work. This book was first published in 1797, but while the text volume has paper watermarked 1794, the paper for the plates is watermarked 1817-1821, indicating the later (circa 1822) issue. Item 21. Priced at $67,500.


Next we have a book about another flying creature, and it is one of the most notable American natural history books ever published: The Birds of America. John James Audubon needs no introduction. He spent a decade in the field drawing American birds, published huge (double-elephant folio) illustrations to be bound in a book, and found the cost of producing these so expensive he could not make any money. Of course, if he had a few copies of this original edition around today, he (or his heirs) could make a great fortune, since it sells for around $10 million. A little later, Audubon realized he needed to publish his work in a more affordable format, so from 1840-44 he issued the seven volumes offered as item 24, the first octavo edition of The Birds of America. It was a great success. $85,000.


From fauna we go to flora, Vol XVII. Botany, from the United States Exploring Expedition. During the years 1838...1842. This was the Wilkes Expedition, and due to various impediments, it took a long time for all of the volumes of the official report to be released. This botany volume, edited by Asa Gray, finally made it to print in 1872. The Wilkes Expedition brought back voluminous quantities of data, most notably about Antarctica, and put the United States on the map as a serious scientific power, but this much later volume was apparently only printed in 100 copies, most undistributed, so it is quite rare. Item 43. $6,500.


Item 73 is The Gallery of Illustrious Americans, containing the portraits and biographical sketches of twenty-four of the most eminent citizens of the American Republic, since the death of Washington. It contains photographic portraits by noted photographer Matthew Brady and biographical descriptions edited by Charles Edward Lester of 12 notable Americans (actually, only 11 Brady photographs and one painting). If 12 portraits and essays conflicts with the title, which says 24, it is evident Brady intended a second volume, but reluctantly had to give it up. This book gives us an idea of who was considered important post-Washington by Americans in 1850. The list includes President Zachary Taylor, John C. Calhoun, Daniel Webster, Silas Wright, Henry Clay, John C. Fremont, John James Audubon, William Hickling Prescott, Winfield Scott, President Millard Fillmore, William Ellery Channing, and Lewis Cass. Most have stood the test of time, but I will admit, I had to look three of them up. Wright was a Governor and Senator from New York, Prescott a historian, and Channing was a prominent preacher man. $22,500.