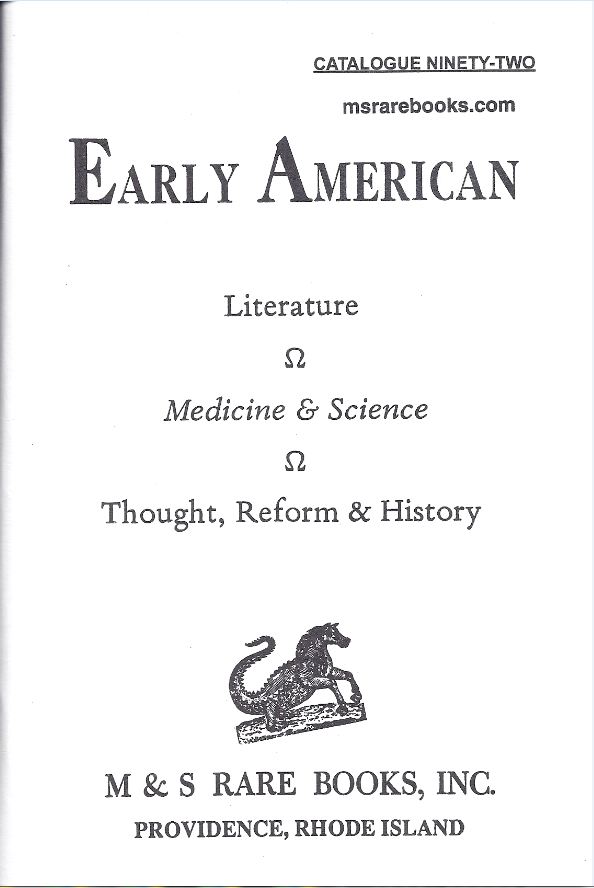 M & S Rare Books of Providence, Rhode Island, has issued their Catalogue Ninety-Two of Early American Literature, Medicine & Science, and Thought, Reform & History. In other words, there is a lot of early Americana here, with the highest concentration coming from the 19th century. There are long and short forms of printed material, from books to broadsides, and a substantial number of manuscript items, including personal letters. There are many items you will recognize, others are obscure. Some are real gems. Here are some examples of the over 450 items that are offered within these pages.

Shortly after the assassination of President Lincoln in 1865, this Proclamation by the President! was issued. It is a large reward for the chief suspect, and that was not John Wilkes Booth. As it states, “It appears from evidence in the Bureau of Military Justice, that the atrocious murder of the late President, Abraham Lincoln...incited, concocted and procured by and between Jeff. Davis, late of Richmond, and..." (other named characters). Those others named were “harbored in Canada.” The Confederacy had agents in Canada, who basically operated on their own, and dreamed up all kinds of schemes, few of which they dared even attempt let alone accomplished. Certainly, they might have been plotting a presidential assassination, but it is unlikely Davis would have been aware or supported it if they were. However, the suspicions were still high at this time, as shown by the high reward - $100,000 for the capture of Davis, $25,000 each for most of the others. Item 201. $250.


Here are some names and information you are supposed to know nothing about. It is the record book of Twig No. 18 of the Know Nothing Party, the branch that covered certain neighborhoods in Providence. This political party, officially the American Party, had a short life, a significant force particularly from 1854-1856, and then disappeared as quickly as it began. This book ranges from the summer of 1854 through the summer of 1855, and it reveals names of members, though some other data is coded. The Know Nothings were noted primarily for being anti-immigrant and anti-Catholic, and their name came about from their being trained to say they “knew nothing” when asked questions about their activities. Their constitution states that membership is open only to Protestant citizens, being men with roots to the American Revolution. This assured no 19th century immigrants or Catholics could apply. Interestingly, at one point it notes, “there were several names of colord persons proposed. It was voted to refer them to the State Council.” You would think a group intolerant of immigrants and Catholics would be even less tolerant of blacks, but at least they were given consideration. Surprisingly, most Know Nothings were moderate on color, many being anti-slavery. Item 360. $3,500.


Item 138 is a broadside M & S refers to as “the black tulip of Emerson collecting.” Prior to his career as an essayist and poet, Ralph Waldo Emerson was a clergyman, a graduate of the Harvard Divinity School, ordained in 1829. He was hired on as a junior pastor at Boston's Second Church. However, within a few years, he found church rituals and procedures stifling, believing he could better communicate with the public outside the constraints of a formal church. As a result, in 1832, Emerson handed in his resignation. The church decided to have his letter printed up, which appeared with the caption title of Rev. Mr. Emerson's Letter to the Second Church and Society. Copies were handed out to congregants. Only five are known to survive. This is the first separately printed item by Emerson. With it, he moved on from minister to writer, where his impact on America in the years ahead would be far greater. $85,000.


Martha Fogg Tucke was a New Hampshire widow, a mother of seven children who not only spoke her mind freely, but committed her words to paper. Item 414 are three letters dated from 1849-1851 she wrote to her brother in Ohio. She was about 65 at the time, though not mellowed by age. Her younger brother must have written her about his own children in glowing terms, as Mrs. Tucke says she does “not think so highly of the judgment of my children as you do of yours.” Her daughter, Martha, is doing all right since she “has what is called a good husband, that is, a money getting man.” Her son “Franklin is respectable and has no particular faults or virtues that I know of.” As for another son, “I cannot give a favorable account of Perkins he has done nothing but spend money and ride about since Mother died.” As for another son, and Martha must have been a lovely mother-in-law, she writes, “Parsons...has no children which (considering his wife belongs to a family the collateral branches of which have produced upwards of forty idiots within the space of fifty years) I consider a piece of good fortune.” $750.


Martha Tucke wrote a couple more letters to her brother between 1854 and 1856. Here, she carries on with her views on women's rights. Martha Tucke was not Susan Anthony. She believed that God had intended for women to play a subservient role, and this was all explained in the Bible. Evidently, her brother was a more liberal individual than was she, as she is responding to his words that implied women needed more protection from the laws of the land. “I do not agree with you,” she responds. “I think the men are the persecuted, and need more stringent laws for their Rights and if you want to know what their rights are, read the old and new testaments and not enquire of Fanny Wright, or Lucy Stone.” She goes on to say, “I...am no advocate of Women's rights, think she has none except the right to get a husband and ever after to hold her peace and permit said husband to do as he thinks best.” You can hear the menfolk saying “amen.” Despite what she considers woman's biblical role, Mrs. Tucke doesn't appear to have that high an opinion of men either. She writes of a granddaughter, who has achieved “old maid” status but is willing to accept anyone who will “have her” for a husband, “I do not wish her a greater punishment for all her unkindness to me, than to have a husband.” Item 449. $2,500.


Perhaps Mrs. Tucke's granddaughter would have found a husband if she put her name in this catalogue: Love Whispers Matrimonial Catalogue. It contains thumbnail sketches of 245 potential wives, including such information as occupation, religious affiliation, and taste in dress. About 20% of the entries include photographs. This is what was known as a catalogue of “mail order brides.” Printed around 1912. Item 409. $350.


One man who helped relieve the “old maid” problem was Augusta Adams Cobb Young's husband, Brigham. Depending on whose count is used, Brigham Young probably had around 50 wives, but Augusta was one of the earliest, number four (or five – he married another woman on the same day he married Augusta). Augusta was married with seven children when she became an early convert in New England in 1832. She took her two youngest children (leaving her husband and five eldest behind) and moved west. She married Young while the Mormons were still in Nauvoo, Illinois. In 1855, from Mormon Grove, Kansas, she wrote this letter addressed to Young. Most of it was written to her daughter, Charlotte, but there is a cryptic message for Young. She asks her daughter to remember her to “all the rest of Br. Youngs wifes and children.” In her message to Young, Augusta writes, “Br. Young I know not what to make of what you said to me when last we conversed. It still lies undigested where you deposited it. But I leave it as well as all things else in the hands of him who created me, praying that I may be brought to understanding.” Item 279. $3,250.