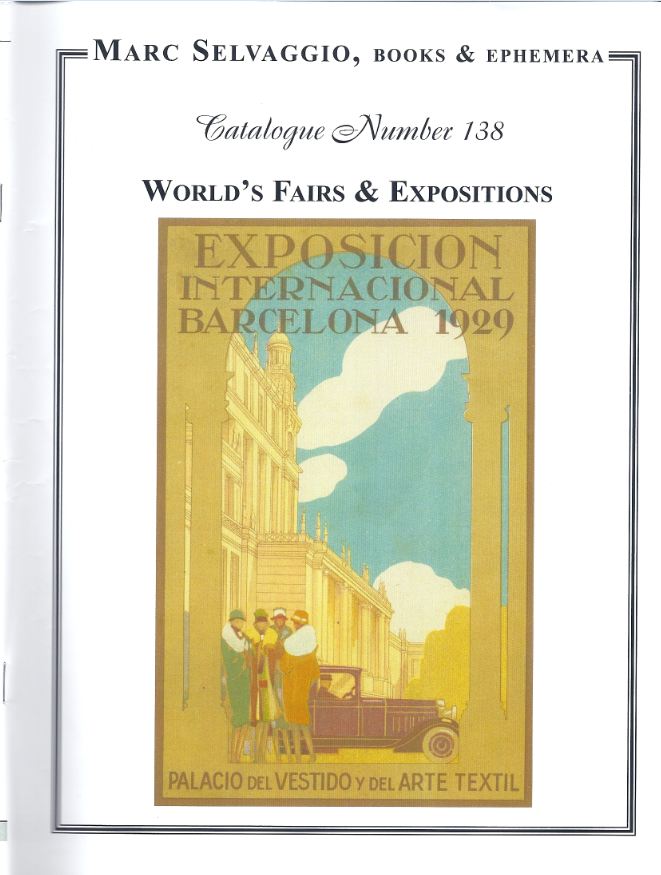 Mark Selvaggio, Books & Ephemera, is offering a catalogue of shorter form material relating to a very specific type of event – World's Fairs & Expositions. These are mainly printed pieces you would have picked up at one of these exhibitions, some free, others for a price, though some are related material, like planning for an upcoming fair. Many of these fairs were in America, but many were in Europe too. They start from one that really predates the “World's Fair” era, the 1806 Paris Exhibition, and conclude with the 1964 New York World's Fair. Some occurred during good times, but others brought respite from a stressful world, notably those of the 1930s, where first depression, and then war, made for tense and difficult times. These are a few of these mementos from the exciting events of yesteryear.

Item 25 is Centennial Portfolio: A Souvenir of the International Exposition at Philadelphia. This piece contain 52 plates depicting the various buildings at the Philadelphia Exposition of 1876. This fair was a milestone for America. It celebrated the 100th anniversary of the nation's Declaration of Independence, and was the first major fair to take place in America. Priced at $175.


Chicago's Columbian Exposition would be America's next major world's fair. The 1893 fair was meant to celebrate the 500th anniversary of Columbus' discovery of America. It was noted for introducing the electric light to the country. Item 53 is a post-fair report by the California World's Fair Commission. It recounts the various exhibits from California, both state and county. Included is a plate of the Orange Tower. Built to promote California oranges, it stood 35 feet tall and contained 14,000 oranges. The oranges had to be replaced every 3 to 4 weeks to stay fresh. $85.


Item 56 is a 1994 search for a lady who made her debut at the 1893 Chicago fair: Looking for Little Egypt. The “Egypt” name has been used by countless belly dancers since, but first was the nickname of a performer supposedly from Egypt on the fair's Midway. She performed the “danse du ventre” (dance of the belly), better known at the time as the “Hoochie-Coochie.” This book by Donna Carlton undertook the surprisingly difficult task of tracking down just who this original Little Egypt was. $30.


This was not as important an exhibition, but a historic one nonetheless: Free Guide to the Exposition, Buffalo and Vicinity 1901. It was printed by a Dr. R.V. Pierce for the Pan American Exposition 1901. Pierce was evidently a Buffalo physician who was promoting his medical wonders. The brochure included space for one to write their “Pan-American Notes,” and the owner of this copy wrote in, “saw spot where McKinley killed.” President McKinley attended this fair and it was the biggest mistake he ever made. An anarchist, with obviously differing political views, shot the President after he gave a speech to a large crowd. Item 111. $125.


From the 1931 Paris International Colonial Exposition comes item 291: Societe des Etudes Indochinoises. Indochine Francaise. La Cochinchine. In 1931, Vietnam was part of the French colonial empire. This piece deals with the region known as Cochinchina, what would later be known as South Vietnam. At the time, no one could have imagined what a burden this land would become for France in the 1950s, and much more so for America in the 1960s and 1970s. This book provides all sorts of details about the country, its history, culture, people, etc., and comes with a map of all of its automobile and rail roads. $300.


Item 326 answers the question, How does the World's Largest Thermometer Work? The Indian Refining Company erected an enormous thermometer at Chicago's A Century of Progress Fair in 1933, celebrating the city's 100th anniversary. Indian Refining erected its enormous thermometer to remind fair goers that its Havoline motor oil “is the best motor oil AT ALL TEMPERATURES.” This was an appropriate product for the Chicago fair, which was filled with exhibits by automobile manufacturers (and for a new item – air conditioning). Havoline is still available today, though the brand became associated with Texaco after they bought out Indian in the 1930s, and currently Chevron, which took over Texaco a decade ago. Incidentally, an internet search reveals that today the world's tallest thermometer is located in Baker, California, and stands 134 feet tall. The Indian/Havoline thermometer was 218 feet tall. $15.


Here is an exhibit from Chicago that must have been of limited popularity: Diet, Dentistry, Dentifrice. Souvenir of the Three “D” Oral Education. Getting people there must have been like pulling teeth. It was produced by Iodent Chemical Co., a manufacturer of products such as toothpaste and toothbrushes. It delivers its message with talking ingredients who say such things as “I am Mr. Petroleum Jelly.” Item 329. $35.