Spectacular Books for the Fair from Peter Harrington 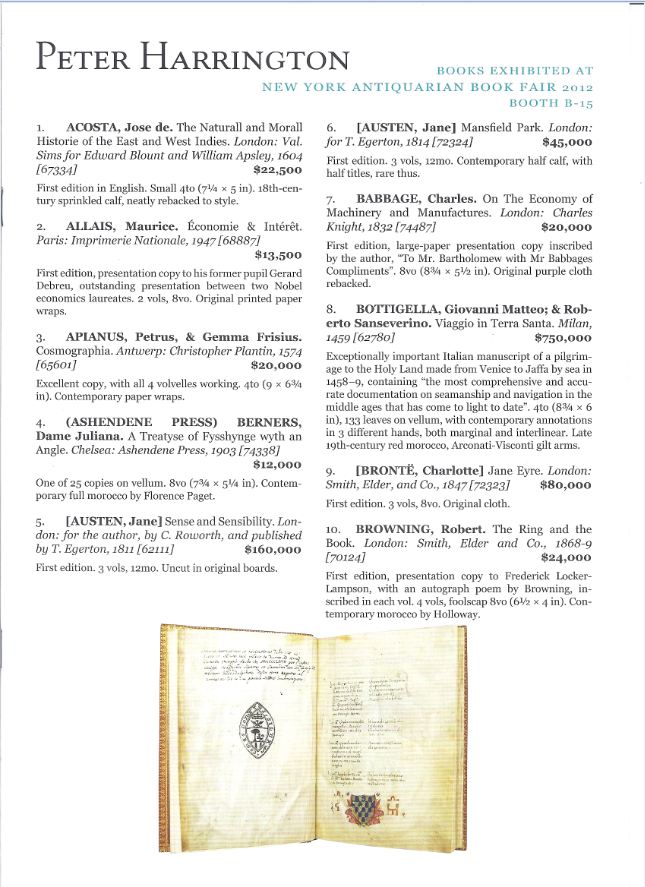 Some outstanding books from the fair.

Peter Harrington published a catalogue of Books Exhibited at New York Antiquarian Book Fair 2012. One hopes the London bookseller heavily insured this collection, as it is filled with some of the most important books you will ever find. Rather than providing thorough descriptions of a smaller number of items, as is Harrington's usual practice, this collection includes 142 briefly described items. That is acceptable, as most of these works need no introduction. You will know them well. These are a few samples.

Tom Sawyer may be one of the classics of American literature, but the first edition was published in England. Samuel Clemens, aka Mark Twain, wanted to be sure of securing an English copyright, so he had the first edition published by Chatto and Windus in London in 1876. He quickly followed with a first American edition. Item 25 is a copy of the London first. Priced at $40,000.


Here is something from Twain that is even earlier than a first edition. Item 25 is a manuscript by the author of a chapter from A Tramp Abroad, which was published in 1880. It contains 43 leaves, and consists of the 20th chapter of his book, called My Collection of Bric-A-Brac. $80,000.


Here are some more pre-edition editions. These come from the 1940s, so they reflect the technological advances of the era. They are typescripts rather than manuscripts. They are the last two novels by Agatha Christie. One is Curtain, the last case of detective Hercule Poirot, the other Sleeping Murder, the last Miss Marple mystery. These books were published in the 1970s, near the end of Christie's life, but were written around 40 years earlier. Item 15. $24,000.


Item 51 is a first edition of one of the most important political tracts in American history: The Federalist. Published in 1788, it consists of a series of essays by Alexander Hamilton, James Madison, and John Jay. However, at the time, authorship was kept anonymous. The authors, all important founders of the new republic, hoped to convince their readers, New Yorkers in particular, to adopt the newly written constitution, which had not yet been approved by the states at the time. $350,000.


Item 117 is a second edition of perhaps the most important literary work ever written, certainly the greatest of English literature. It is the Comedies, Histories, and Tragedies by William Shakespeare, better known simply as the Second Folio. Shakespeare exhibited little interest in publishing his works, or even preserving them. He simply put on plays. When he died, there was no published record of his many great works. Fortunately, a few friends and colleagues got together to preserve his creations, and in 1624, they published the first edition of this book, known as the First Folio. That is a multimillion dollar item. Eight years later, in 1632, this Second Folio was printed. Two other folio editions were published later in the 17th century before the 18th century saw the great proliferation of printing of Shakespeare's works. $625,000.


Here is another enormously valuable book that also carries the Shakespeare name. However, this Shakespeare has little to do with the man other than being named in his honor. It is a first edition of James Joyce's Ulysses. Joyce was unable to get his work published in England. It was feared too obscene for censors' eyes. So, he crossed the channel to France, where views were a bit more open at the time. There, Sylvia Beach and her Shakespeare and Company publishers were willing to take a chance on Joyce's work. Item 67 is one of 100 signed and numbered copies by Joyce. $450,000.


Item 31 is to science what those previous books were to literature – groundbreaking, extraordinarily important works. It is a first edition of Charles Darwin's On the Origin of Species. The book was extremely controversial, challenging the widely held religious beliefs of the day. Even now, it remains controversial, hard to imagine as that seems. $240,000.