Travel Books and Photographs from The Wayfarer's Bookshop 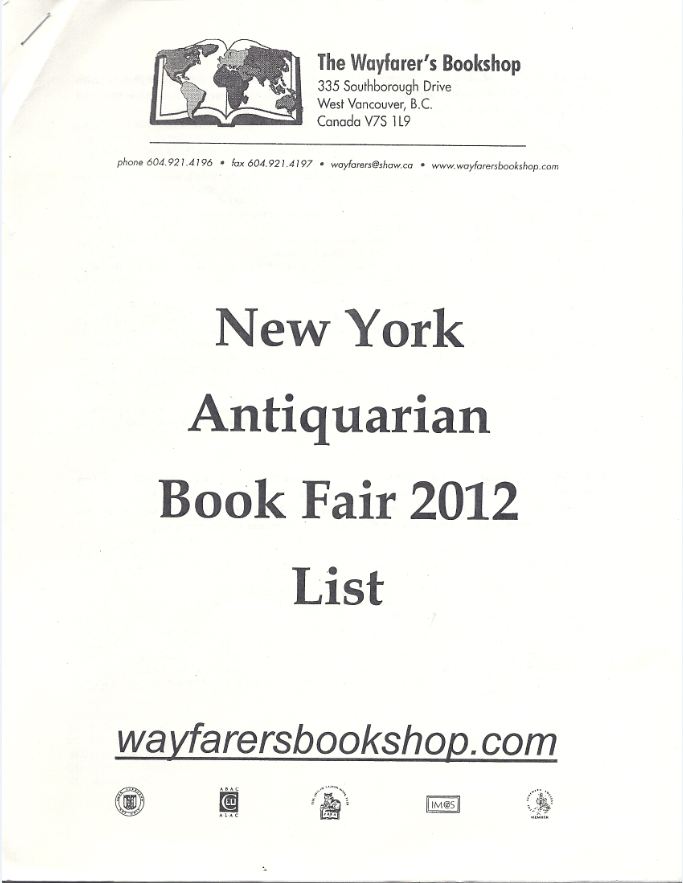 From Vancouver to New York.

The Wayfarer's Bookshop recently printed a catalogue for the New York Antiquarian Book Fair 2012. It is filled primarily with travel material. This makes sense, since Wayfarer's had to make the long trek from British Columbia, Canada, to New York. One suspects, however, they made the journey much more rapidly than most of the explorers found in this catalogue. These are mostly people who traveled the world in the days when journeys were made by boat, powered by sails. The travels were difficult, but the discoveries immense. There was still much new to be found a few centuries ago. The newer material offered is frequently in the form of photograph albums, from the 19th century to the early 20th. Here are some of these early trips.

We begin with Description du Penible Voyage... the second French edition of Olivier van Noort's circumnavigation (published in 1610). Van Noort set out for South America, to do some trading and privateering. He crossed the Strait of Magellan, and up the west coast of America as far as California. He crossed the Pacific to the Philippines, visited Java and Sumatra, and eventually returned home in 1601, three years after he started. Along the way he lost three of his ships and more than 4 out of every 5 men. It was not the most successful journey ever recorded, but it was the first Dutch, and only the fourth circumnavigation. Additionally, it was an inspiration to the Dutch, leading the way to the development of the Dutch East India Company. Priced at $27,500.


Next comes the first French circumnavigation, that of Louis Antoine de Bougainville, from 1766-1769 – Voyage autour du monde... (second and “best” edition). Bougainville settled the Falkland Islands earlier, but the French later agreeing to cede them to Spain, Bougainville delivered their possession to Spain. He then circled under South America and proceeded on to several Pacific Islands. It was his description of Tahiti that led many to conceive of it as some sort of island paradise, home to the “noble savage.” Bougainville did not make many important discoveries, but did bring back a load of information. This copy is bound with the Supplement au voyage de M. De Bougainville... This is not actually a supplement to Bougainville at all. It is the anonymously written account of Cook's first voyage by James Magra. Magra hid his identity as he published it ahead of the official account, against the Navy's rules. It was labeled a supplement to Bougainville in the French edition as it was believed this would help sell more copies to the French. $4,750.


The next major French voyager would be Jean-Francois de la Perouse. La Perouse was on an extensive journey that brought him to the Americas, Hawaii, Russia, Japan, China, and finally Australia. He visited with the British at Botany Bay, and then headed east, never to be heard from again. A few years later, the French sent out a rescue mission, under the command of Bruni d'Entrecasteaux. It never found a trace of La Perouse, but it did come back with a lot of information about Australia and the region. Serving as naturalist of that voyage was Jacques Labillardiere. This is a first octavo edition (1800) of his account, Relation du Voyage a la Recherche de La Perouse... There was also a quarto edition, which may have preceded the octavo, or may have been published simultaneously. $8,750.


Eventually, La Perouse's fate would be learned, though it came quite by accident. Peter Dillon was a trader navigating the south seas 40 years later when he was shown some goods in the Santa Cruz islands. He quickly concluded that these might have come from La Perouse's ships. He asked where they were found, and was sent to Vanikoro Island. He found the remains of the ships, wrecked on a reef, and was told they had gone down in a storm. Voyage aux Iles de la Mer du Sud... is a first French edition of Dillon's account, published in 1830. $2,500.


Here is a photographic album from what is today Zimbabwe and Zambia, but a century ago was Rhodesia. It contains 46 photos circa 1905 from British colonial rule. There are several pictures of Victoria Falls, boaters waiting to take passengers across the Zambesi River, the as yet unfinished Victoria Bridge, and views from the photographer's hotel. The area had become a major tourist attraction. There are also views from Bulawayo and other locations. There is a picture of Rhodesia founder Cecil Rhodes' grave. Rhodes had died only a couple of years earlier. $2,750.


This is a guidebook to Rome, though it may be a bit dated. It was published in 1515. Opusculum de mirabilibus novae & veteris urbis Romae was written by Francesco Albertini, a chaplain in Rome. It was to assist pilgrims to the city. It covers the topography of both ancient and modern Rome, information about the archeological excavations, a description of the Vatican Library, and more. However, what is most notable is his brief mention of Amerigo Vespucci. It translates to, “Albericus Vespulcius...first discovered new islands and unknown countries, as is plainly set forth in his book, where he describes the stars, and the new islands, as is also seen in the Letter upon the New World, addressed to Lorenzo de Medici the Younger.” $5,750.


The Wafarer's Bookshop, of West Vancouver, British Columbia, Canada, may be reached at 604-921-4196 or wayfarers@shaw.ca. Their website is found at www.wayfarersbookshop.com.