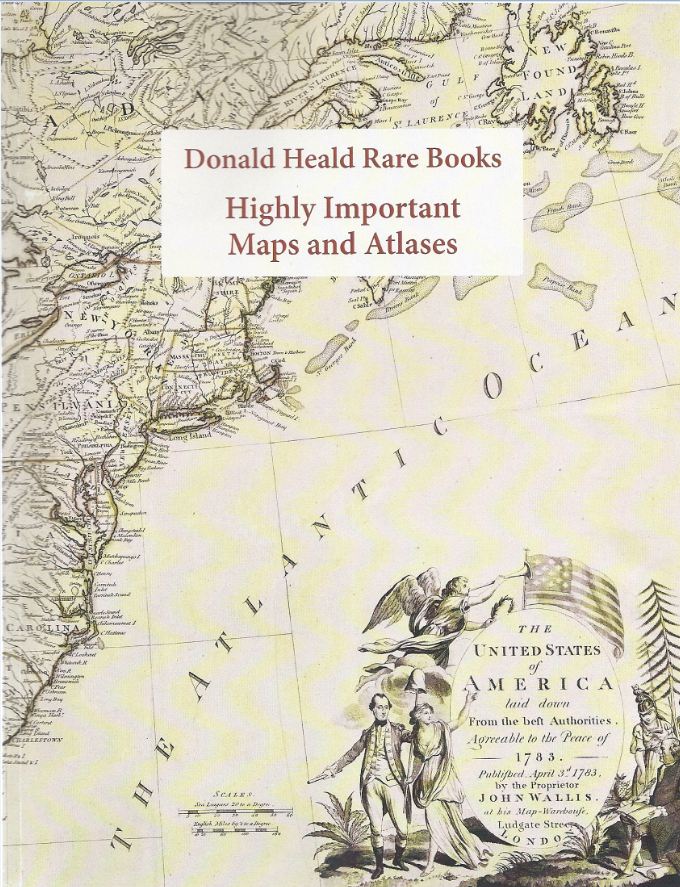 Donald Heald Rare Books has published a catalogue of Highly Important Maps and Atlases. These are, as the title says, highly important, almost all either focused on, or containing significant material relating to, the United States. They weren't necessarily the United States at the time. These maps date from 1513 to the 19th century, many predating the nation, one predating even colonial America. There are only 25 items in this catalogue, but each is described and depicted in great detail. These maps are worthy of the effort. Here are some examples.

We will start with the oldest. It is the 1513 edition of the Ptolemaic atlas Geographiae... This is the one with the great Waldseemuller maps. It contains 27 traditional “ancient” maps, along with 20 “modern” maps created by Martin Waldseemuller. The “ancient” maps depicted the world as it was known for many centuries. However, with the dawn of the Age of Discovery in the decade before Columbus, new information began to roll in at an increasingly rapid pace. The most notable of new information, at least from an American perspective, pertained to the New World. One of his maps is generally considered the first map devoted entirely to the Americas. Clearly recognizable are the northeastern portion of South America, southeastern North America, Florida and the Gulf Coast in particular, and the islands of Cuba and Hispaniola. The latter go by the names “Isabella” and “Spagnolla.” Particularly interesting is that Waldseemuller names the new continent “Terra Incognita.” When he first produced this map in 1507, he called it “America.” In this later production, he backed off of the name. It is suspected that he originally named the land in honor of Amerigo Vespucci, believing he discovered it, but when leaning that Columbus was first, decided the recognition was misplaced. Waldseemuller notes that the map is based on information provided by the “Admiral,” most often thought to be Columbus, though it might have referred to Vespucci. Item 1. Priced at $485,000.


Item 3 is A Mapp of Ye Improved Part of Pensilvania, Divided into Countys, Townships and Lotts. It would take a very large map today to break Pennsylvania all the way down to lots, but around 1688, when it was produced, there were far fewer people living there. This map was produced by Thomas Holme, and its primary purpose was to encourage immigration to the colony. William Penn had hired Holme to survey the territory, and create a map showing settlement to date. Along with the counties, townships and lots is an inset of Philadelphia, showing potential immigrants back in England that there was, indeed, civilization in this far-off land. Heald notes that this is the most detailed map of any American colony produced during the 17th century. $75,000.


Item 11 is a rare and unusual map, one of the few produced in America during the Revolutionary War: To the American Philosophical Society this Map of the Peninsula between Delaware & Chesopeak Bays... The map was produced by John Churchman, and the purpose was not to philosophize over the nature of geography. In the days before government sponsored projects, it was up to private interests through organizations such as this to promote internal improvements. The idea here was to build a canal that would link Delaware Bay with “Chesopeak” Bay. At the time, the only way to ship goods by boat from the end of one bay to the other was to go all the way around the Delmarva Peninsula, a long journey considering how close the bays were. This map was printed in 1778 or 1779, and it contains five dotted lines representing different proposed routes. Eventually, the northernmost route was chosen, but the canal did not open until 1829. $120,000.