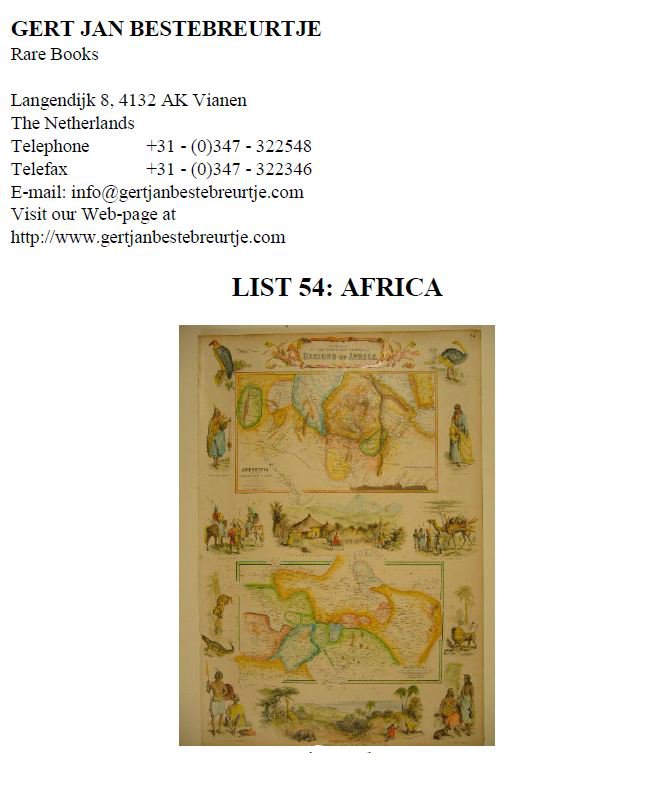 Gert Jan Bestebreurtje Rare Books has issued a new collection, titled List 54: Africa. This is Africa primarily from the 18th and 19th centuries, and Africa as seen through the eyes of Europeans. There is a copy of Leo Africanus' work, but otherwise, the writers were Europeans, so their views are more likely those of outsiders than natives. That is not to say they did not spend much time in this continent across the Mediterranean, nor come to know it well, but one's view of a different land can't help but be shaped by the experiences brought to it. That said, we do get early looks at life in Africa, first discoveries of interior lands previously unknown to the outside world, and some tell us of the worst things Europeans (and others) brought to Africa – the slave trade. Fortunately, we also hear from some of those who fought to abolish that horrible practice. Now, we will take a look at some of these books related to Africa.

The most notable of 18th century British explorers to Africa would have to be James Bruce. The Nile was long one of the world's most famous geological features, and yet its source remained unknown to the outside world for millennia. In 1768, Bruce set out to answer this age old question. He did not travel up the Nile from its mouth, but believing the source to be in Ethiopia, attacked the journey from that angle. It took several years, but at last he reached the source. However, credit for discovering the source of the Nile now resides with Speke, almost a century later. Bruce found the source of the Blue Nile, but most now consider that a tributary, with the White Nile considered the main branch. Bruce recounted his adventures in his book Travels to Discover the Source of the Nile, in the Years 1768...1773. Item 39 is a first edition, though it was not published until 1790. Many challenged the accuracy of Bruce's claims (unfairly), leading him to delay for many years before putting his story to paper. Priced at €4,250 (euros, or approximately US $5,650).

William George Browne was an aspiring writer who was fascinated by the travels of James Bruce. Having access to a decent amount of money, he dropped his pen and went off to explore the regions Bruce had visited. He left England in 1792, setting out for Egypt. After a year there, he decided to go deeper into the continent, to Darfur, in today's Sudan. It was a tough place, as it is today. He spent three years there, primarily because he was not allowed to leave. Browne was the first Englishman to describe the place. From there he returned to Egypt and then traveled on to Syria. He returned home in 1798. Browne recounted his experiences in his book Travels in Africa, Egypt and Syria, from the years 1792 to 1798. He never lost the urge to travel, taking several more trips, the last resulting in his being killed by bandits in what is today Iran in 1813. Item 38 is a second and “best” edition, published in 1806. €1,250 (US $1,665).

Here is another travelogue into Egypt and surrounding areas, though an unintentional one: A series of adventures in the course of a voyage up the Red-Sea... Author Eyles Irwin was in the employ of the East India Company when he became embroiled in a controversy involving the British Governor of India. He set off for England to explain his position, but the ship he took was captured by pirates. He was taken to various places in Egypt before a sympathetic shiekh helped him obtain his freedom and make a 340-mile trek across the desert to safety. After 11 months of traveling, Irwin arrived in England, was restored to his position, and spent the remainder of his life both as an official for the East India Company, and as a poet and writer. Item 156. €950 (US $1,266).