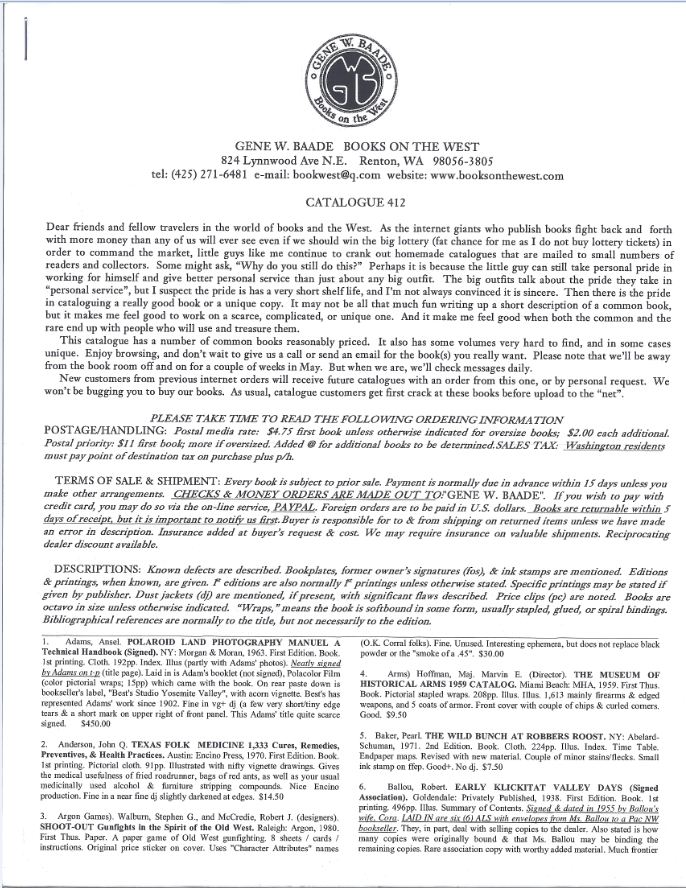 More Books on the West.

Gene W. Baade Books on the West has put together a new catalogue of works on the American West. It is a mix of books old and recent, some collectible, some for reading, on a variety of subjects related to this colorful section of the globe. As a Washington State bookseller, there are many items related specifically to the Pacific Northwest, but all sections of this land are represented, from the Canadian border to South Texas. Now, here are some samples from Baade's Catalogue 412.

We will start with the first exploratory expedition into the Pacific Northwest. That would naturally be Lewis and Clark's expedition from 1804-1806. This was territory newly acquired from France at the time, and President Jefferson wanted to know what it was he bought. History writer Reuben Gold Thwaites put together a massive compilation of material relating to this journey in time for its centennial in 1904. Fifty-five years later, this edition was reprinted, and offered is a copy of this 1959 reprint, set 250 of 700 numbered copies. The Original Journals of the Lewis and Clark Expedition 1804-1806 contains 8 volumes, including notebooks, letters, maps, and other material related to what was undoubtedly America's most important internal expedition. Item 81. Priced at $1,250.

It is a good thing Lewis and Clark did not have to investigate this territory around 15,000 years earlier. It would have been a dangerous place to be. Item 132 is Bretz' Flood: The Remarkable Story of a Rebel Geologist and the World's Greatest Flood, by John Soennichsen, published in 2008. J. Harlen Bretz was a young geologist when he began studying the unusual erosion patterns in eastern Washington. Rather than the tapered, V-shaped erosion patterns one expects from rivers, the area had a wide, rectangular shape. Bretz concluded this must have been the result of periodic massive flooding. The geologic community of the 1920s was not buying into his theory. He was subject to the usual academic attacks for a theory that contradicted the predominant belief that geologic processes are more gradual in nature. It took several decades for the community to come around, but the accuracy of his theory was finally confirmed in the 1970s. Bretz received the Geologic Society of America's highest award in 1979, at the age of 96 (he wistfully told his son, “All my enemies are dead, so I have no one to gloat over”). The explanation was that during the last Ice Age, a tall and wide ice dam formed in western Montana, creating historic Lake Missoula, a vast lake whose ice dam would periodically break, causing the great floods in eastern Washington. $30.


Item 47 is an important Native American study by anthropologist Walter Dyk, resulting from his visits to the Southwest in the 1930s: The Son of Old Man Hat: A Navajo Autobiography (1938). Dyk conducted extensive interviews, and this book is focused on those with Left Handed, an elderly Navajo, who recounts his own history and that of his tribe, some legendary, some exaggerated, but as one might expect an Indian to tell his stories to a white man. Dyk's “autobiography” is considered one of the best personal accounts of an Indian ever written. This copy has been inscribed by Dyk. $200.


Item 127 is the story of Pink Higgins, the Reluctant Gunfighter and Other Tales of the Panhandle, by Jerry Sinise (1973). John Pinckney “Pink” Higgins was a Texas cattleman, driver, and guard. He is believed to have killed at least 14 men, and yet he is not nearly as well known as gunmen with far fewer notches on their belts. That is likely because Higgins never went into self-promotion of his career. He was just into protecting his own interests and those of the people for whom he worked, and in days when legal convictions were hard to get, Higgins determined that he had to enforce the law himself. The result was a couple of notorious feuds, and a few rustlers being dealt quick justice on the spot. Offered is copy 46 of a limited Collectors Edition of 100 signed by the author. $175.